Home / Market / Mark-to-market /  Services PMI | Are animal spirits back?
Back
Share Via

Services PMI | Are animal spirits back?

Demand needs to improve for a sustained period for animal spirits to revive, says expert

The Nikkei India Composite PMI (Purchasing Managers’ Index) Output Index, a gauge of private sector activity in both the manufacturing and services sectors, climbed to a 37-month high of 54.3 in March. A reading above 50 denotes expansion from the previous month, while the one below signifies contraction. Both the Manufacturing PMI as well as the Services PMI saw increases during the month. What’s more, the Business Expectations Index, a sub-index of the Nikkei India Services PMI, has climbed to a nine-month high of 60.6 (see chart 1). Are these indications of green shoots in the economy? 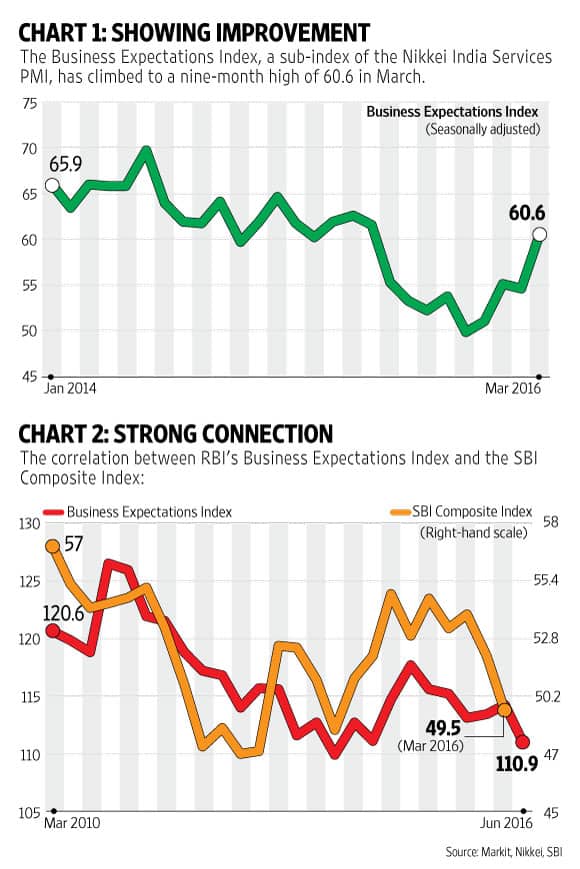 The Reserve Bank of India (RBI) also has a Business Expectations Index, part of its industrial outlook survey. Unfortunately, it shows a fall in optimism for the April-June 2016 quarter, after a rather subdued rise in the previous three quarters. Could it mean that businessmen are more optimistic about the services sector rather than the manufacturing sector?

“March PMI surveys signalled a reassuringly robust end to the financial year for the Indian economy, with sharper increases in new business spurring activity growth in both the manufacturing and service sectors," said Pollyanna De Lima, economist at Markit.

But it may be a bit too early to talk about a revival of animal spirits. Soumya Kanti Ghosh, chief economist at State Bank of India (SBI), pointed to the close correlation between RBI’s Business Expectations Index and the SBI Composite Index (see chart 2). Indeed, the SBI Composite index, a leading indicator for manufacturing activity in the Indian economy, slipped below the 50 mark for March, a portent of low growth ahead. Ghosh said that demand needs to improve for a sustained period for animal spirits to revive.

Siddhartha Sanyal, India economist at Barclays Plc, said, “PMI data can be volatile. We need to wait for a few more months to conclude on longer term trends. We are not seeing much improvement in capex and private investments yet."

“It is true that economic activity in India had been stronger than most peers, but we expect further uptick in growth to be gradual and growth trajectory can potentially follow an uneven path," added Sanyal.

The caution is supported by RBI’s latest Order Books, Inventories and Capacity Utilisation Survey for October-December 2015, which shows that while capacity utilization moved up during the quarter, it’s still at a low 72.5%.

Will a revival in the economy lead to higher inflation? The March PMI data showed a rise in output prices in both the manufacturing and services sectors. However, as capacity utilization is low, it will be a while before pricing power comes back strongly. It may also be too early to worry about inflation because the increase in prices comes after a prolonged period of deflation in wholesale prices and because deflationary forces from the slowdown in China continue.

There is one niggling doubt. Both the Asian Development Bank’s recently published Asian Development Outlook 2016 and the International Monetary Fund’s country report predict higher inflation ahead in India. RBI in its monetary policy statement also flagged the risk from the Seventh Pay Commission award.