When Reliance Jio Infocomm Ltd launched its free services, incumbents such as Bharti Airtel Ltd and Vodafone India Ltd hadn’t bothered responding with major changes in their tariff structure. After all, as they said, “How does one compete on price with free services?"

With Jio now extending its free services for another three months, that view, prima facie, has changed. On Thursday, Airtel announced two tariff plans offering free voice calls. Not to be left behind, Vodafone and Idea Cellular Ltd followed suit with nearly identical plans. Each of the plans has a validity of 28 days, mirroring Jio’s tariff plans. Jio is setting the standard for the industry fairly early in its operating history.

Analysts at Religare Institutional Research point out, “We find it a little surprising that Bharti has given in on pricing so early in the battle—Jio hasn’t even started billing its subscribers yet... Strategically, it would appear that the company is willing to toe the line on free voice calls."

It has been clear for some time now that the industry will move towards bundled tariff plans and average realizations will fall both in the voice and data segments, but the journey there is proving to be much shorter.

The silver lining, for now, is that incumbents are attempting to hold on to current average revenue per user (Arpu) levels. The plans work mainly for those with 4G handsets, where data consumption is relatively higher. It remains to be seen if they are attracted to the two new plans, which cap 4G data usage at 300MB and 1GB, respectively. 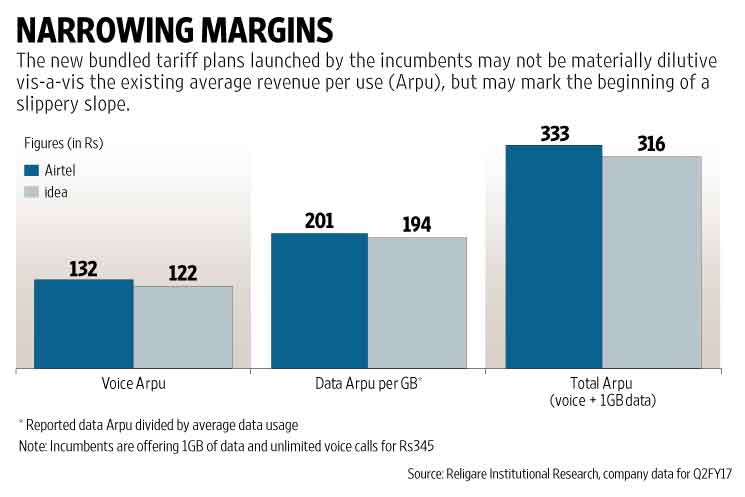 One of Airtel’s plans costs Rs345 and includes 1GB of data and free voice calls to any network in the country. Based on average realizations in the data segment, the 1GB of data is worth around Rs200. The remaining Rs145 is higher than the company’s voice Arpu of Rs132. In other words, even if customers migrate to the new plans, the voice and data Arpu of these customers will still be close to the current average. In the case of Idea, the current Arpu is materially lower than what the new plans will provide and, hence, the move will be less dilutive. But tariffs are expected to continue declining, and Idea, with its high leverage, is expected to be the worst hit. Customers who generate far higher Arpu are unlikely to migrate because of the cap on data usage at 1GB. As such, the firm expects to continue milking existing high-value customers.

Of course, this won’t last long. If Jio is able to retain a decent proportion of its customers after it starts charging for its services, incumbents will need to quickly calibrate their tariffs. Analysts at Morgan Stanley Research said in a recent note to clients, “In Q1 FY18, once Jio starts charging customers, we expect 50% of its subscriber base to convert to paying customers, and expect the company to have a 35% share of the industry’s data volumes."

If incumbents drop tariffs sharply to counter the Jio threat, some of them could even end up in losses. Morgan Stanley’s analysts are currently assuming incumbents such as Bharti and Idea will have tariffs that are 35% higher than Jio’s. But they point out that if the premium narrows by half to 17.5%, that would shave off 5-6 percentage points from the operating profit of incumbents, and that Idea could even end up in losses, given its high leverage.

Needless to say, incumbents will be hoping that the conversion ratio of paying subscribers at Jio will be far lower. But even while everyone waits for that outcome, it’s increasingly clear that they need to work harder in controlling costs, and, more importantly, push for consolidation in the sector.