There will be some initial struggle with scrapping of Rs1,000 and Rs500 currency notes but systems are in place to move to a cashless economy

Your two high-value notes—Rs500 and Rs1,000—are dead. Prime Minister Narendra Modi, in a sudden move, has demonetised the two notes to suck out black money from the country and hit at the counterfeiting industry that finances terrorism. It is a bold step for a cash-based economy, which currently sees 80% of value transactions through these two currency notes. With this move, not just the money in your wallet, your assets will also be affected in many ways. This is what you need to know.

Cash isn’t the only currency

This move means you will have less cash at hand to spend for the next couple of weeks, as lesser currency notes will be in circulation.

Hence, try and use cards and online options instead of cash. The direction that consumers and the retail public should go towards, according to the financial planners and experts, is cashless.

“We should make an attempt to reduce cash outgo. Start using cheques to pay your vendors and better still, start depositing money in your domestic help’s bank account. See if you can get them to move into the banking system," said Rohit Shah, an investment adviser registered with the Securities and Exchange Board of India (Sebi), and founder and chief executive officer of Getting You Rich. He said the move is set to transition to a cashless economy.

Remember that notes of Re1 to Rs100, and all the coins, remain legal tender and are not affected. ATMs in some places will remain closed on 10 November. Also, there is a withdrawal limit of Rs2,000 per card per day till 18 November, with an overall weekly cap of Rs20,000. This limit doubles to Rs4,000 per card per day after 19 November.

You can also use your cheque book to withdraw up to Rs10,000 a day from your bank, with a weekly limit of Rs20,000. If you have a stash of cash at home, you can deposit the money in the bank account. There is no need to panic. The government is giving you enough time to change your old Rs500 and Rs1,000 notes. You have a 50-day window—from 10 November to 30 December—to exchange these at a bank branch.

If, due to any circumstances, you are unable to exchange the old notes by 30 December, you can still exchange them by providing proof of identity and a declaration, till a date that would be specified by the Reserve Bank of India (RBI) later. All the cash withdrawals at ATMs till 30 December will be free of cost to customers. There are multiple options to transact without cash. Use your cards—credit and debit card—for as much as possible for your offline and online purchases. If you have to send money to someone, use national electronic funds transfer (NEFT), real-time gross settlement (RTGS) and immediate payment service (IMPS) through internet or mobile banking. An e-wallet is another payment instrument that you can use by preloading money. Remember that these wallets have transaction limits and validity periods. You also have the option to make payments using unified payments interface (UPI).

For the non-resident Indians (NRIs) who have Indian currency, the move to demonetise Rs500 and Rs1,000 notes may spell hardships. As per a clarification issued by RBI, the recourse for NRIs is to deposit the specified bank notes (Rs500 and Rs1,000) to their non-resident ordinary rupee (NRO) account. “But what happens if the person doesn’t have the bank branch in her country of residence? And more importantly, will the foreign branch accept rupee notes? These are some problems that NRIs will struggle with,"said Gautam Nayak, a chartered accountant. “Also, an NRI can’t keep more than Rs25,000 in currency so that also needs to be kept in mind," he added.

It’s going to be a tricky situation. According to Jose K. Mathew, head-retail business, Federal Bank Ltd, the recourse will be to deposit the money once back in India.The bank currently has over 2 million NRI customers. He further explained that you can’t deposit cash in NRO account from a foreign country.

This has some NRIs worried. Praveen Gairola, an IT professional based in San Jose, US, keeps some Indian currency notes with him. “Normally, we keep about Rs5,000 in cash.... This time around we have Rs15,000 mostly in the denomination of Rs500. I would like to deposit the money but I don’t have an NRO account. I only have a non-resident external (NRE) account," he said.

“Normally, people don’t carry Indian currency abroad. However, in case they have Indian currency notes (Rs500 and Rs1,000 notes) with them, they will have to deposit the money once they are back in India. Else, they can send it to relatives or friends and ask them to deposit on behalf of them," Mathew said. Also, as of now RBI has not given a specified deadline to convert these notes.

However, if you are a foreign tourist in India, you can purchase foreign exchange equivalent to Rs5,000 using these high-denomination notes at airport exchange counters till 11 November, with proof of purchasing these notes.

“This starts right from the time the land is bought. It’s mainly cash that changes hands, whether it’s purchase of land, conversion, administrative pay offs or getting approvals or even buying construction material," he said. So by the time the land is developed, a lot of cash has already changed hands and the developer expects to make good the cash transaction by accepting cash deposits by buyers. On the current inventory, Zia said, ideally the move restricting cash should result in the seller demanding higher amount for the loss that he or she will have to bear by not getting a chunk of the total amount in cash.

“However, the market is not very kind at present. Moreover, no one will give that much money in cash. So the only option left with the sellers is to sell at the declared value," he said. 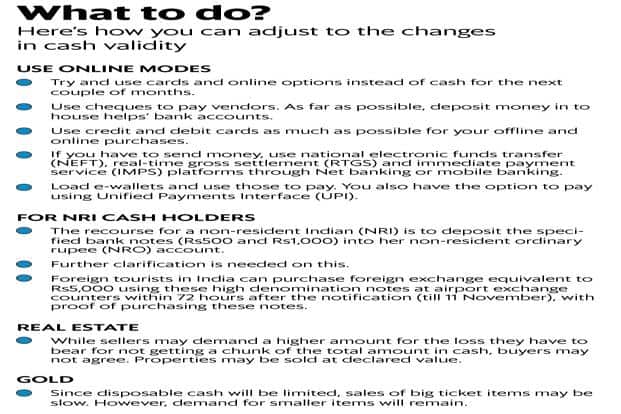 In the backdrop of the US election results, international gold prices moved up 3.2% on Wednesday morning to $1,315 per ounce. Contrary to the move in price, due to demonetisation of currency, there might be a fall in the near-term domestic demand for gold. The impact is likely to be immediate as most gold jewellery sales in India are through cash. Data from the World Gold Council (WGC) says, jewellery demand in India for the first 9 months of 2016 is down 30% over the last year. This can fall further till the end of December.

In a statement issued before the demonetisation, Somasundaran P.R., managing director, India, WGC, noted that among other things, the need for a permanent account number (PAN) for purchases above Rs2 lakh contributed to subdued demand in recent months.

According to Mehul Choksi, chairman and managing director, Gitanjali Gems, “To the extent that disposable income (in cash) will be limited, sales of big ticket items will be slow. However, we expect smaller ticket items to go on selling." The limited window given by the government, till midnight on 8 November, was utilised by many to accumulate gold jewellery. “...we witnessed a week’s worth of sales between 8:30 pm and 10 pm (on 8 November) across locations," said Choksi. Once the new currency is in full circulation, demand may pick up at a faster rate. The sudden demonetisation has rendered large piles of currency worthless, which gives gold an edge over cash as a safeguard for value. According to Sudheesh Nambiath, lead analyst-South Asia and the UAE, precious metals, GFMS, Thomson Reuters: “Once currency is released, demand for gold can come back. Now people are aware of the worst-case scenario if cash is left idle and not held in form of a physical asset like gold." He added there may even be some backdating of bills at jewellery stores for large-ticket buys.

Financial planners believe that more money will now be channelised into financial savings. “The impact of this move is that now people will have to start depositing their excess cash in bank accounts. This, over a period of time, will create white capital in the economy, which can then be properly channelised towards stock markets and mutual funds," said Kalpesh Ashar, certified financial planner and founder, Full Circle Financial Planners and Advisors.

He said that it is a well-calculated move as the government has been dropping enough hints to get rid of the unaccounted money. With stock markets falling sharply, this could well be a good time to invest in equities, he added.