What does the handshake between WPI, CPI inflation mean?

Have Indian markets conditions turned perfect with every rupee change at the producer level finding itself transmitted to the final consumer?

Does that mean Indian markets conditions have turned perfect with every rupee change at the producer level finding itself transmitted to the final consumer?

Before we get to the answer, let us understand the differences between both indices. The WPI and the CPI baskets are different, both at the weightage assigned to food, fuel and manufactured items as well as at the broken down level of these segments. The weight of food in CPI is far higher at 46% than in WPI at 24%.

The WPI inflation does not capture price changes of services but the CPI does. These being so, there was a huge divergence between the two indices. But the adjoining chart shows there is more to the story as the key divergence stemmed from a collapse of fuel component in WPI, while the fuel component held up in CPI.

This means that global oil price collapse got transmitted first at the refinery level, and far later at the pump level. This should not be surprising as in any imperfect market, changes in producer prices get transmitted to consumers with a lag and, probably, not to the full extent. 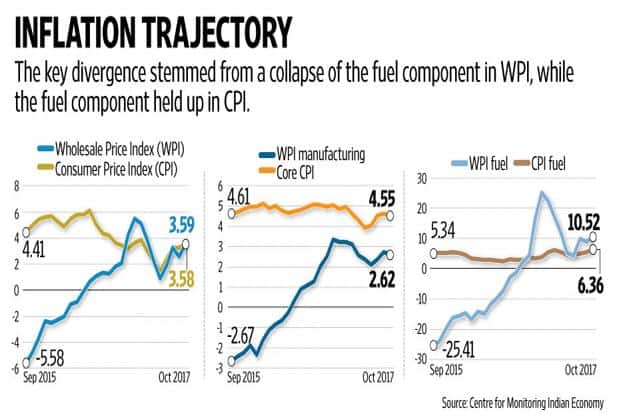 The two have met now, after beginning to converge from April 2016 onwards. So, to answer whether producers have transmitted every rupee change to the consumer, we should look at the divergence in WPI and CPI at the broken down component level.

The manufactured products inflation in WPI is comparably closely with the core CPI. There is still considerable divergence here. The divergence in fuel inflation under both the indices is still more than 4 percentage points. Also, historically, the movement of the WPI is a harbinger to where the retail prices would be in the months to come.

The rise in WPI inflation tells us that retail inflation will rise further, something that the RBI has been warning about.

It is time that we look at the WPI inflation closely again.