Data from US Commodity Futures Trading Commission showed last week that leveraged funds increased their euro positions to “net long" in the week ended 13 June for the first time in more than three years.

The euro is the top-performing Group-of-10 currency versus the dollar this year, climbing more than 6% and set for its biggest annual increase since 2007. JP Morgan Asset Management has increased its exposure to the euro and European equity markets in the past few months, while Western Asset Global Management Ltd, which has been underweight the shared currency since 2011, began buying it in December and boosted its position through April.

Emmanuel Macron’s victory in French parliamentary elections, an agreement between Greece and its creditors to release new loans, and the defeat of the anti-establishment party Five Star Movement in the local vote in Italy are making investors more confident on the outlook for the shared currency.

That compares with earlier in the year, when concerns over the rise of populism across Europe rekindled speculation of a possible breakup of the currency bloc. Bloomberg

Rail Exim (export-import) container volume for May 2017 has been lacklustre, implying continued loss of market share to roadways. Nomura Research pointed out that rail Exim volumes were flat, while in terms of net tonne kilometre, it was a decline of 5%. 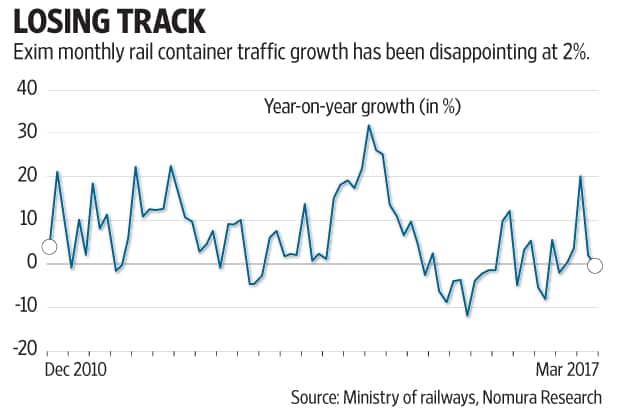 “This highlights not only poor volume growth, but also a further decline in lead distances," said Nomura.

Lead distance is the average distance in kilometre for which the container travels.

This is at a time when Exim trade and physical port volumes showed strong growth (though not as strong as in April).

There is no clear evidence whether an increase in real interest rates impacts financial savings.

State Bank of India’s (SBI’s) research wing notes that empirical evidence in economic literature for India is mixed regarding the impact of real interest on financial savings. “Inflation adjusted deposit rate (i.e. Real interest rate) for FY17 was at 15-year high at 3.2% due to low inflation, and will remain high as the inflation scenario for FY18 is quite benign," said the SBI note.

Also, the substitution effect of real interest rate is more than the wealth effect leading to overall negative impact of higher interest rates on savings rates.

However, the actual coefficients are significantly small and insignificant in most of the cases, added the note.