The Nehruvian rate of growth

Opinions about Jawaharlal Nehru’s contribution to modern India differ sharply. It’s true that his legacy, for good or for bad, goes far beyond what can be captured by the bare bones of economic analysis. Nevertheless, for a nation steeped in abject poverty, what matters most are economic growth and a better standard of living for its people.

How did India under Nehru compare in terms of growth with other countries? The accompanying chart compares India’s gross domestic product (GDP) growth per capita in 1990 international dollars over 1947-64, when Nehru was prime minister, with that of several other nations over the same period. The data are taken from economic historian Angus Maddison’s time series on world GDP. 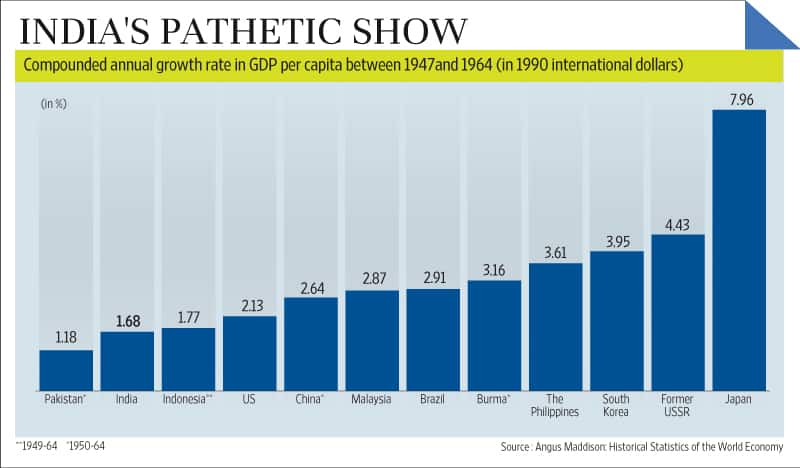 The numbers show the compounded annual growth rate (CAGR) for real GDP growth per capita for India was lower than for capitalist economies like Japan, South Korea and the US. That is unsurprising. What may not be so well known is that it was also lower than communist countries like China or the former USSR. Between 1947 and 1964, the CAGR for Japan’s GDP per capita was a sizzling 7.9%, for the USSR 4.4% and for India 1.68%. Also, India’s record was worse than the Philippines or Malaysia. Even dirt-poor Burma (now Myanmar) clocked a CAGR of 3.16% between 1950 and 1964.

What about poverty reduction? Gaurav Dutt and Martin Ravallion, poverty researchers from the World Bank, wrote in an article in the Economic and Political Weekly in 2010, “There was little sign of sustained progress against poverty until the mid-1970s."

There are, however, two silver linings. One is that India under the British had a pathetic per capita GDP CAGR of 0.07% between 1900 and 1947. The second is the Indian per capita growth rate was better than Pakistan’s, which had a CAGR of 1.18% between 1950 and 1964. But that is unlikely to have been much consolation for India’s impoverished masses.