Finance minister Arun Jaitley has said that indirect tax receipts are up 25% in the April-December period.

A key element in indirect taxes is excise duty. It’s worth mentioning that the hike in excise duty on petrol and diesel contributed immensely to overall excise collections in the past couple of years. 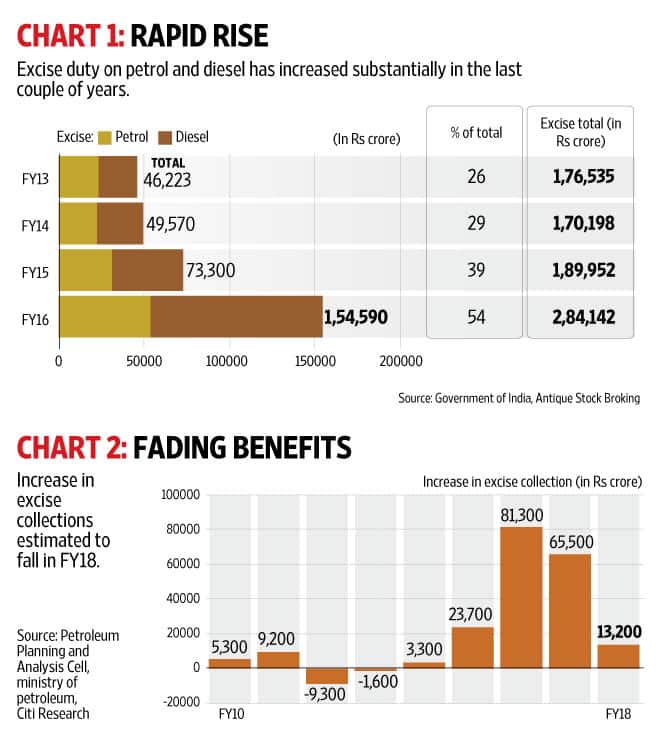 This factor has helped immensely. As can be seen from chart 1above, contribution from excise duty on petrol and diesel to overall excise collection has increased to 54% in fiscal year 2016 from 39% in FY15, which in turn was much higher than the 29% a year earlier. What’s more, economists expect the measure to inch up further this year. Clearly, it is the rise in excise duty collection from petroleum products that is boosting the government’s tax kitty.

On a combined basis, excise collections from petrol and diesel increased a massive 111% year-on-year in FY16. The current year won’t disappoint either.

According to Citi Research, the government’s excise collections are estimated to have increased by Rs81,300 crore in FY16 (0.6% of gross domestic product, or GDP) and Rs65,500 crore in FY17 (0.4% of GDP) even while the government left the excise duty unchanged (on petrol and diesel) in FY17.

But while all this has helped so far, the situation may get trickier in the near future. Chart 2 shows the increase in excise collection is likely to drop substantially in FY18. Citi expects no change in excise duty in FY18.

However, we must remember that crude oil prices are showing strength. “In the event crude price increases substantially above our estimate, and government decides to roll back some of the excise duty hike, the impact could be significant," pointed out Citi Research in a note on 9 January. The firm estimates every Re1 per litre decline in excise duty (for both diesel and petrol) would result in a revenue loss of Rs13,000 crore for the government.

Simply put, there is a risk to the additional cushion that was available to the government in the last three years, in FY18.

“This poses not only a risk to the fiscal but also the government’s ability to support growth," said Citi Research. Further, with domestic retail fuel prices inching towards all-time highs, consumers’ purchasing power for non-fuel items could also be negatively impacted.