Apart from the long gestation period of investments, RCF needs to cope with a huge pipeline of capex

Shares of Rashtriya Chemicals and Fertilizers Ltd (RCF) have been outperforming the broader markets since reports that the cabinet committee on economic affairs has approved a policy that will increase incentives for firms setting up new urea plants. A Press Trust of India report says the new policy will let fertilizer firms earn a post-tax return of 12-20%.

Earlier, the returns were capped at less than 12%.

Also, the government has reportedly agreed to cover the entire cost of natural gas, the main feedstock for urea. The initial proposal was to cap the gas subsidy till $14 million British thermal units. 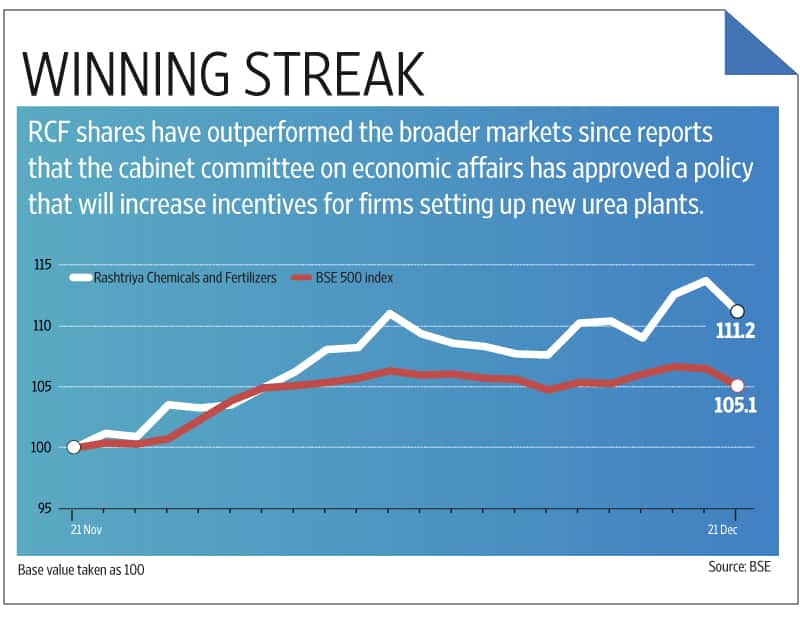 The policy, once implemented, will make urea manufacturing more lucrative. Chambal Fertilisers and Chemicals Ltd, Tata Chemicals Ltd and RCF have plans to set up new urea factories. Of them, RCF has concrete plans to add 7,700 tonnes per day (tpd) worth of new urea capacities in India—3,850 tpd each at Thal (Maharashtra) and Talcher (Orissa). While other companies are yet to finalize the investment plans, the new plants will help RCF earn higher returns on investment.

That said, it will be a while before the benefits of new urea policy percolate into RCF’s earnings.

Apart from the long gestation period of the investments, what the company also needs to cope with is the huge pipeline of the capital expenditure.

According to Emkay Global Financial Services Ltd, RCF has a total capital expenditure plan of ₹ 18,700 crore lined up over the next five years.

Even though the company is setting up plants in Ghana and Talcher through joint ventures, the huge capital expenditure (capex) means that it has to take on more debt and widen the equity base, which could weigh on the return ratios.

“RCF has chalked down aggressive capex plans totalling ₹ 187 billion, which is spread over the next five years and to be funded through a mix of debt, equity and under joint ventures," Emkay Global Financial Services said in a note. “Considering the company’s current MCAP (market capitalization) of ₹ 30 billion and EV (enterprise value) of ₹ 38 billion, this huge capex is likely to keep return ratios under pressure till the completion of capex."

Infusion of fresh capital or monetization of the land bank in Mumbai will help RCF keep leverage under check. But for a state-owned company, expanding its equity base could be time consuming. According to reports, the government may divest 12.5% stake in the firm to comply with listing norms. While the stake sale increases liquidity in the shares, the government should concurrently allow the company to raise the equity base.

The company, meanwhile, is expected to report better operational performance for the second half of the current fiscal year on de-bottlenecking of the urea plant and investments in backward integration.

While the stock price is reflecting the optimism, funding concerns could cap the gains.