Deals in recent years show this to be one of the more expensive buys, on an enterprise value per screen basis

Multiplex owners have been in consolidation phase for a while now. PVR Ltd is raising its stakes in the industry, with a ₹ 500-crore purchase of DT Cinemas. Though the deal will add to PVR’s size, shareholders seemed unimpressed and the stock lost 3.7% on Wednesday, in contrast to gains in the broad market.

One reason could be pricey valuations. Deals in recent years show this to be one of the more expensive buys, on an enterprise value (EV) per screen basis. EV is the sum of equity plus net debt (debt less cash and liquid assets). The PVR-DT deal is the highest in recent deals at ₹ 12.8 crore per screen. In fact, PVR’s 2012 acquisition of Cinemax was at a third of this level.

But this is just one metric and analysts reckon a better yardstick would be EV/Ebitda. This shows how many times of profit a business being acquired for. At the same EV level, the payback period of a more profitable business will be shorter.

“Our calculations reveal that PVR has consummated the deal at 12.5x FY17E EV/ EBITDA, which, we believe, is expensive," said IDFC Securities Ltd in a note. Ebitda stands for earnings before interest, taxes, depreciation and amortization. IDFC Securities assumes that all of DT Cinemas’ 39 screens (including 10 new screens that DT Cinemas proposes to add in the National Capital Region) will be operational by FY17. But more recent deals in the industry have been at a higher EV/Ebitda level, which may explain why PVR had to pay the price it did. 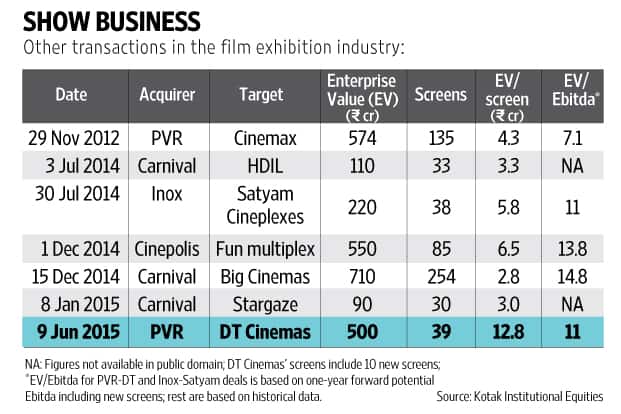 PVR may have also wanted to keep competition at bay. IDFC notes that DT was the only premium asset (with cinemas at prime locations in the NCR) left to acquire, after PVR’s failed attempt to acquire South-based Sathyam Cinemas.

The deal strengthens PVR’s presence and improves its market share in the Delhi-NCR region, and eventually, a higher share and more screens in premium locations could also lead to better ticket prices. PVR has 467 screens and DT Cinemas operates 29 screens and proposes to add another 10 in a year. The funding for the deal is not known yet and more clarity may come later.

As on 31 March, PVR’s consolidated debt (long-term borrowings plus short-term borrowings) stood at ₹ 667 crore while its current investments and cash and cash equivalents stood at ₹ 26 crore. PVR’s debt-to-equity ratio works out to 1.6 times. Analysts expect the company to finance a sizeable portion of the deal through equity.

The deal also comes when weak content is playing spoilsport with the multiplex business. Not surprisingly, PVR’s shares have declined by 3% so far this fiscal year. While the acquisition will add to revenues, PVR’s fortunes depend more on better content quality and an increase in discretionary spending by movie-going consumers.