"storyDirectUrl"
OPEN APP
Home >Opinion >Will the rally in bonds come to the rescue of Indian banks?

Will the rally in bonds come to the rescue of Indian banks?

The Reserve Bank of India's (RBI) altered liquidity strategy has further fanned a rally, which started in mid-June when Governor Raghuram Rajan said he would step down

In the early 2000s, when Indian banks were bogged down with a pile of bad loans, one factor that came to their rescue was a sharp decline in bond yields. Banks, who are the biggest holders of government bonds, took advantage of the surge in bond prices to book gains on their portfolio of government securities and used that money to provision against bad loans.

In 2002-03, gross non-performing assets (NPAs) of the banking sector were at about 8.8% (not far from the 7.6% reported at the end of March 2016). Coincidentally, that was also a period when bond yields fell sharply from about 8% in May 2002 to under 5% in October 2003. Apart from a clean-up drive through recoveries, banks generated funds through bond sales and increased provisions to strengthen their balance sheets. Bond price and bond yield move inversely proportional to each other.

Nearly a decade and a half later, you could see a similar story play out if banks are nimble enough to take advantage of the current rally in the bond markets.

The Reserve Bank of India’s (RBI) altered liquidity strategy has further fanned a rally, which started in mid-June when Governor Raghuram Rajan said he would step down. Serendipitously, Britons voted to exit the European Union, which extended the gains on bond prices across all markets, including India. Just as markets were sobering down, Rajan, in his latest policy statement, said that the central bank had only managed to reduce about 40% of the structural liquidity deficit in the system. What this meant was that seasonal factors aside, the RBI will continue to throw cash at the system by buying bonds through the so-called open market operations. 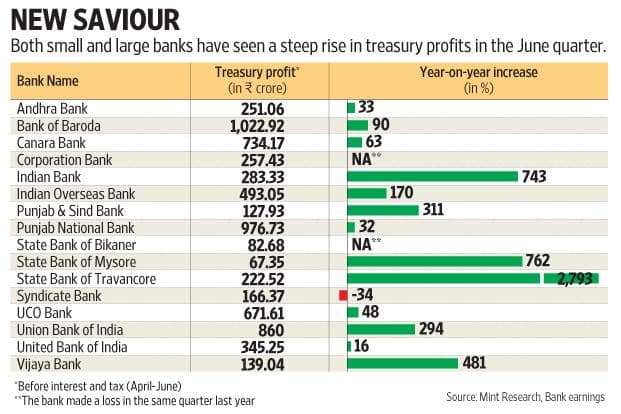 In the three trading sessions since the policy, the 10-year yield has fallen by another 10 basis points to 7.08%—its lowest level in seven years. One basis point is one-hundredth of a percentage point. It looks like the trend may extend further. Nomura, for instance, believes that the 10-year yield could move to 6.95%. Some others believe yields could move even lower to 6.75% by early next year.

The rally in bond prices means that banks could, well, laugh all the way to the bank if they choose to. Over the last 12-18 months, when credit growth has been slow, banks have parked a lot of their excess funds in government securities. Many have exceeded the minimum statutory liquidity ratio (SLR) requirement of 21%. In February, an RBI working paper, which discussed the challenges of effective monetary policy, had highlighted this excess government bond holding of banks in the context of monetary transmission.

At the time, when SLR was at 21.5%, banks had excess SLR holdings of 5.5 percentage points. “It is worth pointing out that given the approximately 4 percentage point spread between the average lending rate of public sector banks and 10-year government securities, the back-of-the-envelope (risk unadjusted) losses implicit in these excess SLR holding of public sector banks in the fiscal year 2014-15 amounted to around $17 billion (~1.14 trillion)," said the RBI working paper.

Given the low credit demand, banks may not have the option to deploy the money generated through bond sales into lending but they could use some of it to increase provisions or improve profitability. For the record, in fiscal 2016, state-owned banks reported over 17,000 crore in aggregate losses compared to profits of 38,000 crore in financial year (FY) 2015. So there is a big hole to be filled and treasury profits can be used to fill it. There is some evidence that this is happening already. On Tuesday, 9 August, the day bond yields rallied in response to the RBI’s comments on liquidity, state-run banks sold a record amount of government bonds. Data from the Clearing Corporation of India Ltd (CCIL) showed that government banks sold nearly 13,000 crore in bonds that day—the largest amount sold on any single day on record.

Some of the smaller banks have seen even steeper jumps. Indian Overseas Bank, which has a gross NPA ratio of 20%, appears to have actively booked treasury profits during the June quarter, which probably saved it from a much larger loss. Treasury profits at the bank surged more than 700%. Others like State Bank of Mysore and State Bank of Travancore seem to have followed a similar strategy (see chart).

The simple point is that if banks use this bond market rally well, they can ease the pressure on profitability and speed up the process of strengthening their balancesheets just like we saw in the 2002-03 period.