Home / Money / Calculators /  Crypto-currencies: are they safe to use?
Back
Share Via

Crypto-currencies: are they safe to use?

Bitcoins have been around since 2009 and are still far from the financial mainstream. There is a need to clear the regulatory and security haze around them

On 19 September, a U.S. federal judge ruled that bitcoins qualify as money. This decision was linked to a criminal case where the accused hacked into the systems of JPMorgan Chase & Co and some other organisations, Reuters reported.

So, if you possess some bitcoins or are planning to venture into this space merely out of curiosity, you need to remember that as of now, crypto-currencies like bitcoins are not regulated in India.

Here is what you should know about bitcoins before you plan to hold some in your wallet. We also look at the regulations, cyber threats and taxation of crypto-currencies.

In 2013, the Reserve Bank of India (RBI) had cautioned the users, holders and traders of virtual currencies, including bitcoins, about the potential financial, operational, legal, customer protection and security-related risks that they could expose themselves to (http://bit.ly/2cpQmkz). “The creation, trading or usage of virtual currencies including Bitcoins, as a medium for payment are not authorised by any central bank or monetary authority," RBI had stated.

In an email on 22 September,the RBI told Mint that the central bank’s stance on these currencies has not changed.

Two years after the 2013 cautionary note, in December 2015, the RBI spoke about looking into blockchain—the underlying technology of bitcoin. And in June this year, it spoke about setting up a committee to study the benefits of blockchain technology for banks.

“It’s not easy to regulate a technology that is as disruptive as bitcoin, since it’s highly decentralised. But we know for a fact that the RBI is not ignoring bitcoin and blockchain technologies, and intendS to regulate it. Last heard, the RBI is aiming to regulate crypto-currencies by 2017," said Mohit Kalra, chief executive officer and founder, Coinsecure, a Delhi-based bitcoin exchange and trading platform. 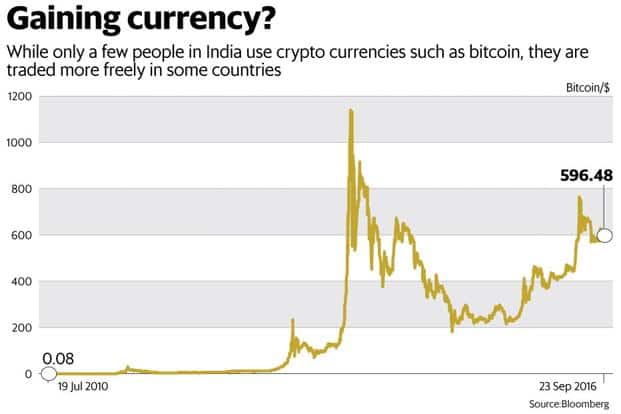 Besides regulatory concerns, bitcoins have been vulnerable to cyber frauds globally. “Bitcoins have been reported to be exposed to several frauds in the past. Users have lost money to fraudulent sellers," said Kalra. In August, Reuters reported that hackers penetrated a secure authentication system at a bitcoin exchange called Bitfinex, and stole about $70 million worth of the virtual currency. But that may be just the tip of the iceberg.

According to a study that was shared with Reuters, and was done by Tyler Moore, assistant professor of cyber security at the University of Tulsa’s Tandy School of Computer Science, funded by the U.S. Department of Homeland Security: between bitcoin’s creation in 2009 and March 2015, 33% of all bitcoin exchanges were hacked.

Hence, if you are a user, you have to be careful. “Users have to take care of their digital wallets," said Mupparaju Sivakameswara Rao, chief executive officer, BTCXIndia, a Hyderabad-based bitcoin exchange platform.

“In India, I don’t see any benefit of using bitcoins unless you are speculating or you already have bitcoins and want to transact. Also, no one knows about the cyber security mechanisms of individual companies," said Amit Jaju, executive director, fraud investigation and dispute services, EY India.

Bitcoins in India are mostly used to trade, to make payments for overseas transactions and to convert into Indian currency.

If you profit from trading in bitcoins, how will you be taxed? The crypto-currency industry lacks consensus on this issue.

“The person who invests in bitcoins shall be subject to capital gains tax," said Sandeep Goenka, co-founder, Zebpay, an app-enabled bitcoin exchange.

“It does not come under capital gains tax in India because Sebi (Securities and Exchange Board of India) and the government don’t consider bitcoin as a security. Users may declare it as income on digital assets and pay tax as on other normal asset incomes," said Rao.

According to Gautam Nayak, a Mumbai-based chartered accountant, “It is an intangible asset and taxation will depend on the frequency of transactions. If you are buying (for) trading, then it will be considered as business income and taxed accordingly. However, if you are buying it for investment, it will attract capital gains tax—at 30% for short term and 20% on long term."

Others suggest that it is better to wait for clear directions from the RBI before buying bitcoins. “One would have to wait and watch the direction the regulator wants to take in the future, before venturing into this space," said Vivek Belgavi, partner, financial services—fintech and technology consulting leader, PwC India.

Mint Money does not recommend buying bitcoins for investment purposes or otherwise. However, if you still want to venture in this space, tread with caution.