Analysts expect economic growth to moderate from 8.1% in Q2 due to the impact of higher interest rates and elevated oil prices

New Delhi: India is likely to retain the tag of “world’s fastest growing economy" when the Central Statistics Office releases Q2 GDP data today, amid a political storm kicked up by the release of the GDP back series data.

Analysts expect economic growth to moderate from 8.1% in the second quarter due to the impact of higher interest rates and elevated oil prices. That is still faster than China, but a come down from the more than two-year high of 8.2% set in Q1. Some economists foresee the slowdown continuing through to 2019 Lok Sabha elections at least. 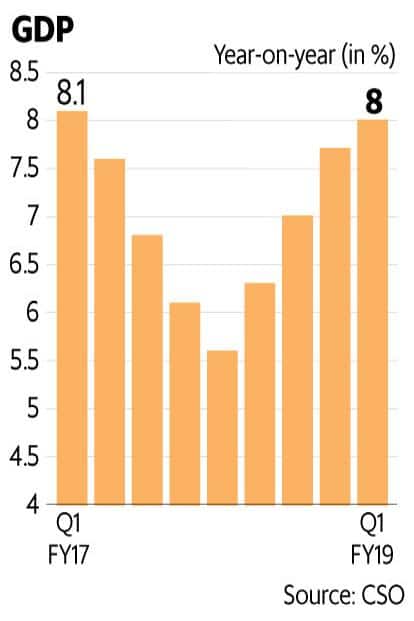 “The Indian economy is likely to slow down in the second half of the current fiscal year (ending in March)," A. Prasanna, chief economist at ICICI Securities Primary Dealership in Mumbai said. Prasanna was cautiously optimistic about the outlook, but much would depend on the election outcome. “Any signs of political uncertainty could affect market and business sentiment," he said.

India’s economic growth under the previous Congress-led coalition government was slower than estimated earlier and was never in double digits, according to the revised GDP numbers released by the government on Wednesday. The new GDP data, pertaining to the years between 2005-06 and 2011-12, has sparked off a heated exchange between the Congress and the ruling BJP over the performance of the economy during their respective terms.

Union finance minister Arun Jaitley has defended the new series, calling it more inclusive and far more representative of the Indian economy. He also rejected suggestions that the new numbers were in any way influenced by the NDA government. 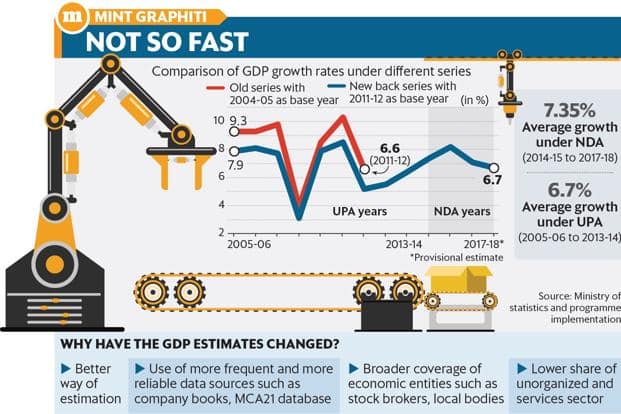 “The CSO is a highly credible organization. It completely maintains an arm’s length distance from the finance ministry," said Jaitley. “We come to know about the data only after it is finally released. All individuals who had headed CSO are of the view that this data is far more reflective of the situation in the Indian economy and therefore has far more credibility," the finance minister said.

Mohanan said the NITI Aayog seems to have raided through the “round table" and that the release of the data by the NITI Aayog is not the usual procedure. “The CSO (Central Statistics Office) has not followed the usual procedure of release. It is slightly unusual for me," he added. Mohanan, a member of the NSC, is serving as its chairman after Radha Binod Barman retired on 31 July.

An economy held back

Several factors conspired to hold the Indian economy back during the middle of this year, namely; a weak rupee, and a squeeze in India’s shadow banking sector that hindered both investment and consumption. At least one handicap has been removed as oil prices have come down sharply from their heights of earlier in the year. But data for industrial production, vehicle sales, and tourism arrivals has made disappointing reading. 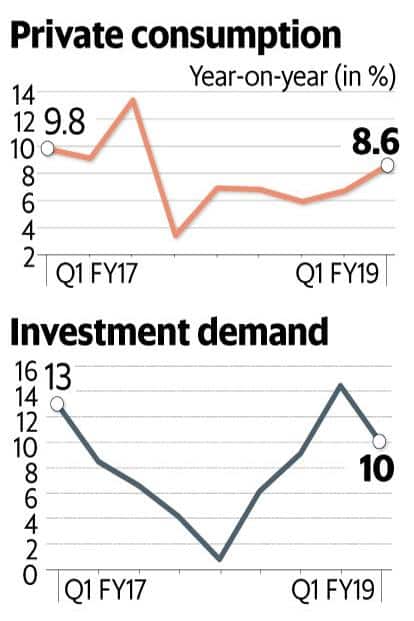 “India’s growth is likely to soften in the September quarter, given the dismal consumption and investment trends following a liquidity squeeze in the shadow banking sector," said Charu Chanana, emerging Asia economist at Continuum Economics in Singapore.

The Reserve Bank of India has forecast economic growth of 7.4% for the financial year ending in March, recovering from 6.7% in the previous year, slowest in four years.