Sugar yet to find a sweet spot

Balrampur Chini Mills' December quarter results give a ringside view of what to expect from a sugar company's earnings, especially the north-based ones

Balrampur Chini Mills Ltd’s December quarter results give a ringside view of what to expect from a sugar company’s earnings, especially the north-based ones. The overall picture remains gloomy.

One part of the problem is that falling sugar prices have forced an inventory write-down. On 31 December, the company’s sugar inventory was valued at ₹ 26.75 a kg, down from ₹ 29.75 a kg on 30 September. Sales growth has been affected by falling sugar prices, and Balrampur Chini’s average realization declined by 7.3% over the preceding quarter.

Though Uttar Pradesh government did not reduce the sugar cane procurement price, it has offered some incentives to reduce the company’s actual payout. A portion of these incentives have been booked in the current quarter, and the rest will be booked in subsequent periods. 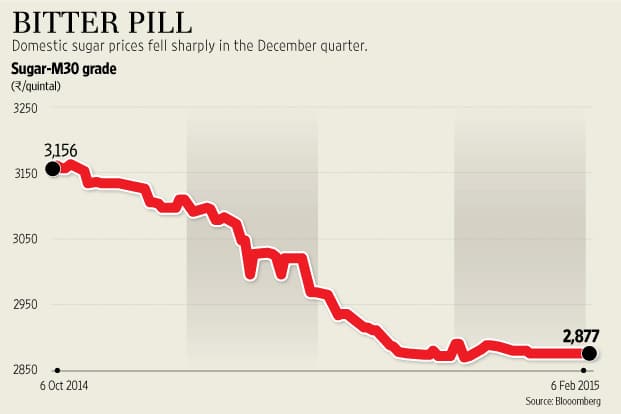 But the losses of the sugar division contributed to a net loss of ₹ 65.7 crore overall, despite total sales rising by 21.9%. Amid this gloomy picture for Balrampur Chini and the industry, there are a few slivers of hope.

Domestic sugar prices have held steady in January. That means December quarter’s inventory losses could be a one-off event, unless prices fall further. Healthy sugar production levels are a risk. But the company management is confident that the industry will get a raw sugar export subsidy of ₹ 4,000 a tonne. This can boost sentiment, as exports can absorb a fair share of this year’s estimated surplus output of nearly two million tonnes.

But the bigger gain could be if higher exports lead to an increase in sugar prices. The chances are slim. Global sugar prices continue to trend weak and since early-January, average raw sugar futures have fallen by 5.5%, on top of a 10.7% decline in the December quarter. That makes it difficult for domestic prices to increase by much. Given that, even if sugar prices don’t fall further, that may be reason enough to celebrate for the trouble-hit sugar industry.