The share swap ratio set for the merger of Dena Bank, Vijaya Bank and Bank of Baroda (BoB) confirm that the rescue mission for the weakest bank will leave everyone a loser

The merger of Dena Bank and Vijaya Bank with Bank of Baroda (BoB) was seen as a rescue mission for Dena Bank. Now, the share swap ratios confirm that the mission will leave everyone a loser. Even Dena Bank’s shareholders have ended up as losers, in contrast to the earlier expectation that they will gain from a favourable share swap ratio.

Recent prices suggest that traders were anticipating a swap ratio of not less than 150 shares of BoB in return for 1,000 Dena Bank shares. The announced ratio of 110:1,000 comes as a huge let down.

Assuming BoB shares stay where they are when trading resumes on Thursday, Dena Bank’s shares need to correct by about 28% to align with reality.

Not that this is a massive relief for BoB. While the dilution in its equity will be lower than anticipated, and may cause a relief rally, the drag from the bank merger is a far bigger worry. It’s little wonder that BoB shares have underperformed the Nifty PSU Bank index by about 12% since the merger was announced in mid-September.

BoB shareholders are getting saddled with the tattered balance sheet of Dena Bank, which has low capital and no ability to lend. Dena Bank has been barred from lending by the regulator for the last seven months. 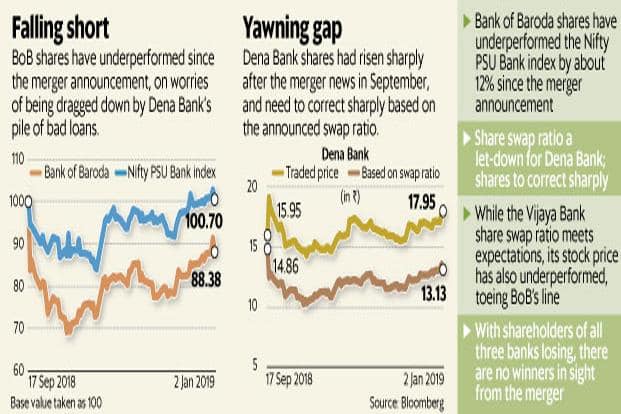 So, essentially, what BoB shareholders are getting is a fistful of deposits and a toxic pile of loans. Dena Bank has a gross bad loan pile of ₹ 16,140 crore, for which the lender has provided for less than 60%. It has a 13,440 strong workforce, for which BoB will have to make good the shortfall in provisions towards gratuity as per rules. This is over and above the requirement to absorb all employees in the bank merger. While merger announcements typically talk of cost synergies, this one points to an increase in costs.

Note that past instances of mergers, including the massive merger of State Bank of India (SBI) with its five associates, show that the months that follow are horrible for the merged entity. SBI had to contend with depressed operating performance as its staff became busy in dealing with new colleagues, new systems and new cultures. Streamlining processes took a toll on the lender and its bad loan ratio surged, while credit growth slowed.

In the case of Vijaya Bank, the share swap ratio is close to what the markets had anticipated. But that is little comfort for its shareholders, as their fortunes have also been tracking the drop in the value of BoB. The fact that this is despite Vijaya Bank’s superior financial performance makes it even more painful for its shareholders.

In its bid to create the third largest lender with a balance sheet size of more than ₹ 14 trillion and a network of 9,489 branches, the government has subjected itself and other shareholders to a painful merger process. The erosion of value has only begun.