OTHERS : Mumbai: Indian shares advanced for a third straight day on Wednesday, led by gains in heavyweight IT stocks Infosys and TCS, which rose over 4%. The benchmark Sensex ended nearly 204 points up and the Nifty 50 settled at 10,729 points. However, the broaders market strength was negative as the mid- and small-cap indices declined. On the 50-share Nifty index, 31 shares declined, while 19 scrips advanced. Yes Bank shares led losses on both indices and closed over 11% lower after Moody’s downgraded the bank’s ratings.In global markets, European stocks edged higher following gains in Asia and U.S. futures pointed to a firmer open ahead of a speech by the chair of the Federal Reserve, and key G20 and Opec meetings. Oil prices rose over 1 ahead of the OPEC meeting next week where the members are expected to decide some form of supply cut to counter an emerging glut. Here are the highlights from the markets: The outlook for Indian stocks for 2019 has been downgraded for the first time this year, according to a Reuters poll of strategists who expect the market to recoup its recent losses only once uncertainty around next year’s elections fade. With state elections slated over coming months and a general election scheduled for May, Indian shares could remain subdued until the results become clear, according to a Nov 13-26 poll of 50 strategists. Read more

Yes Bank shares traded 9.66% down at Rs 165.45 per share. The bank said that it was not involved with the fund management of its promoter firms YES Capital (India) Pvt Ltd and Morgan Credits Pvt Ltd. The bank’s clarification came in response to an Economic Times report on Wednesday, which said that these firms routed debt money as equity into private finance companies.Moody’s Investors Service on Tuesday downgraded Yes Bank’s rating, citing corporate governance concerns and impact of leadership change on the bank’s growth plan. Bitcoin bounced more than 6%, climbing above $4,000 and heading for its biggest daily jump since July as it clawed back ground after recent heavy selling. The world’s biggest cryptocurrency was last as $3,970.04 on the Bitstamp platform, after being mauled in a broad sell-off in cryptocurrencies over the last two weeks. It has lost more than 70% of its value this year. Reuters

Capacite Infraprojects Ltd shares jumped traded 2.21% higher at Rs 233.15 per share after the company said it has received an order worth of Rs 335.38 crore from Bharat Sanchar Nigam Limited (BSNL).

Uday Kotak stake in his bank has investors on edge

Jet Airways shares rose sharply on Wednesday following a report that founder Naresh Goyal has agreed to sell his controlling stake and give up operational control of the struggling carrier. Although Goyal has been reluctant to relinquish his controlling stake in the 25-year-old airline, he is said to have met all three prospective buyers - Tata Group, Etihad Airways and a consortium of Air France - KLM and Delta Air Lines Inc, television news channel CNBC TV18 reported, citing multiple sources familiar with the matter. Investors welcomed the news, sending the airline’s shares up by nearly 9 percent in their biggest intraday percentage gain in nearly two weeks. The stock saw a surge in its volume, falling just short of the 30-day average amount of shares - 15.5 million - in the first half of session. About 14 million shares changed hands in the first half of session, compared with the 30-day average of 15.5 million. Reuters

Oil prices climb more than 1% ahead of Opec meeting

Oil prices rose by more than 1% on Wednesday ahead of an OPEC meeting next week at which the producer club is expected to decide some form of supply cut to counter an emerging glut. The shutdown of Britain’s largest North Sea oilfield for repairs also supported prices, traders said. US WTI crude futures were at $52.24 per barrel, up 68 cents, or 1.3% from their last settlement. International Brent crude oil futures were up 78 cents, or 1.3 percent, at $60.99 per barrel.

Shares of Dr Reddy’s Laboratories traded 0.9% down at Rs 2,566.90 per share. The company said it has launched Chlorthalidone tablets USP, 25 mg and 50 mg, a therapeutic equivalent generic version of Hygroton (chlorthalidone) tablets.

ICICI Prudential Life Insurance, expects private banks and big capital goods companies to drive growth next year, as lenders get on top of their bad loans and oil prices come off their highs. Next year is also set to mark the beginning of a much-awaited earnings recovery in India, even as it gears up for general elections that are due by May, Manish Kumar, Chief Investment Officer at ICICI Pru Life told Reuters. “Our belief is that most of the challenges in the corporate sector banks are in the last stage,” Kumar said, adding he continued to be positive on private banks with exposure to retail clients. Read more

China's economy is showing signs of a slowdown and weakness in demand in the global automotive market is also a red flag for steel demand. https://t.co/0A3jZ9xOiA

Shares of Reliance Capital Ltd gained as much as 3.9% to Rs 243.90. The company on Tuesday reported a profit of Rs 280 crore in the quarter ending Sept. 30, versus a loss of Rs 163 crore in the same period last year. Revenue from operations jumped 10% in the quarter to Rs 5,308 crore.ICICI Securities said the company reported “operationally stable performance with businesses being good”. “Pressure of related group accounts which lead to significantly higher ECL (expected credit loss) provisions impacted net-worth significantly,” ICICI Securities added. Future Retail shares up over 1% on Amazon deal report

Future Retail shares gained as much as 1.47% to Rs 533.65 per share after PTI reported on Tuesday that Amazon is in advanced stage of talks to buy around 9.5% stake in Kishore Biyani-led Future Retail. A final shape to an agreement between the two parties is expected to take place within the next 10 days, although in case of last minute hurdles the deal could be announced as late as January 2019, added the report, citing sources.

Lupin shares fell as much as 2.24% to Rs 830 after the company on Tuesday disclosed that Ramesh Swaminathan resigned as CFO of the company, effective 12 December, to pursue “other responsibilities outside the pharmaceutical industry.”

Yes Bank shares fell as much as 5.05% to Rs 173.90 per share after Moody’s Investors Service on Tuesday downgraded the bank’s ratings to non-investment grade, and changed outlook to negative from stable on the back of various resignations from the board.“Although the bank’s reported credit fundamentals remain stable, the developments surrounding the transition in leadership as well as the governance issues are credit negative because they complicate management’s effective implementation of the bank’s long-term strategy,” said the rating agency.

With HCL Tech and Wipro, Sensex gets its stock selection wrong yet again

Managers of BSE’s Sensex are reversing a portfolio decision they made 15 years ago. Back in November 2003, HCL Technologies Ltd was excluded from the index and replaced by Wipro Ltd. The positions are now being swapped, with Wipro getting the boot, and HCL Tech being welcomed into the index of 30 large-cap stocks. Read more 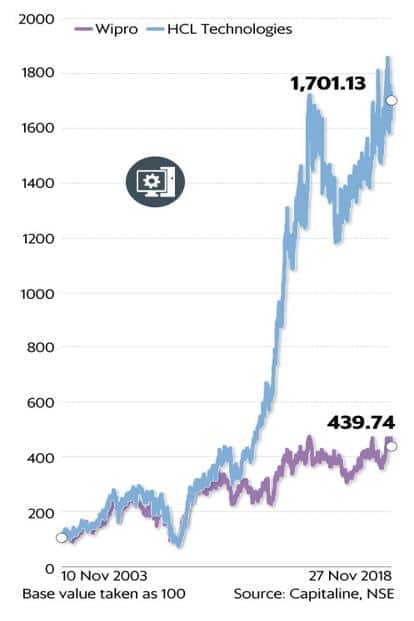 During the 42-day festive period, registrations of vehicles in the domestic market—an indicator of retail sales and consumer sentiment—was down by as much as 11% year-on-year, according to data from analytics firm Crisil Ltd. Passenger vehicles displayed the sharpest decline of 14% in registrations.The BSE Auto index shed 20% between July and end-October before recovering marginally this month. Likewise, shares of Maruti Suzuki India Ltd, which makes one out of every two cars sold in the country, also fell on lacklustre sales.Read: It’s a negative festive surprise for automakers in India Oil prices rose ahead of an OPEC meeting next week at which the producer club is expected to decide some form of supply cut to counter an emerging glut. US WTI crude futures were at $51.88 per barrel at 0148 GMT, up 32 cents, or 0.6% from their last settlement. International Brent crude oil futures were up 44 cents, or 0.7%, at $60.65 per barrel. Despite today’s rise, oil prices have still lost almost a third of their value since early October, weighed down by an emerging supply overhang and by widespread weakness in financial markets.Gold prices steadied after hitting their lowest in nearly two weeks in the previous session, with the U.S. dollar firm as a senior Federal Reserve official reaffirmed the need for further rate increases. Spot gold was steady at $1,214.71 per ounce. Prices fell to their lowest since Nov. 15 at $1,211.36 per ounce on Tuesday. U.S. gold futures were little changed at $1,214 per ounce.Metals: LME copper was little changed on Wednesday after three days of losses but other industrial metals eased amid further uncertainty over the direction of the U.S.-China trade war. Three-month LME copper was unchanged at $6,121.5 a tonne, while the copper contract on the SFE edged down 0.3% to 49,930 yuan ($7,177.67) a tonne. Reuters