Like its peer UltraTech Cement Ltd, ACC Ltd’s volume growth in the last quarter too was subdued, as copious monsoon rainfall across the country dampened sales. After the quarterly results announcement, ACC’s shares ended Friday’s session down 3.1% at Rs1,562.05 apiece on BSE. Muted volume growth had been anticipated, so what led to the Street’s sharp negative reaction? The answer: There were disappointments on other key parameters too.

Cement sales volume for the quarter fell 9.6% year-on-year to 5.07 million tonnes, touching its lowest level since the December 2014 quarter. Weak volume growth led to a decline in consolidated revenue, which stood at Rs2,521 crore in the quarter. 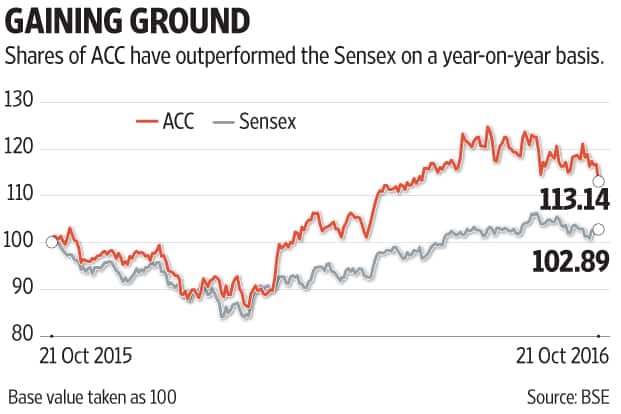 On the supply side, ACC expects volume to pick up as its newly commissioned units stabilize, especially in the fast growing eastern region. But some analysts point out that if a further delay in demand revival prompts the company to operate the Jamul clinker unit in Chhattisgarh—commissioned in July—at lower utilization levels, that could impact its cost per tonne. Hardening of petroleum coke prices and increase in railway freight cost are other risks.

On the overall demand side, ACC maintained an optimistic outlook for the economy in the coming months.

Reliance Securities Ltd followed suit. “We cut our earnings estimates by 14% & 11% for FY16E & FY17E, respectively largely to factor in reported dismal volume and visible spike in fuel costs. We reiterate our buy recommendation on the stock with a revised target price of ₹ 1,780," it said in a report.

Some more brokerage firms are expected to lower the company’s earnings estimates after the results.

On the valuations front, ACC is trading at one-year forward price-to-earnings multiple of around 32 times, lower than UltraTech’s 34 times. Striking a note of caution, analysts say the pressure on ACC’s stock is likely to continue and the movement in share price would largely depend on how soon volumes pick up and the extent to which realizations improve.