With a historic commitment to finance the lower-income segment that stretches back decades, India has taken steps during the past 10 years to modernise its financial system, particularly leveraging technology to bring more of the population in

For the first time in 7 years, Peru does not occupy the top spot alone: it has been joined by Colombia, last year’s number two country. While these two leaders continue to perform highly, and in Colombia’s case to strengthen certain areas, the more substantial shift and interesting story is about India.

India is now firmly among the leaders, having tied with the Philippines for third position overall. India is the leader among several countries that have jumped forward substantially this year due to deliberate efforts to upgrade their financial inclusion systems.

In the four leading countries, financial inclusion has been on the policy agenda for many years. The central banks of Peru and the Philippines were among the 17 original participants in the Maya Declaration in 2011. The Reserve Bank of India (RBI), meanwhile, has not signed the declaration, but there is no doubting its commitment. With a historic commitment to finance the lower-income segment that stretches back decades, India has taken steps during the past 10 years to modernise its financial system, particularly leveraging technology to bring more of the population in.

India has shown dramatic improvement in the Global Microscope between 2014 and 2016. India’s financial inclusion policy, Pradhan Mantri Jan-Dhan Yojana, has the political will and institutional support of the government and the RBI. This is demonstrated with quantifiable goals, such as the opening of 100 million bank accounts for low-income families in 2014 and assisted by the Aadhaar national biometric identification programme. The momentum in account opening continued over the next 2 years, reaching 221 million by April 2016. The plan also emphasises access to credit, insurance and pension facilities, as well as the goal of channelling all government benefits into beneficiaries’ bank accounts to increase usage. The RBI has targets in place to provide alternative sources of access through bank branches, bank correspondents, ATMs and satellite branches in villages of 2,000 or more residents. It has also issued guidelines to strengthen financial literacy. In addition, the RBI is working to strengthen the payment system with the launch of the Unified Payment Interface (UPI) to facilitate digital money transfers.

The greater attention to digital technologies for financial inclusion holds promise. In the 2014-15 period, countries’ scores in this area rose by a remarkable 11 points on average, indicating widespread, positive action to create a regulatory environment more conducive to digital economic activity. Apart from improvements year to year, several of the countries in the study continue to receive the highest score of 100 out of 100 in the overall indicator of e-payments. These are: Bolivia, Ghana, India, Kenya, Sri Lanka and Tanzania, with India being the addition this year. 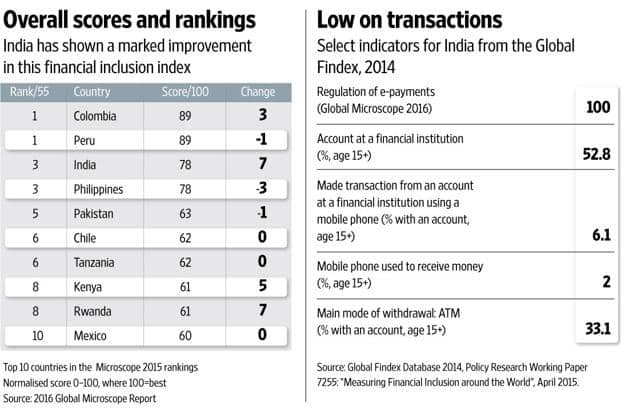 In India, both central and state government transfers to low-income populations are increasingly delivered through bank accounts. By April 2016, around $900 million were being transferred to 300 million people every month under 56 government schemes.

With more and more “inclusive" bank accounts being opened, attention must now shift to the use of those accounts. In too many places, inclusion still entails no more than the withdrawal of transfer payments from accounts that are otherwise dormant. The monitoring of information on transactions in such accounts is the first step to understanding what measures need to be taken to facilitate the use of those accounts.

The RBI has been monitoring transactions in e-enabled inclusive accounts over the past 6 years.

The average number of annual transactions in such accounts has remained between 2.5 and 3.0 over the past 5 years; and the number of e-enabled inclusive accounts has increased from 30 million to more than 220 million during this period.

Ongoing concern about account dormancy has led to the liberalisation of agent banking rules in India in order to facilitate account use.

The Microscope was originally developed for countries in the Latin American and Caribbean regions in 2007 and was expanded into a global study in 2009. This work was supported by funding from the Multilateral Investment Fund (MIF); the Center for Financial Inclusion at Accion, and the MetLife Foundation.