OTHERS : Mumbai: Benchmark indices BSE Sensex and NSE’s Nifty 50 continued their winning streak for the sixth session on Monday helped by metal and realty stocks. Positive cues from global markets after US-China trade truce also boosted Indian shares. Sun Pharma shares dived 7.5% after news reports that Sebi is going to reopen insider probe in the company. Also, muted sentiment in auto stocks due to lower-than-expected festive sales added pressure. Hindustan Unilever shares jumped 4% after the company announced merger with GSK’s healthcare business in India. Asian shares rallied on Monday after U.S. and Chinese leaders brokered a truce in their trade conflict. Oil prices surged around 4% after Washington and Beijing agreed a 90-day trade truce and ahead of the Opec meeting this week that is expected to result in a supply cut. India’s GDP grew a lower-than-expected 7.1% in the quarter on an annualised basis, from a more than two-year high of 8.2% in the previous quarter. Here are the highlights from the markets: India’s current account deficit (CAD) is likely to rise to 3% of the gross domestic product (GDP) in the July-September quarter (Q2) of 2018-19, from 2.4% in the preceding quarter, driven mainly by high crude oil prices, ICRA said Monday. ICRA expects the current account deficit to widen sharply to $19-21 billion, or 3% of GDP, in Q2 FY19, from $7 billion in Q2 FY18, led by higher crude prices and gold imports, the credit ratings agency said in a statement. Read more

Yes Bank shares jumped as much as 5.7% to Rs 179.10 per share after the bank said it has appointed T. S. Vijayan as an independent director.

Hindustan Unilever on Monday said that it will merge with GSK’s healthcare business. The transaction values the total business at ₹31,700 crore. The merger includes the totality of operations within GSK Consumer Healthcare India, including a consignment selling contract to distribute GSK Consumer’s over-the-counter and oral health products in India, the company said in a statement. HUL shares traded 1.90% up at Rs 1787 per share.

Europe’s major stock markets surged at the start of trading on Monday after China and the United States clinched a trade war truce. In initial deals, London’s FTSE 100 index jumped 1.5 percent to 7,087.36 points. In the eurozone, Frankfurt’s DAX 30 soared almost 2.5 percent to 11,534.75 points and the Paris CAC 40 rose 2.2 percent to 5,112.58. US President Donald Trump and his Chinese counterpart Xi Jinping agreed in a meeting at the G20 on Saturday to suspend any new tariffs in the trade war between the world’s two largest economies pending talks to resolve their differences. AFP

Shares of Reliance Communications extended gains and rose as much as 17.7% to Rs 16.80 per share today. The Supreme Court on Friday cleared the sale of spectrum by Anil Ambani-controlled Reliance Communications Ltd to elder brother Mukesh Ambani’s Reliance Jio Infocomm Ltd (RJio) on the condition that the seller furnishes ₹1,400 crore as corporate guarantee to the government within two days.

Goldman Sachs said it had cut its forecast of India’s GDP growth to 7.3% and 7.6% respectively in FY19 and FY 20 respectively from 7.7% and 7.9% respectively. The investment house said the markdown reflects two reasons: the assumed positive effects of state-run banks’ recapitalisation has not materialised so far. Secondly, while the after effects of demonetisation have faded, the implementation of GST is running into short-term bottlenecks.

Mahindra and Mahindra Ltd said Mahindra First Choice Services has entered into an asset acquisition agreement with the official liquidator of Carnation Auto (India) Pvt. Ltd to acquire key assets of Carnation’s car-servicing business. The assets include the trademark ‘Carnation’, its website, software licenses and Carnation’s workshop network. M&M shares traded 3.32% down at Rs 764 per share.

HEG shares have surged about 28 times since the beginning of 2017https://t.co/hC7cHHfX48 Shares of Sandhar Technologies Ltd traded 4.6% up at Rs 324.55 per share after the company said that has signed a joint venture agreement with South Korea’s Kwangsung Corp. Ltd for manufacturing plastic moulded parts and accessories for the passenger and utility vehicles segment.

Shares of oil marketing companies (OMCs), Hindustan Petroleum, Indian Oil and Bharat Petroleum, declined as oil prices surged nearly 4% today after the United States and China agreed a truce in their trade conflict and ahead of a meeting by producer club OPEC this week that is expected to result in a supply cut. HPCL shares were down over 2%, BPCL shares fell 0.5% and IOCL shares traded lower by around 1%. 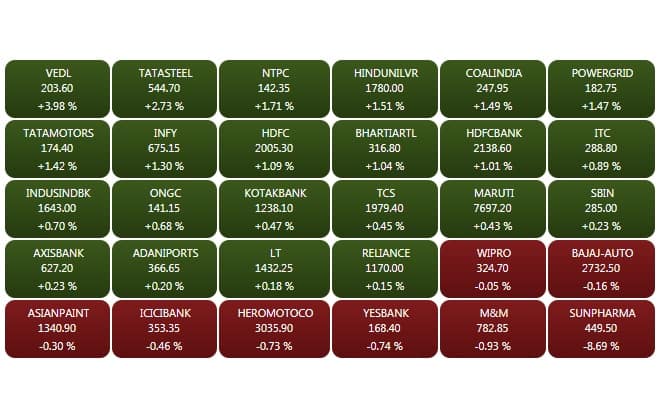 Shares of metal companies as prices of industrial metals in London and Shanghai jumped after US and Chinese leaders agreed to a ceasefire in a trade dispute that has shaken global markets. The Nifty Metal Index rose 3%, led by Jindal Steel, Hindalco, Vedanta and Tata Steel.Three-month LME copper rose 2.3% to $6,338.5 a tonne, while the most-traded copper contract in Shanghai climbed 1.7% to 50,420 yuan ($7,248.63) a tonne. Other industrial metals also rose, with Shanghai zinc jumping 4.7% to 21,370 yuan a tonne. (Reuters) Sun Pharma shares fell as much as 10% to Rs 443.10 per share after PTI reported on Friday that Sebi is likely to reopen an insider trading case against Sun Pharmaceutical Industries as well as probe alleged lapses by some of its promoters and other entities in raising funds overseas.The development comes after a whistleblower reportedly approached Sebi with a document alleging various irregularities by the company, its promoter Dilip Shanghvi and others, the report added, citing source. In August 2017, Sun Pharmaceutical, its managing director Dilip Shanghvi and nine other entities settled an insider trading probe on payment of Rs 18 lakh towards settlement charges.

Rupee trades lower against US dollar

There are enough reasons for RBI to deliver a status quo policy at its monetary policy committee meeting. https://t.co/ezEgyiN2og

Oil prices shot higher after the United States and China agreed a 90-day truce in their trade conflict and ahead of a meeting by producer club OPEC this week that is expected to result in a supply cut. U.S. West Texas Intermediate (WTI) crude futures were at $53.38 per barrel at 0220 GMT, up $2.45 per barrel, or 4.8% from their last close. International Brent crude oil futures were up $2.38 per barrel, or 4%, at $61.84 a barrel.Gold prices were steady early as the dollar weakened on U.S.-China trade truce that revived investor demand for riskier assets. Spot gold inched up 0.1% to $1,222.97 per ounce at 0109 GMT. U.S. gold futures were up 0.2% at $1,228.1 per ounce. Physical gold demand in India got a fillip this week from a slide in local rates due to gains in the rupee, while buying was steady in other top Asian hubs.London and Shanghai industrial metals jumped after U.S. and Chinese leaders agreed to a ceasefire in a trade dispute that has shaken global markets. Three-month LME copper rose 2.3% to $6,338.5 a tonne, while the most-traded copper contract in Shanghai climbed 1.7% to 50,420 yuan ($7,248.63) a tonne. Other industrial metals also rose, with Shanghai zinc jumping 4.7% to 21,370 yuan a tonne. Reuters

Risk appetite returned to markets, as U.S. equity futures climbed alongside Asian stocks, the Australian dollar and the Chinese yuan, after a truce between Washington and Beijing emerged from the Group-of-20 summit. Oil surged on signs a supply glut may ease. S&P 500 Index futures jumped over 1.5 percent, while the Aussie and the currencies of South Africa, Turkey and Mexico all rose. Shares from Sydney to Shanghai gained and the 10-year Treasury yield jumped back above 3 percent.Futures on the S&P 500 jumped 1.6 percent as of 10:38 a.m. in Hong Kong. The S&P 500 closed up 0.8 percent on Friday. Japan’s Topix index advanced 1.5 percent. Hong Kong’s Hang Seng rallied 2.7 percent. South Korea’s Kospi climbed 1.8 percent. Futures on the U.K.’s FTSE 100 Index gained 1.8 percent. Bloomberg