Reliance Jio’s growth, as compared to rivals Airtel and Vodafone Idea, should please RIL shareholders, but elevated costs indicate Reliance Jio is yet to impress on profitability and net earnings

If the strong subscriber addition continues at Reliance Jio Infocomm Ltd, it may soon emerge as the leading wireless telecom company in India. Reliance Jio’s net revenue may have crossed Bharti Airtel Ltd’s wireless revenue in India last quarter, according to analysts at Kotak Institutional Equities Research. If the Reliance Industries Ltd (RIL) unit maintains the momentum, then it may emerge as the largest telecom company as early as the end of 2018. 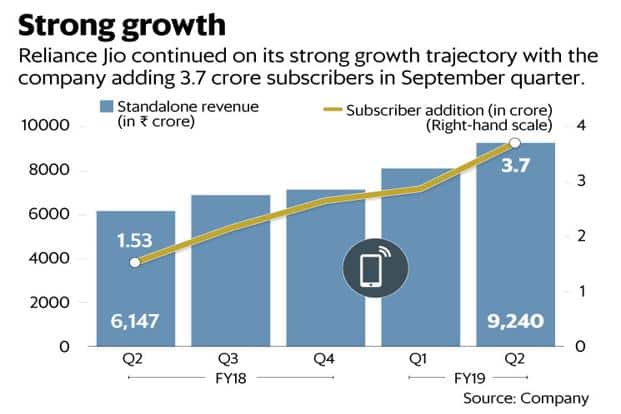 Reliance Jio’s focus remains on expanding its subscriber base but the ban on Aadhaar-based e-KYC can affect this. This, however, is seen as a temporary phenomenon. The trends indicate continued tough times for incumbent telecom companies which have to step-up capital expenditure (capex) while dealing with price erosion.

“We expect competitive intensity to remain elevated over the next 9-12 months as fight for subscriber share continues. Reliance Jio, over the weekend, introduced 100% cashback for all packages and various players have been tweaking with pricing and packs," Jefferies India Pvt. Ltd said in a 19 October note. Further, the incumbents, given their weakened financial position, are lagging in capex, which is crucial for product offerings and customer retention.

“Reliance Jio continues to be on an accelerated capex drive, spending around ₹ 330 billion in H1FY19 (Q2 spend ₹ 160 billion) which is ~70% its own FY18 capex and is largely equivalent to the combined capex spend of the remaining two incumbents (Bharti Airtel, Vodafone Idea) put together in FY18," SBICAP Securities Ltd said in a note. “The scale of investments and the current profitability differential suggest that Reliance Jio is unlikely to relent till it achieves a meaningful market leadership in terms of revenue market share."

Reliance Jio’s progress should please its shareholders. But elevated costs indicate that the operator is yet to impress on profitability and net earnings. This may take some time as Reliance Jio sees no imminent need for price rationalization.