Currency sinks beyond 80 per dollar, rebounds to 68 after Russian economy minister denies the government would turn to capital controls

Moscow: The rouble plummeted into a freefall, losing as much as 19% as panic swept across Russian financial markets after a surprise interest-rate increase failed to stem the run on the currency.

The rouble sank beyond 80 per dollar, a record low, before rebounding to 68 after economy minister Alexei Ulyukayev denied speculation that the government would turn to currency restrictions next to stop Russians from converting their money into dollars. Bonds and stocks also tumbled, with the RTS equity gauge dropping the most in six years.

“I am speechless," Jean-David Haddad, an emerging-market strategist at OTCex Group in Paris, said in a message. “What a failure for the central bank. Russia would need to announce capital controls today. That is the last solution."

The scope and speed of the rouble’s retreat indicates policymakers are losing control of the situation as the six-month, 49% tumble in oil robs President Vladimir Putin of the hard currency he needs to sustain an economy that’s faltering under the weight of international sanctions. Government officials huddled on Tuesday night to discuss the crisis, a day after the central bank’s 6.5 percentage-point rate increase could only stoke a brief rally in the rouble this morning before it started falling. 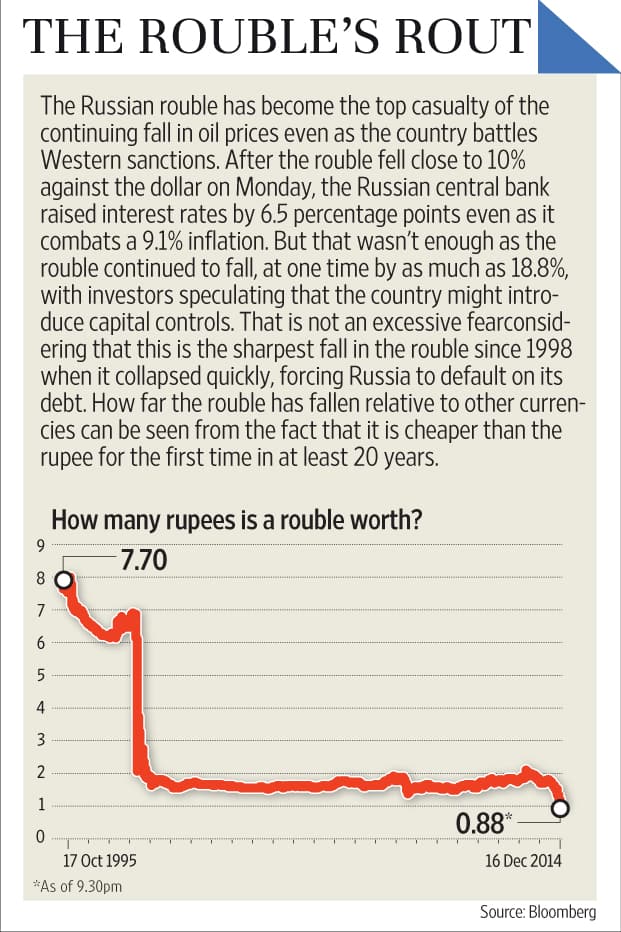 Firms from Schroder Investment Management Ltd to Skandinaviska Enskilda Banken AB said that officials may announce restrictions on currency transactions, a step that Ulyukayev said after the meeting the country isn’t considering. Per Hammarlund, chief emerging-markets strategist at SEB, said the government could make it harder for depositors to swap cash into hard currency or require exporters to bring some earnings into the country.

While there were no initial signs on Tuesday of Russians lining up in downtown Moscow to pull their rouble deposits and buy dollars, Khanty-Mansiysk Otkritie Bank, the retail arm of the country’s second largest private lender, said demand for foreign currencies was three to four times the daily average.

Even after rebounding late in Moscow, the rouble was still down 7% on the day. It earlier fell the most in a day since the country defaulted and devalued the currency in 1998.

Ten-year rouble bond yields jumped 3.05 percentage points to 16.28% while the annual cost of insuring against a debt default climbed to 5.55% in the credit-default swaps market, the highest since 2009.

“Our traders are informing me that we see no bids to buy roubles," SEB’s Hammarlund said. “I thought 17% would give them at least a month of breathing space. We next have to look at the experience in 1998-1999. We are also one big step closer to capital controls."

The currency’s plunge was exacerbated by concern that policy makers were pumping more roubles into the economy to prop up state companies like oil giant OAO Rosneft, measures that effectively give investors additional money to purchase dollars.

OAO Rosneft’s chief executive officer Igor Sechin said suggestions the company’s bond sale contributed to the rouble’s decline were a “provocation" and reiterated that it has no plans to convert the 625 billion roubles it borrowed last week into dollars.

But central bankers are pushing roubles into the financial system to prevent credit from seizing up and deepening the slowdown in an economy that’s already sinking into recession nine months after Putin invaded Ukraine’s Crimea peninsula. The central bank alotted 3.1 trillion roubles in seven-day loans, known as repos, at an auction on Tuesday, the second biggest such operation since May.

The rouble has plummeted more than 50% this year even after 11.5 percentage points of increases took the key interest rate to 17% and the central bank spent more than $80 billion on interventions.

The costs of the depreciation in rouble are steep as inflation hovers at a more than three-year high and currency interventions drain the nation’s foreign reserves. Russia’s cash pile has fallen to a five-year low of $416 billion. The boost in Russian borrowing costs, which happened in a surprise announcement just before 1am in Moscow, was the biggest since rates soared past 100% in 1998.

“If such a rate hike, such a shot of medicine doesn’t help the rouble, then interventions won’t help either," Artem Roschin, a foreign-exchange dealer at Aljba Alliance in Moscow, said by phone. “There’s no point in spending reserves."

While the strain on reserves led the central bank to push forward plans last month for a freely floating rouble, policy makers spent more than $6 billion on interventions since Opec unleashed a sell-off in oil after its 27 November decision to keep output unchanged.

Three-month implied volatility, a gauge of expected swings in the currency, surged 11 percentage points to 56% on Tuesday, the highest level since 2005, according to data compiled by Bloomberg. Bloomberg

Matthew Oakley and Lilian Karunungan in Singapore, Elena Popina in New York and Lyubov Pronina in London contributed to this story.