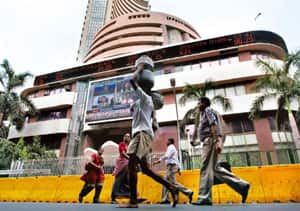 Economic uncertainty: The Bombay Stock Exchange building in Mumbai. Growth rates are coming under threat globally due to the European debt crisis and this has triggered an erosion of investor confidence. Rupak De Chowdhuri/Reuters

Sterlite declined 1.6% to Rs641.65. The stock has slid 22% since the end of April and is poised for its worst monthly performance since October 2008. Commodities, measured by the Reuters/Jefferies CRB index of 19 raw materials, slumped to an eight-month low on Thursday.

The rupee fell past 47 per dollar for the first time this year, set for the worst week since 1995.

Economic growth rates are coming under threat globally due to the European debt crisis and this has triggered an erosion of investor confidence, said R.V.S. Sridhar, senior vice-president at Axis Bank Ltd in Mumbai.

Overseas investors sold a net Rs1,470 crore of Indian equities on Thursday, reducing their total purchases of the stocks this year to Rs24,590 crore, according to the nation’s market regulator.

Inflows from overseas reached a record Rs83,420 crore in 2009, exceeding the high set two years earlier in domestic currency terms, as the biggest rally in 18 years lured foreign funds. They sold a record Rs52,990 crore of shares in 2008, triggering a record annual decline.

Anil Varma contributed to this story.