With the recent incremental macro data pointing to a deceleration in economy, it won't be startling if December quarter GDP numbers show some moderation in growth

When London-based Nevsky Capital decided to shut down its $1.5 billion hedge fund earlier this month, it said one reason for the decision to stop managing the fund, after just over 15 years, was the deteriorating quality of data, especially the numbers coming from China and India. “Currently stated Chinese real GDP growth is 7.1% and India’s is 7.4%. Both are substantially over stated. This obfuscation and distortion of data, whether deliberate or inadvertent, makes it increasingly difficult to forecast macro and, hence, micro as well, for an ever growing share of our investment universe," said the Fund, in a newsletter to clients (courtesy www.zerohedge.com—read here: bit.ly/1U49SmW).

Well, that is hardly surprising. After all, it only goes to affirm the worries many people have had on India’s growth numbers since the new series of gross domestic product (GDP) numbers started being published. In that backdrop, Ambit Capital Pvt. Ltd’s Keqiang index, launched last September, could well offer some meaningful insight about India’s growth numbers.

Ambit’s India Keqiang Index comprises ‘real’ economic indicators such as auto sales, cargo volume, capital goods imports and power demand. It has excluded rail cargo and port traffic because of aberrations due to an increase in freight traffic on roads following a slump in diesel prices and lower traffic at ports because of subdued global demand.

According to the brokerage, if the new GDP series did not exist, using the Keqiang (pronounced ‘kuh cheeang’) index to estimate the pace of growth in the real economy, Ambit’s GDP estimate for the September quarter would be 6% year-on-year (versus the 7.4% printed by the new GDP series). Chart 1 alongside shows the performance for the last four quarters.

In fact, growth in India’s Keqiang index, which is similar to China’s Li Keqiang index, has consistently declined in the past year, with the September quarter growth dropping to 2.5% from 14.4% a year ago, clearly indicating that the economy has lost momentum every quarter. The index has 81% positive correlation with the old GDP series and a weaker 35% positive correlation with the new GDP series, as Chart 2 shows. 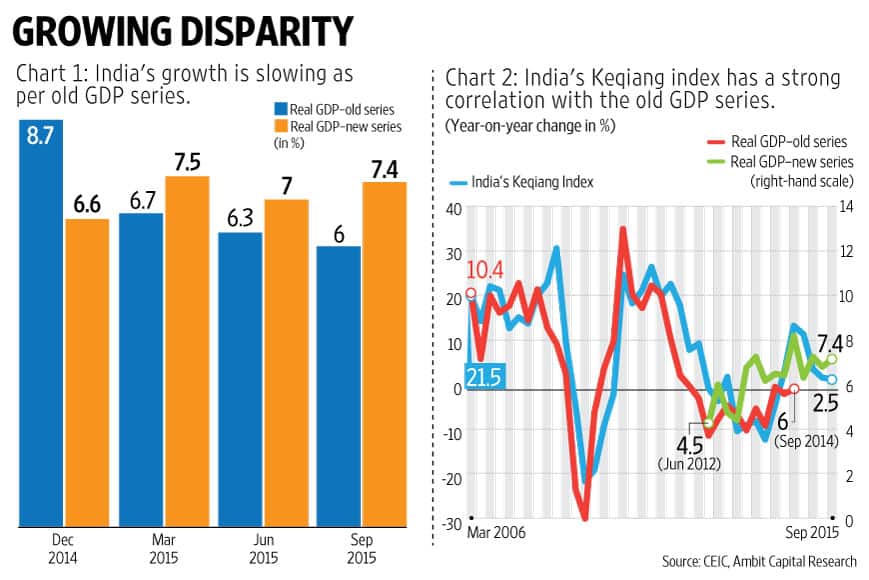 The fact of the matter is that with the recent incremental macro data pointing to a deceleration in the economy, it won’t be startling if the December quarter GDP numbers show some moderation in growth.

For one, the expectations from the December quarter corporate financial results are not very exciting.

As Bank of America Merrill Lynch points out in its preview report, “Despite the favourable low base of the previous year, earnings growth expectations for 3QFY16 remain muted. Based on analyst forecasts: a) Sensex (consolidated) profits are likely to grow 7.1% YoY (vs 5% YoY in 2Q); b) Aggregate Sensex sales are expected to contract (albeit at a slower pace) for the fifth consecutive quarter at -1.7% YoY; c) Margin benefits of lower commodity prices for consumers have largely been accrued, as ex-commodity company margins are expected to decline during the quarter."

Further, the industrial sector is in the midst of a stark slowdown. Industrial output growth has averaged at 3.3% year-on-year in October-November, compared with an average of 4% in April-September. The composite purchase manager’s index (PMI) for India for October-December has averaged 51.5 against an average 52.03 in July-September. The composite output PMI combines manufacturing and services activity in the private sector in India.

Devika Mehndiratta, senior economist, Asia-Pacific, Australia and New Zealand Banking Group Ltd (ANZ), says that manufacturing purchase manager’s activity is very close to the 2013 bottom, while services activity did show some encouragement in December. However, the sustainability of services growth independent of strong manufacturing recovery remains uncertain, according to Mehndiratta.

Saurabh Mukherjea, head of institutional equities, Ambit, says the country is in a prolonged economic slowdown, like the one seen in 1991, and it will take around four to five quarters for the economy to rebound.

Will the upcoming budget be able to stimulate growth?

Even if the government relaxes the fiscal deficit target for 2016 from 3.5% of GDP to, say, 3.8%, as projected by ANZ Research, meaningful spending on infrastructure may not be feasible from the budget alone. There’s misplaced enthusiasm that budget-funded infrastructure spending will be able to bring about a strong upturn in investments—incremental spending at 0.3% or so of GDP might not be a large enough stimulus.

Therefore, what will perhaps be more important in 2016 for near-term growth prospects is how successfully the government is able to attract foreign funds into the envisaged $6 billion National Investment and Infrastructure Fund—and how quickly it revamps the public-private partnership model. Speedy implementation of a new and effective bankruptcy code, among other steps by the Reserve Bank of India, will be equally important for an investment recovery, says Mehndiratta.