OTHERS : Mumbai: Indian benchmark indices rose for the sixth straight session on Tuesday led by gains in power and energy stocks such as NTPC and Power Grid. Shares of oil marketing companies rose as crude oil price declined over 2%. Metal and select private bank stocks also supported the benchmark indices. However, a selloff in global markets ahead of the US Federal Reserve monetary policy decision limited gains. The BSE Sensex closed 77.01 points, or 0.21%, up at 36,347.08, and the Nifty 50 ended 20.35 points, or 0.19%, higher at 10,908.70.The BSE mid- and small-cap indices rose 0.21% and 0.45%, respectively. Among the sectoral indices on BSE, capital goods and power gained most at over 1%. Telecom, utilities, metal and bankex also advanced. IT and teck fell over 1%. FMCG and consumer durables also fell.Sun Pharma, Power Grid, Vedanta, M&M, JSW Steel and Asian Paints were among the top gainers on the key indices, whereas Infosys, Wipro, Yes Bank, ITC and Hindustan Unilever were top losers.The rupee strengthened past the 71-mark to hit a near two-week high, tracking gains in Asian peers as concerns over global economic growth weighed on the dollar.In global markets, stock markets in Europe and Asia sank as heightened worries about a slowing global economy sent US stocks falling to their lowest levels in more than a year. Oil prices fell over 2% as reports of swelling inventories and forecasts of record US and Russian output. Here are the latest updates from the markets:

Saudi Arabia and Reliance Industries Ltd are discussing joint investment in petrochemicals and oil refinery projects, Saudi oil minister Khalid al-Falih said. Al-Falih, who has known Ambani for over a decade now, travelled to Udaipur earlier this month to attend the pre-wedding festivities of Ambani’s daughter Isha Ambani’s marriage with Ajay Piramal’s son Anand Piramal. During that visit, he also held talks with Ambani but choose to tweet about those discussions only this week. Bloomberg

Carlyle Group LP is seeking to double its holding in PNB Housing Finance Ltd, reported Bloomberg, citing people familiar with the matter, reversing an earlier attempt to pare its stake in the company. The US private-equity firm is considering buying Punjab National Bank’s shares in PNB Housing. Punjab National Bank’s 32.8% stake was valued at about Rs 5,300 crore as of close of trade on Monday. PNB Housing Finance shares traded 2.41% down at Rs 947.45 per share. Read more

CERC has continuation of the 15.5% regulated return on equity (RoE) for power companies despite a reduction in benchmark interest rate since 2014. https://t.co/5IPhNnc79y

The Indian rupee on Tuesday strengthened past the 71-mark to hit a near two-week high, tracking gains in Asian peers as oil prices fell and concerns over global economic growth weighed on the dollar. At 2.10pm, the rupee was trading at 70.86 a dollar, up 0.98% from its Monday’s close of 71.55. The currency opened at 71.33 and touched a high of 70.85 a dollar. The 10-year government bond yield stood at 7.417% from its previous close of 7.461%. Read more

The chief of Securities and Exchange Board of India (Sebi) on Tuesday expressed concerns about the slow pace of initial public offerings (IPOs) hitting the market despite approval for filings worth around ₹60,000 crore ($8.43 billion). However, Sebi chairman Ajay Tyagi cautioned that pricing of IPOs should be done more carefully in volatile times.Fundraising by small-and-medium-sized companies have doubled as against last year, Tyagi said / addressing an investment banking event in the city.Driven primarily by domestic investors, the broader NSE Nifty has gained 3.4 %, while the benchmark BSE Sensex is up 6.5% so far this year.However, a debt crisis at Infrastructure Leasing and Financial Services (IL&FS) in September and tightened liquidity due to global trade tensions have dampened investor sentiments, making it difficult for companies to come out with IPOs. Reuters

Skipper gets orders worth Rs 150 crore

Skipper Ltd said it has received new orders worth Rs 150 crore for 2500 telecom towers from various telecom operators. Shares traded 2.06% lower at Rs 88 per share, after hitting day’s high of 90.45.

What a Brookfield-Leela deal means for the hotels sector

Apart from debt relief for Leela Hotels, Brookfield's entry will raise the profile of the hospitality sector, and may well be the harbinger of more investments in the domain. https://t.co/0R9qy6CGq0 Oil prices down over 1% amid supply glut worries

Brent crude prices dropped more than $1 on Tuesday, falling for a third straight session, as reports of inventory builds and forecasts of record shale output in the United States, now the world’s biggest producer, stoked worries about oversupply. International benchmark Brent crude oil futures were at $58.62 per barrel, down 99 cents, or 1.66 percent, from their last close. U.S. West Texas Intermediate (WTI) crude futures were down 91 cents or 1.82 percent at $48.97 per barrel. Read more

Edelweiss Securities maintained “Buy” rating and “Attractive” outlook of the Ashoka Buildcon stock, saying that the tie up with Morgan Stanley India Infrastructure is a major positive for the company, “allowing it to scale up the CGD business while reducing the strain on balance sheet.”“The partnership is likely to be sufficient not only to fund its existing projects, but also to grow its portfolio by winning new projects,” added the brokerage. It gave an SOTP‐based TP of Rs 201.

Jet Airways shares down over 2%

Jet Airways shares traded 2.185 lower at Rs 244.65 per share. The company on Monday confirmed that, as per directions of State Bank of India, the forensic audit of specific transactions of the company for the period of April 2014 to March 2018 was already in progress and the aviation company is co-operating fully with auditors and providing them all the information.

Shares of IL&FS Engineering and Construction Co., IL&FS Transportation Networks Ltd and IL&FS Investment Managers Ltd rose between 4.8% and 9.3%. IL&FS group said on Monday that it has initiated steps for monetisation of its domestic roads vertical. The company said in press release that these steps are required to “advance the process of putting together a resolution plan for the IL&FS group, based on market interest and price discovery of various assets”

Shares of Bombay Dyeing and Manufacturing Co. rose as much as 4.97% to Rs 115.10 per share after the company on Monday disclosed that its board has approved closure of PT Five Star Textile Indonesia as the unit was incurring losses for many years. 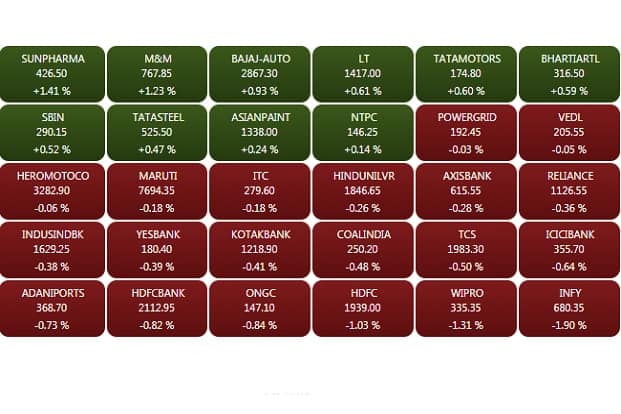 Ashoka Buildcon shares jumped as much as 8.25% to Rs 137.70 per share after the company said its unit raised Rs 150 crore from Morgan Stanley India Infrastructure for city gas distribution.

Graphite India Ltd advanced as much as 3.3% to Rs 877.70 per share after Karnataka State Pollution Control Board renewed the consent to operate for Graphite India’selectrode plant in Bengaluru for a period up to June 30, 2020 only with the condition to shift the unit from the existing location. The company said that this condition will not have adverse impact on the production capacity of the graphite electrode division in the medium term and long-term horizon.

Tata Motors shares rose as much as 2.2% to Rs 177.60 per share after Bloomberg reported that Jaguar Land Rover hired Boston Consulting Group for $3.2 billion turnaround plan, the spokesperson of JLR worker’s representative body Unite Union said. He added that the workers had not been informed of any job reductions in January next year and do not expect any, as they have to be given at least 45 days of notice.

The Indian Rupee edged higher on Tuesday as the US dollar weakened ahead of the US Federal Reserve monetary policy decision on 19 December. At 9.08am, the rupee was trading at 71.34 a dollar, up 0.30% from its Monday’s close of 71.55. The currency opened at 71.33 a dollar. The 10-year government bond yield stood at 7.426% from its previous close of 7.461%. So far this year, the rupee has declined 10.74%, while foreign investors have sold $4.44 billion and $7.34 billion in the equity and debt markets, respectively. Read more

On Monday, foreign institutional investors (FIIs) sold equities worth Rs 60.95 crore on net basis, while the domestic investors (DIIs) unloaded shares to the tune of Rs 76.84 crore, according to provisional data available on NSE website.

Shares of mid-cap IT companies have fallen between 20% and 35% from their highs this year, making it a tad easier to find buyers.

Private equity investors have been selling part of their stakes in mid-cap IT companies this year. https://t.co/AbY4P1Fyn4

Oil prices dropped 1%, extending losses from the previous session as reports of a big climb in U.S. inventories and forecasts of record shale output stoked worries about oversupply. Concerns around future oil demand amid weakening global economic growth and doubts over the impact of planned OPEC-led production cuts were also pressuring prices, traders said. International Brent crude oil futures were at $58.95 per barrel, down 66 cents, or 1.11%, from their last close. US WTI crude futures were down 40 cents, or 0.8%, at $49.48 per barrel.Gold prices were largely steady ahead of a U.S. Federal Reserve meeting that starts later in the day, with investors looking for clues on the central bank’s outlook for next year. Spot gold was little changed at $1,245.40 per ounce. U.S. gold futures were down 0.2% at $1,249.6 per ounce.Metals: London copper traded sideways, as concerns that global trade ructions would cool China’s economic growth were offset by a drop in stocks held on exchange. LME copper steadied, having edged up by 0.2% to $6,132.50 a tonne. Shanghai copper was little changed at $7,123 a tonne. Reuters

Asia stocks mixed after US slide to 14-month low