Home / Opinion / How much do valuations really matter?
Back
Share Via

How much do valuations really matter?

Usually stock market cycles swing to extremes, rarely, if ever, being priced at a fair value

During 1963-73, growth stocks in the US that were part of the S&P 500 were popularly termed “Nifty 50", and were favourites of retail investors and portfolio managers. They were also called “one-decision" stocks, i.e, the one stock that you would need to buy for the rest of your life. Most were large-cap names. But interestingly, there was no official list of “Nifty 50". As the stock market started to reel under the pressure of the oil crisis, these stocks defied the fall, and given the support of institutional managers, a two-tiered market was formed. The “Nifty 50" held to their valuations, while the rest of the market tanked. At the end of 1972, three leaders—Xerox, Avon and Polaroid—traded at a price-earnings (P-E) ratio of 49, 65 and 91, respectively. So, while the “Nifty 50" stocks continued to trade at high multiples, the rest of the S&P 500 reflected the dismal growth prospects. Then, one by one, they fell—Xerox by 71%, Polaroid 91%, and Avon 86% at their 1974 lows from the peak in 1972 (Nifty-Fifty Re-Revisited, Jeff Fesenmaier and Gary Smith). This highlighted the danger that investors face when they have unrealistic expectations of earnings growth while buying high-multiple companies.

In India, over the past four years, as economic growth has slowed and earnings have been at a premium, a two-tier market appears to have emerged, especially in the mid- and small-caps. There seem to be pricey, high-multiple, consistent growth stories, and then the rest. Companies that have been able to report sustained growth have got re-rated. Quality and growth as a strategy has been a consistent outperformer since 2009, especially in the mid- and small-cap space. Howard Marks, chairman, Oaktree Capital Management, said, “Markets are like a pendulum; the region of fair value is narrow and most of the times the market swings towards excess or under valuation." 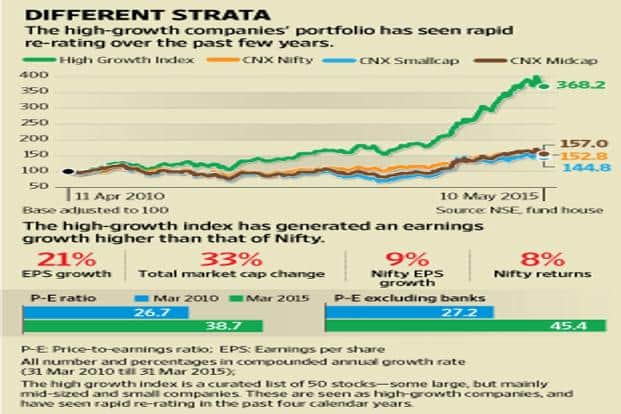 While high growth in earnings should translate into higher earnings multiple, a strategy note by Michael J. Mauboussin, strategist, Credit Suisse First Boston, and Dan Callahan, titled What Does a Price-Earnings Multiple Mean? , aims to clarify the interplay of growth and multiple re-rating. In the note, Mauboussin said that high-growth companies get re-rated as they start generating superior returns on their invested capital, rather than just based on high earnings growth. For investors, superior returns on invested capital should be as crucial as earnings growth. For example, if a company grows its earnings from 10 per share to 15 (over a three-year period), at a glance, this may support re-rating. Actually, what should be seen is the pace at which it accelerates its return on capital employed (RoCE). So, if the company was earlier earning a RoCE of 10% and later 15%, its P-E multiple could be re-rated. But if its RoCE remains 10%, then its P-E will not change.

Thus, investors’ focus should go beyond earnings growth and include RoCE. Improvement in return on invested capital (RoIC) will be an equally critical measure to help identify future winners. Investors tend to wait for actual earnings growth to drop before exiting high P-E stocks. Focusing on RoIC could give them an early indication to exit, and help them optimize their returns.

To reflect the chase for growth, we curated a list of 50 stocks—few large, but mainly mid-sized and small companies. These have been perceived by investors as high-growth. The highlight of this portfolio has been the rapid re-rating that these companies have enjoyed over the past four calendar years. While the price performance of this index has been impressive, how has earnings growth been? The index has generated an earnings of 21% compounded annually, while market cap has increased 33%. The CNX Nifty, on the other hand, has reported an earnings growth of 9%.

Growth the world over has been scarce. Where ever identified, it has led to premium pricing. In India, too, the market has polarized into multiple layers. Conventional stock market wisdom has been to buy quality and forget. Would these valuations offer such security?

Usually stock market cycles swing to extremes, rarely, if ever, being priced at a fair value. Has this cycle of high growth swung to an extreme? A strong case for investing in equities today is the expectation of revival in economic growth and corporate profitability. As corporate profits revive, the incremental growth should be more widely distributed than in the past four years. If we build in such a scenario, then growth should be more uniform and not concentrated. Then, would the current premium being paid offer the best investment return? Will the “quality and growth" strategy play out for the next 2-3 years? These stocks should see increased volatility (over the past four years, a key feature for them has been low volatility). So, be prepared, especially during the earnings season.

Second, these stocks could underperform the broader market, as growth in the second level stocks is revived. The “value and high dividend yield" strategy, which has underperformed during the past four years, could turn tables.

Third, the “higher" quality of these companies should ensure that a correction is more time related than through price destruction.

While buying high-quality growth companies has traditionally led to outperformance, if economic growth and corporate earnings revive, this strategy could underperform. Quality and growth will insure a portfolio from wealth destruction, but may not assure perpetual outperformance.