‘Talk to me’, says RBI governor Shaktikanta Das in relief to markets

Central bank communication is a double-edged sword. Saying too little or too much could queer the pitch for future policy. In Reserve Bank of India’s (RBI’s) case, it was too little in the past few years. This severed smooth channels of dialogue with stakeholders, essential to effective policymaking.

On his first day as governor of the central bank, veteran civil servant Shaktikanta Das made it clear that he is willing to talk to everyone. “Consultation with stakeholders is very important. It adds value and depth to our understanding," he said in his first press meet as RBI chief. 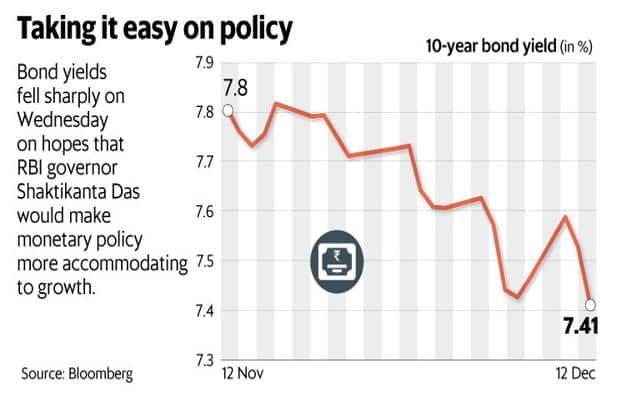 Das will begin consultations with all stakeholders, starting Thursday when he would meet public sector bank chiefs, he said. The RBI governor’s first meeting gives an inclination of his priorities, and it will be interesting to see where he stands on the prompt corrective action (PCA) framework, which was a major bone of contention between the government and the previous governor.

The markets have rolled out the red carpet for Das, not only in anticipation that communication channels would be opened, but also in anticipation of a more accommodative stance on matters such as PCA. Equity indices gained smartly on Wednesday, adding to the gains recorded after Urjit Patel’s exit. The rupee ended marginally weaker against the dollar compared to the previous day’s close, however.

Bond yields dropped 10 basis points on Wednesday on hopes that Das would turn monetary policy accommodative, helping the government fire up growth ahead of the general election in 2019. He made appropriate noises on growth but dodged questions on where interest rates are headed, understandably because it falls under the six-member monetary policy committee. The bond market also thinks Das would be more tolerant on the centre’s fiscal slippages and give adequate liquidity.

Fiscal profligacy is characteristic of any government that is heading into elections and this seems more likely for the current government, whose party has faced defeat in the recent state elections. Needless to say, this is classical short-termism on the part of the markets, and ignores the risks involved in a central bank that toes the government’s line on major policies.

Das on his part attempted to quell such fears. “I will uphold the autonomy and the integrity and the credibility of the Reserve Bank as an institution," he said at the press meet.

Of course, time will test whether Das’s comments on RBI independence are mere tokenisms or serious declaration. The first test would be on 14 December when the new governor would chair the central bank’s board meet. Previous board meets had been a disaster, with communication lines between RBI and the government breaking down.

Analysts see easing of bank regulations and a probable relook at capital adequacy norms. Wednesday’s comments by Das should add to this optimism on banks, considering that the new RBI chief is willing to give market participants a quick hearing. What the market will now watch for is how far he is willing to go, to fire up credit growth.

Under former governor Patel, RBI was in a clean-up mode, forcing imprudent lenders to tighten their belt. As a result, access to finance had become a problem, especially for small businesses. Non-banking financial companies that did the heavy lifting were hit by a liquidity crunch which came with the defaults by a large infrastructure builder. For a government heading into an election year, this was counterproductive.

Das takes over from Patel, who quit in a huff after differences with the government on various issues reached a point of no return. While Patel is credited with fighting for the independence of the central bank, Das is willing to acknowledge that regulators should be accountable.

The jury is out on whether the new governor is willing to accede to the demands of the markets and the government. But for now, he is willing to listen.