Why has Rosneft paid a packet for Essar Oil?

Competition from other suitors, growth opportunities on offer are likely reasons why Rosneft is paying a premium for Essar Oil and its assets

The Essar Group may have been in a debt trap, but there are no signs of distress in the Essar Oil Ltd sale to PJSC Rosneft Oil Co and a consortium led by commodities trader Trafigura and private investment group United Capital Partners. Essar said it has sold a 98% stake in the oil company at an enterprise valuation (EV) of $10.9 billion or Rs72,800 crore.

This works out to around 12.5 times Ebitda (earnings before interest, tax, depreciation and amortization). Most analysts value Reliance Industries Ltd’s refining business at an EV/Ebitda multiple of around seven times at best. Prima facie, Essar has got itself a good deal.

Analysts at Kotak Institutional Equities said in a note to clients, “The formal announcement of the deal at the recent BRICS summit in the presence of the political leaders of India and Russia suggests a high degree of involvement of the Indian government in the transaction. We note that Indian PSU oil companies had earlier purchased a 49.9% stake in the Vankor oil block of Rosneft." 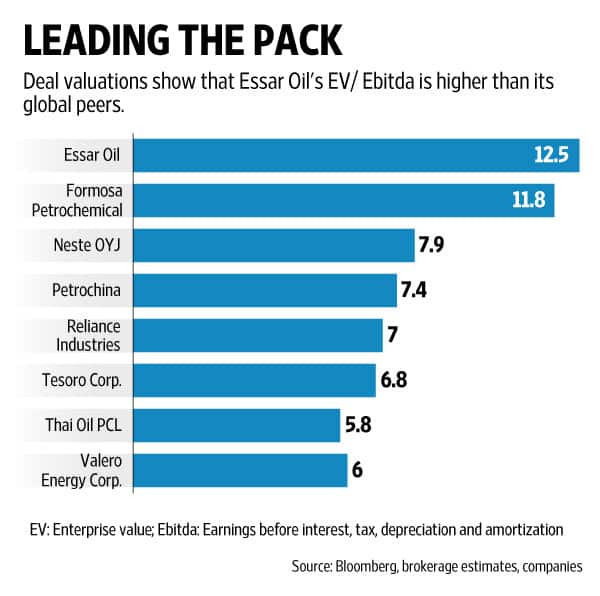 Besides, according to a Bloomberg report, Essar was in talks with as many as five overseas oil companies for the asset sale. It’s natural that Rosneft and the consortium ended up paying a premium when the competition was as high.

That aside, the Essar asset offers decent growth opportunities. The company has had plans to double capacity at the existing plant, but couldn’t do so because of financial constraints. The buyers should be able to follow through on these expansion plans and drive growth.

Besides, Essar Oil’s refinery is in close proximity to the deep draft Vadinar port, which lends greater efficiency to the operations. The port has been acquired in a separate transaction at a valuation of $2 billion. Essar Oil also operates a network of 2,700 retail outlets. They may not have added much to overall profits until now, but their prospects have improved because of increased deregulation of prices of petroleum products.

Rosneft can drive synergies by shipping relatively cheap crude oil from Venezuela and the Trafigura connect will help in selling oil products to Asia-Pacific markets.

Essar Oil currently processes around 145 million barrels of crude oil annually. According to an oil industry analyst who did not want to be identified, it’s safe to assume that the company makes an Ebitda of around $6 per barrel, resulting in an annual Ebitda of $870 million. While this results in an expensive valuation of 12.5 times for the refining asset, this must be seen in light of other growth prospects, the added advantage of the port facility and the retail outlets, he adds.

What about implications of the deal for Indian companies?

The Essar Group’s total debt in the system is estimated to be about Rs1.3 trillion, and this is expected to reduce substantially after the deal. While the group will use the proceeds to pay off debt, bank debt will also reduce, as part of Essar Oil’s debt is being refinanced by a Russian lender, according to news reports.

ICICI Bank Ltd, one of the largest lenders to the Essar Group, has already seen a nearly $1.5 billion rise in market capitalization after the deal announcement. According to Kotak’s analysts, “The deal is a significant event for the Indian banking sector for several reasons... Indian banks have become very forceful in addressing the problem of bad loans; and Indian promoters may have little option but to sell profitable assets to reduce debt; this has been the case for the past two years."

Oil marketers may face some threat to their market share depending on how aggressive Rosneft’s plans for the retail business are. But that may take a while to pan out.