A few Indian oil companies performed well for the three months ended December. The others were lacklustre

A few Indian oil companies performed well for the three months ended December. The others were lacklustre.

As for the state-run refining and marketing companies, Bharat Petroleum Corp. Ltd (BPCL) has had another weak quarter compared to peers, said analysts at Nomura Financial Advisory and Securities (India) Pvt. Ltd. Indian Oil Corp. Ltd (IOC) and Hindustan Petroleum Corp. Ltd (HPCL) had surprised both on refining/marketing margins and inventory gains, said Nomura in a report on 10 February. 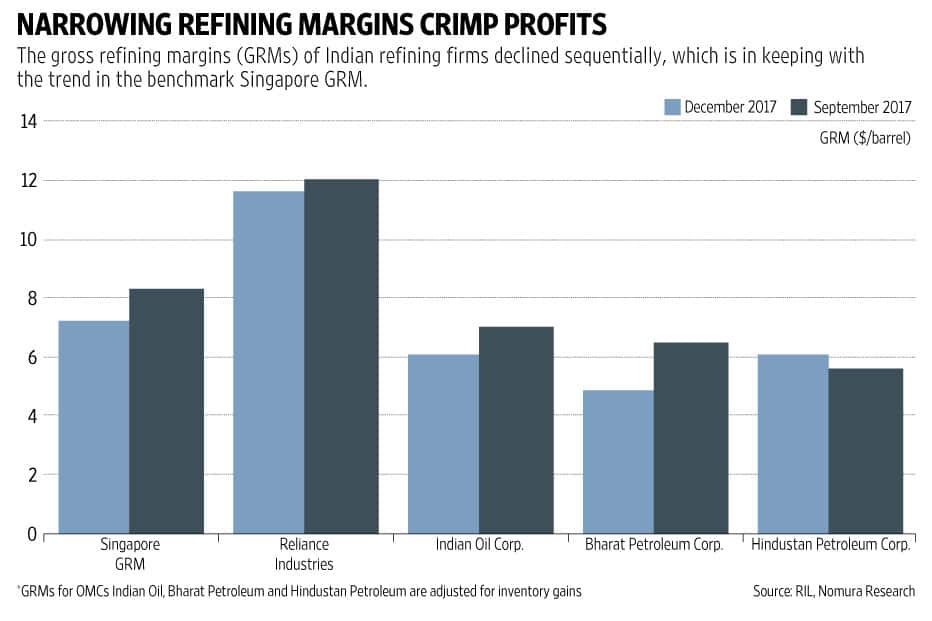 The ongoing stabilization at BPCL’s Kochi refinery weighed on performance. The good news is that the coming quarters are expected to be better, owing to the refinery’s stabilization.

What of the stocks?

Firm oil prices should support realisations of oil producing companies and ONGC’s and Oil India’s shares will take cues from that. What about oil subsidy? According to analysts from Jefferies India Pvt. Ltd, the government’s FY18-19E subsidy provisions (about Rs21,500 crore) are clearly inadequate but this has also frequently changed through the year in the past. “Indeed, the rapid normalization of auto fuel margins and the regular rise in kerosene prices in 2018 give us hope that the government is keen to avoid spiralling under-recoveries as crude prices rise," wrote Jefferies analysts in a report on 9 February.

The performance of the telecom business will be crucial for the RIL stock. Stronger refining margins will augur well for RIL as well as BPCL, HPCL and IOC.