Reliance Jio calls a truce but should investors be relieved?

But Airtel, Idea and Vodafone still have a bloody battle at hand as with its new prime subscription offer, Reliance Jio is clearly targeting the average data user

After months of providing free services, and being accused of predatory pricing in the process, Mukesh Ambani’s Reliance Jio Infocomm Ltd has decided to begin charging its subscribers. Incumbents, such as Bharti Airtel Ltd, Idea Cellular Ltd and Vodafone India Ltd, can finally breathe a bit easier. As they rightly pointed out in the past, you just can’t compete with free services.

But they still have a bloody battle on their hands. Reliance Jio’s new tariff plan is significantly more competitive than the ones announced at the time of its 1 September launch. The new plan reveals a strategy of chasing customers with data needs. So although incumbents might be able to breathe easy when it comes to retaining low value customers who don’t use data services, they will see continued value erosion when it comes to high value subscribers.

Reliance Jio’s new offers apply to those who are enrolled as subscribers before 31 March. For an effective cost of Rs311 per month, they get unlimited voice services and a data allowance of as much as 1GB/day. In contrast, in the plans announced by the company during its 1 September launch, such high data usage plans were priced at Rs1,499 per month and above. 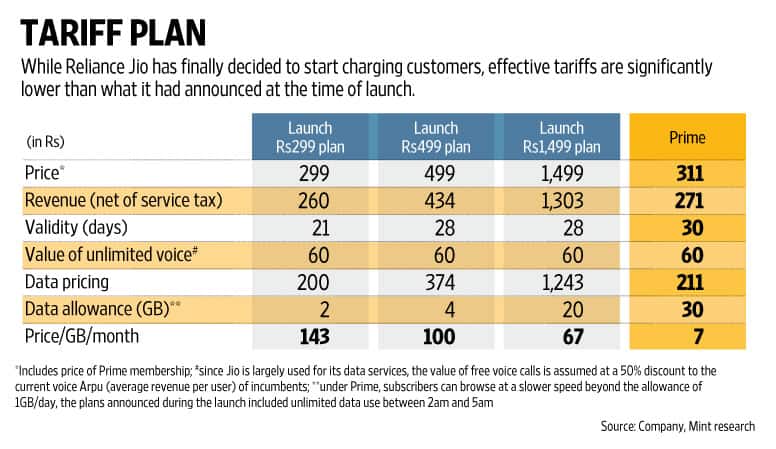 Interestingly, during the initial launch, analysts had noted that Reliance Jio had stayed out of the important Rs300/month price point, which is roughly the amount incumbents’ data subscribers spend on an average. Bharti Airtel Ltd and Idea Cellular Ltd’s average data revenue per user (data Arpu) stands at Rs160-175, while their voice Arpu stands at Rs115-125.

With its new prime subscription offer, Reliance Jio is clearly targeting the average data user. But while incumbents offer a far lower data allowance at the Rs300-350 price point, Jio is offering as much as 1GB per day. They might be forced to take Jio’s lead and offer higher data usage limits. The silver lining is that this will provide a floor as far as Arpu goes. But on the flip side, revenues and profitability of high-value customers can be expected to come down further.

Ahead of Reliance Jio’s launch in September last year, analysts were saying that if Jio prices its data services below Rs100/GB, it will be negative for the sector. The plans announced during the launch, in that backdrop, weren’t all that bad; although, of course, Reliance Jio’s free services for about six months were really disruptive. But the latest plan prices data at less than Rs10/GB, even if voice services are ascribed zero value. It looks like Jio enjoys a considerably lower cost structure vis-a-vis incumbents, which allow far lower price points. Analysts at JM Financial Institutional Securities Ltd wrote in a note to clients that Reliance Jio has significant cost advantages vis-a-vis incumbents and that it is likely to have higher margins than Airtel for similar scale of revenues.

Despite Reliance Jio’s hugely disruptive tariff plans, shares of Airtel and Idea are up 8% and 16%, respectively since Jio’s launch last year. Investors seem to be betting that consolidation in the telecom sector among large companies such as Idea and Vodafone India Ltd will more than offset the drop in revenues and profit owing to a drop in pricing. That might be wishful thinking.

After Bharti Airtel Ltd’s December quarter results, analysts at Kotak Institutional Equities wrote in a note to clients, “We could be down to as low as Rs20,000-25,000 crore in annualized Ebitda (ex-Jio) for an industry sitting on an aggregate net debt in the vicinity of Rs3 trillion (ex-Jio). This is as distressed as it gets, in our view." In this backdrop, consolidation is an imperative for the industry. But as pointed in this column earlier, it is no panacea.