Fundraising from equity markets up 47.1% at $2.9 billion in March quarter

Yes Bank's $750.3 million QIP was the biggest follow-on offering in the quarter

Mumbai: Indian companies raised a total of $2.9 billion in the three months ended 31 March by selling equity and equity-linked securities, a 47.1% increase from a year ago, according to a report by Thomson Reuters.

In volume terms, equity capital market activity saw a 29.3% increase, with the number of transactions rising to 53 from 41 a year earlier. The Thomson Reuters report captures equity market transactions such as initial public offers (IPO) and follow-on offers, including qualified institutional placements (QIP).

Firms raised $2.3 billion through follow-on offers, a 48.4% increase from a year ago, capturing 80.5% of the India equity capital market (ECM) activity. Yes Bank’s $750.3 million QIP was the biggest follow-on offering in the quarter. 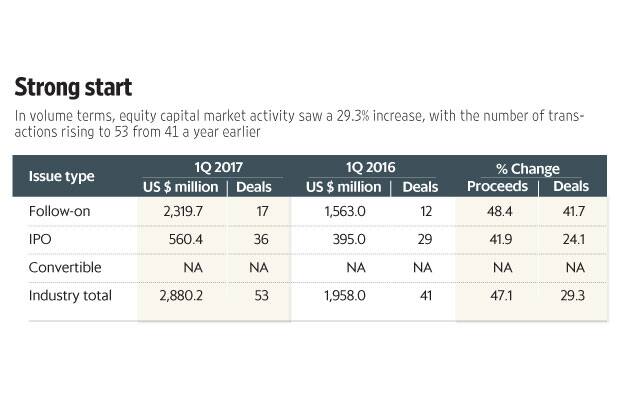 The increase in overall ECM activity was also a factor of larger sized IPOs hitting the market in the first quarter. IPOs raised a total of $560.4 million, an increase of 41.9% in proceeds from the same period last year. This is the strongest first quarter for Indian IPOs since 2010 ($1.1 billion), according to the report.

Financial sector issuances accounted for most ECM activity with a 43.6% market share, raising funds worth $1.3 billion.

The materials sector followed in second place with a 19.7% market share worth $567.9 million in proceeds. Technology and retail followed close behind and captured 9.1% and 7% of ECM activity, respectively.

According to the report, Citibank led the adviser league table with a 14.5% market share, underwriting issuances worth $418.6 million. State Bank of India followed with a 13.6% market share worth $390.7 million in related proceeds. Bank of America Merrill Lynch was third with a 10% market share.

According to Thomson Reuters estimates, India’s equity and equity-linked capital raising generated an estimated fee worth $29.1 million, a 45% increase from the same period last year. Kotak Mahindra Bank led the advisers for ECM fee rankings with estimated $4.8 million in fee revenue, capturing 16.6% of the wallet share in the quarter.