Uday Kotak stake in his bank has investors on edge

While Kotak Mahindra Bank has its conversations with the regulator, investors are left wondering which way the outcome will swing

The Reserve Bank of India’s insistence on promoter stake dilution continues to be an albatross around the neck of Kotak Mahindra Bank. This is reflected in the 9.7% fall in the share price ever since RBI refused to bless an innovative way of bringing down the stake of promoter Uday Kotak in August.

The bank had issued perpetual non-cumulative preference shares to eligible shareholders that increased its capital base by ₹ 500 crore. The private sector lender had argued that following this issue, the stake of the promoter group stood diluted to below 20%. This, it said, fulfilled the central bank’s norms on the same ahead of the deadline of December. However a week after the share issue, RBI refused to give its blessings and this makes the December deadline very real for the bank. 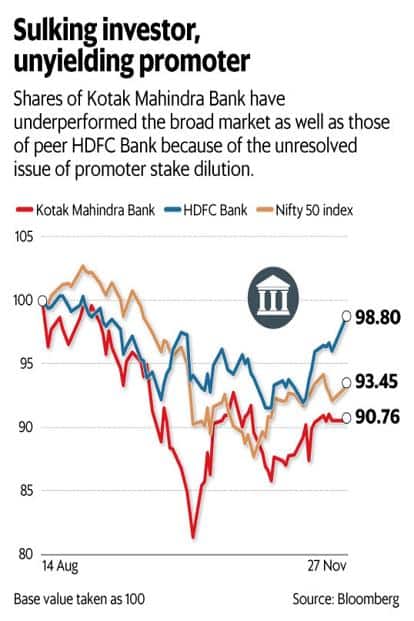 There are no easy options available to Kotak Mahindra Bank’s promoters, who need to bring down ownership from 30.02% to just under 20% by December. It can acquire another lender or finance company, and try and bring the promoter stake down through a share swap. Needless to say, this is easier said than done—the merger with ING Vysya Bank, for instance, has taken more than a year.

Another option is to have a fresh issue of shares. Considering this would mean selling shares worth over ₹ 1.1 trillion at current prices, it is a tall task. Yet another option is for Uday Kotak to sell his excess 10% stake in the secondary market through a block deal. Such a sale would be roughly worth ₹ 22,400 crore ($3.16 billion). This looks tough but is not impossible as investors in other companies have done this before. For instance, in February 2012, Citibank sold a near 10% stake in Housing Development Finance Corp. Ltd (HDFC) in a block deal worth $1.9 billion.

But from the looks of it, Kotak Mahindra Bank seems to be betting that RBI will relent. When it informed investors that the central bank hadn’t approved of its preference shares route for dilution, it added, “We continue to believe that we have met the requirement and will engage with the RBI in this behalf."

In the past, Kotak Mahindra Bank has received extensions, although this time seems different, especially since RBI recently pulled up Bandhan Bank Ltd for failing to meet its deadline on the stake dilution norms. Bandhan Bank’s shares are still about 18% down since the central bank’s decree, which says that it cannot open new branches without its approval.

Analysts say that missing the deadline on promoter shareholding norms would be disastrous for the Kotak Mahindra Bank share prices as well.

Operationally, taking approvals for new branches may be cumbersome, but may not have much of an impact. Kotak Mahindra Bank has anyway been slow in adding branches, especially after ING Vysya’s acquisition, and is instead pushing its digital channels more. Nevertheless, investor sentiment will be hit and its valuations may begin to reflect the cost of running afoul of the regulator.

While Kotak Mahindra Bank has its conversations with the regulator, investors are left wondering which way the outcome will swing. Until this is sorted out, the stock is unlikely to break free of the current downward trend. Its valuations offer no help too, as at a multiple of five times estimated book value for FY21, they are viewed as rich. Firms like Elara Capital Plc have a sell rating on the stock due to high valuations and the unresolved promoter holding issue.