Thanks for Visiting Mint
You seem to have an Ad Blocker on. Please turn it off in order to continue, or whitelist Mint
HOW TO TURN OFF AD BLOCKER
OR
REFRESH IF YOU ALREADY TURNED OFF THE AD BLOCKER
Home >Money >Calculators >Is your balanced fund taking too much risk?

Is your balanced fund taking too much risk?

How can a fund with just two-thirds of an equity exposure outperform another that’s entirely invested in equity?

For all the conservativeness that balanced funds embody in terms of debt exposure (typically 35-40%), they try and make it up by buying equities aggressively. Most portfolios of balanced funds we looked at had a reasonable to high exposure to mid- and small-cap companies.

We looked at their underlying companies’ market capitalization break-up, with a six-monthly gap, from the end of January 2011 till June 2014 and also their October 2014 portfolios. Schemes such as HDFC Prudence Fund, SBI Magnum Balanced Fund, Escorts Balanced Fund, Canara Robeco Balanced Fund and L&T Prudence Fund have close to or more than 20% in small-cap companies, as per data provided by Value Research, a mutual fund (MF) tracking firm.

As is with others types of schemes, fund managers of balanced funds also try to maximize gains. Since these schemes invest a chunk of assets in fixed income and also invest in large-cap companies, fund managers try to manage the rest of the portfolio aggressively. And aggressiveness comes by way of small-sized companies whose share prices jump faster than the rest in rising markets.

Does this mean compromising on quality?

“No," said Prashant Jain, chief investment officer, HDFC Asset Management Co. Ltd. “Small- and mid-cap companies add liquidity risk, not necessarily business risk. If you look at our portfolio, you’ll realize that smaller companies are market leaders in their industries. Yes, in falling markets, liquidity of such scrips get impacted, but our debt portfolio and allocation to large-sized companies make up for such eventualities," he said. HDFC Prudence, a balanced fund that Jain manages, has consistently seen a rise in its small-cap allocation from a low of about 17% in January 2012 to 26% as per its October 2014 portfolio.

Anoop Bhaskar, who heads equities at UTI Asset Management Co. Ltd, said such exposures “per se" aren’t bad but a balanced fund shouldn’t keep changing its underlying market cap allocation “drastically". “For a scheme that is typically positioned between an equity fund and a debt fund on the risk-return ladder, it doesn’t make sense for the texture to change colours frequently," he added. Such active or aggressive management could lead to variation in returns at times, he said. Bhaskar’s own UTI Balanced fund has invested about 65% on an average in large-cap scrips and the rest in mid- and small-sized companies. 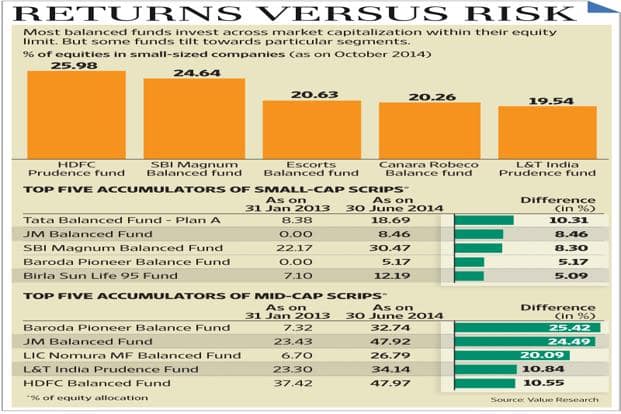 Is small a bad size?

Prima facie, just because an equity-oriented fund invests in small- and mid-caps, doesn’t mean it’s a bad fund. Mint50, Mint’s curated list of 50 schemes that we recommend to our readers, also has its fair share of mid-cap funds, some of which specifically focus on small companies.

Jain says that fund managers should focus on the potential of the business in which the companies operate, and their fundamentals. “A car company may become large over a period of time, but a tyre manufacturing company or a car battery company would most likely remain a small to medium sized company. These are some of the business segments that are unlikely to become large. But you can find solid, good quality companies in these segments too," said Jain.

Financial planners say it’s important that fund managers stick to their mandate. “If your balanced fund says that it would tilt towards large-caps, then that’s what it is supposed to do," said Mumbai-based planner Suresh Sadagopan.

Franklin India Balanced Fund, for example, is a balanced fund and has specifically mentioned in its offer document that “the equity portion of the scheme will invest in diversified portfolio of stocks with predominant exposure to large caps". HDFC Prudence, another balanced fund, however, doesn’t specifically mention the target market cap in its scheme information document.

“We prefer to invest our clients’ money in funds that come with a specific mandate and also stick to it. If a scheme says it will invest in large-caps, then it should invest in large-caps. Just because mid-sized companies start doing well, the scheme shouldn’t deviate into such scrips," said Sadagopan.

But it’s not as simple as that. On the one hand, fund houses and distributors position balanced funds as being more conservative than a typical equity fund. Reason being: a lower equity exposure. On the other hand, the underlying securities of a balanced fund could get riskier than those held by a diversified equity fund, especially a large-cap scheme.

The question is: is it proper, therefore, on the part of balanced funds to invest in small- and mid-sized companies in the first place?

R. Srinivasan, head, equity, SBI Funds Management Co. Ltd, said, “Proper or improper is a function of perspective. If the question is whether it’s improper to own small-to-mid-caps in a balanced strategy, the answer is no. It is only improper if the same has not been communicated effectively. When you say they (balanced funds) are meant to have a lower risk profile than equity funds, it is important to define what ‘equity funds’ means in terms of exposure."

Many schemes have exposure to different market caps. “Unless you are talking about pure large-cap funds, most others have a meaningful exposure to mid- and small-caps. So, given that balanced funds have a debt exposure, they are probably lower risk than most of these (equity funds). (But) they are probably more risky than some pure large-cap funds," said Srinivasan, adding that the large-cap-mid-cap argument is an over-simplified version of risk.

Most balanced funds have a lower standard deviation than most equity funds at all times. In our comparison (about 71 schemes in all), only HDFC Prudence Fund’s standard deviation has gone up of late. This tells us that while balanced funds do get aggressive in one segment of their portfolio, the other segments (large-cap and debt holdings) rein in the volatility. Also, a high standard deviation does not make HDFC Prudence a bad scheme. The scheme has, in fact, been a part of Mint50 for a long time, and its management has handled the portfolio well so far.

It would, however, help if balanced funds elaborate a bit about their equity strategy; whether they’ll stick largely to large-cap scrips or invest in stocks across market caps, and so on. For now, investors can select balanced funds that are a part of Mint50. In addition, you could go through the offer documents to find out how the scheme will allocate its funds.