Mumbai: India’s market regulator has questioned whether directors of the National Stock Exchange of India (NSE) had failed in their fiduciary responsibility of maintaining market sanctity by allowing unfair access to some brokers in its co-location platform.

Separately, the Securities and Exchange Board of India (Sebi) is also investigating whether any NSE officials had colluded with brokers and made illegal gains, two people aware of the matter said. 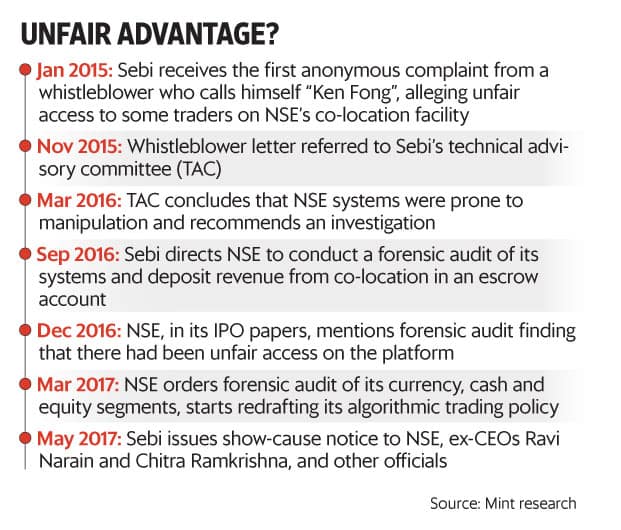 In show-cause notices issued to NSE and some of its officials, both current and former, Sebi asked why action should not be initiated against them for allegedly violating Stock Exchange and Clearing Corporation regulations and Prevention of Fraud and Unfair Trade Practices. These show-cause notices have been issued under Section 11 of the Sebi Act, said one of the two people cited earlier. Section 11 pertains to the competent authority giving directions, in this case a whole-time member of Sebi.

The Economic Times first reported on Saturday that the show-cause notices were sent to NSE last week.

According to the two people, who spoke on condition of anonymity, notices have been sent to Ravi Narain, vice-chairman of NSE, who was serving as chief executive officer and managing director at the exchange during the period when the alleged violations took place. Other officials include Ravi Varanasi, who heads NSE’s business development vertical and was heading the surveillance department of the exchange during the period, and  Suprabhat Lala, chief of regulation and head of the trading division during 2010-13.

A spokesperson for NSE said that as the matter was between the exchange and Sebi, it would not be able to comment on it. There was no response as of press time to an email sent to Sebi seeking comment.

“As part of Sebi investigation into the matter, the regulator has sent notices to a few officers in technology and business operations to seek their input. NSE and the employees will take legal advice and respond accordingly. Proper processes are being followed and this will bring the matter to a conclusive end," said the second of the people cited earlier.

The matter pertains to allegations by a whistleblower that certain brokers were able to log into NSE systems with better hardware specifications, allowing them unfair access and advantage. The issue was first highlighted by Sebi’s Technical Advisory Committee, which had recommended a probe against the exchange in April last year.

Following this, the regulator in September 2016 asked the exchange to conduct a forensic audit and deposit the revenues being generated out of the co-location facility in an escrow account.

NSE, in its share sale document on 28 December, disclosed that a forensic audit by Deloitte India, showed that its algorithmic trading platform and co-location facility were “prone to manipulation" and allowed “potential preferential access" to some brokers.

Co-location refers to trading members locating their servers on the premises of the exchange. This reduces the time it takes for an order to travel to the exchange, giving them a speed advantage over those who are further away.

The forensic audit could not ascertain collusion between NSE officials and brokers but said that many employees took oral instructions from senior officials in matters pertaining to algorithmic trading. Since then NSE has redrafted its algo policy.

Separately, Sebi is probing around 15 brokers who allegedly received unfair access and show-cause notices would be issued to them soon. NSE is undergoing a second forensic audit of its systems being done by EY on its cash, currency and equity platform.

“If there are findings in EY this will be treated as a separate exercise," said the first person.

A quick resolution will help the exchange to go ahead with its initial public offer (IPO) which is currently kept pending by the regulator due to the investigation in the matter. Sebi's website says NSE’s IPO documents are pending clearance due to a “policy issue".

“It is somewhat unprecedented for any exchange to go public under the remarkable situation surrounding the current investigation into co-location. The likelihood is that the multiple would be damaged both by the revenue withheld by Sebi not to mention the reputational damage. It’s difficult to see how NSE can really plough on with an IPO in short order without these issues being addressed," said Patrick Young, a capital market expert and chief executive officer of crowdfunding platform Hanza Trade.

Jayshree heads a team of reporters focussing on legal, regulatory, investigative stories. She has worked for over a decade, reporting on financial scams, legal stories and the intersection of corporate and regulatory issues. She is based in Mumbai and has previously worked with Business Standard, Mint, The Morning Context and Bloomberg TV India.
Read more from this author
Catch all the Business News, Market News, Breaking News Events and Latest News Updates on Live Mint. Download The Mint News App to get Daily Market Updates.
More Less
Topics
mint-india-wire
OPEN IN APP