Mumbai: The rupee strengthened by about 20 paise after opening at 54.04 to the dollar amid speculation about sales of the US currency by the central bank and profit booking by foreign banks. The rupee fell to a record close of 53.975 to the dollar on Monday following a slide in global currencies against the greenback.

The central bank intervention at the 54 level gave a signal to banks that RBI wants the rupee to stay below that, persuading some banks to liquidate their dollar holdings, traders said.

“RBI intervened in the market at 54.7 level, but stayed out after that. It is strengthening now as foreign banks are selling dollars to book profit," said a senior currency dealer at a foreign bank requesting anonymity. 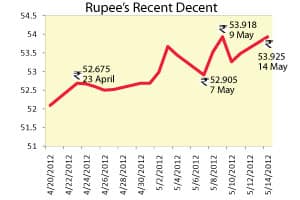 RBI had said on Monday that it will buy bonds worth up to ₹ 12,000 crore, a move seen as infusing cash into the system, which is strapped for liquidity to the extent of as much as ₹ 1 trillion a day.