The importance of the Consumer Price Index

Here are five things you must know about this index

In the recent months, the Reserve Bank of India (RBI) has shifted to Consumer Price Index (CPI) as the preferred measure of inflation. Here are five things you must know about this index.

Why does RBI now want to target CPI rather than the Wholesale Price Index (WPI)?

CPI reflects the prices of our consumption basket rather than that of goods sold in the wholesale market. But almost 75% of CPI is common with WPI. It also includes rentals (9.8% weight), transportation and communication costs (7.6%), medical care (5.7%) and school fees (3.4%).

Why is CPI higher than WPI?

Food, whose prices are rising, has a larger share in CPI (50% versus 24% in WPI) in contrast to metals, whose prices are falling, that has 11% share in WPI. Over the past two years, CPI inflation, at 10%-plus levels, has exceeded WPI inflation at 5.5-7.5%. This is because food price inflation has remained high at 10-13% levels while metal price inflation has weakened to 0.9% from 11.0% in April 2012 on falling demand.

Further, within the new CPI, rural-CPI has been higher than urban-CPI in periods of high food inflation as food carries a disproportionately higher weight in the former at 59.3% against 37.2% in urban-CPI. 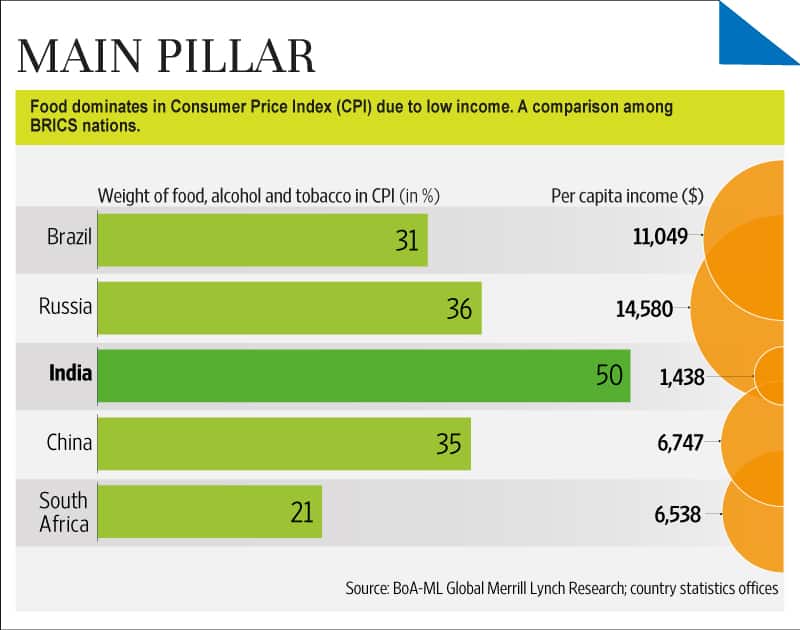 But there is no major difference between the price paths of a particular item that enters both WPI and CPI, accounting for trader margins. Prices of, say, food in CPI follow that in WPI, sometimes with a lag, as food articles move from the wholesale to the retail market.

According to calculations, a 5% swing in food prices directly affects CPI inflation by 250 basis points (bps; one basis point is one-hundredth of a percentage point).

Also, 5% depreciation will affect CPI inflation by about 100 bps. Almost 33% of the CPI is sensitive to the rupee. It is only natural that 5% depreciation will change the prices of these items somewhat less as many other input costs are largely domestic. Just as importantly, most of the large depreciations take place during recessions when corporate pricing power to pass on costs is relatively low.

This is due to improvement in standards of living as well as data issues in housing prices. Core-CPI inflation has averaged 7.1% since 1997 (7.7% excluding housing price distortions of 2006). This has been consistently higher than core WPI.

Core-CPI inflation is just 40.8% of CPI. Second, 7.6% is transport and communication that is driven by volatility in fuel prices. Third, school fees (3.4% of basket) and medical costs (5.7%) are not that sensitive to RBI action. Finally, there are issues with housing price inflation data. Within core CPI, urban core has been higher than rural core primarily in periods of high housing inflation. Once we adjust urban core for housing, we find that rural core overtakes.

Yes, if there is a confluence of favourable factors—a stable rupee; relatively stable global food prices; delays in pass-through from global to domestic oil prices; and unusual drops in housing prices.

In any case, the Patel Committee has estimated the growth optimizing threshold inflation higher between 6.2% and 6.7% for CPI and 4.6% and 5.8% for WPI. This begs the question, why has CPI inflation more than doubled to 9.7%, on average, during FY2008-14 from 4.3% in FY2000-07? Overall growth, harvests and broad money growth were pretty much comparable. So, what changed?

Rupee depreciation has been the main culprit. It aggravated the already delayed pass-through of the rise in global oil prices to domestic oil prices. It also amplified the pressure that higher global agro prices have put on domestic agro prices. At the same time, the government lost the ability to shield domestic agro prices from global food price fluctuations as it has already pared tariffs to the bone in mid-2000s. Further to these, housing prices dropped in 2006 due to data distortions.