Soon it will be a year since the government deregulated diesel prices. What’s more, there has been a substantial drop in global crude oil prices. How much did Indian consumers gain?

The price of the Indian basket of crude oil has declined sharply by 36% from 31 October 2014 to ₹ 3,283.36 a barrel on 9 October 2015, helped by a decline in international crude oil prices, according to data from Petroleum Planning and Analysis Cell. Unfortunately, retail prices in India haven’t dropped as much. For instance, retail price of diesel in Delhi decreased by about 16% (see chart). The difference can be explained by the increase in excise duty of ₹ 5 per litre of diesel between November and January.

A higher base and higher tax component as a percentage of retail prices has meant the benefits for the consumer on petrol have been even lower. 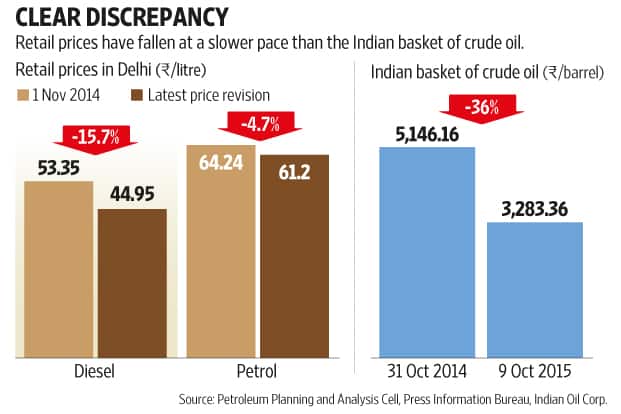 According to Harshad Borawake, vice-president (research) at Motilal Oswal Securities Ltd, the tax component (as a result of excise duty hikes, value-added tax, etc.) on diesel increased from 18% to 38%, while it increased from 31% to 49% on petrol from November 2014 till now. As a result, retail petrol prices have declined by only about 5% since 1 November.

Apart from taxes, there’s another factor, according to analysts, that leads to discrepancy between the fall in retail and Indian basket prices (which is a broader measure). It is the decline in specific product prices and related crack movements.

Like India, some other countries too have seen relatively slower fall in domestic fuel prices (combination of tax and profit margin for companies), said Borawake. Of course, keeping back the lion’s share of the fall in prices will lead to an improvement in the government’s fiscal position.

The fact remains that the consumer did not enjoy the full benefits on account of the drop in crude oil prices. The government chose to retain a decent portion of the benefits instead of passing it on to the consumers. While a decline in petrol prices would impact consumers who own passenger cars, the impact of lower diesel prices would have been substantial.

Lower diesel prices would have helped in reducing freight costs and eventually led to a decline in cost of goods and resulted in some improvement in purchasing power, which in turn could have boosted consumption.