Economic expansion slowed to 7.1% in Sep quarter, worse may be in store

New Delhi: India’s economy expanded at a slower-than-expected pace of 7.1% in the fiscal second quarter despite a lower base, prompting analysts to cut their growth estimates for the full year.

The September quarter gross domestic product (GDP) growth rate is sharply slower than the 7.5% estimate of economists in a Bloomberg survey.

The slowdown in growth momentum, along with benign retail inflation, may prompt the Reserve Bank of India (RBI) to keep interest rates unchanged in its bi-monthly monetary policy review on 5 December.

The GDP data, released by the Central Statistics Office, or CSO, two days after the back series data spurred a political slugfest, reaffirms that the first quarter growth of 8.2%, a nine-quarter high, was an aberration and is unlikely to be repeated soon. “Manufacturing growth at 7.4% and agriculture growth at 3.8% is steady. Construction at 6.8% and mining at -2.4% reflect monsoon months deceleration. Half-year growth at 7.4% is still quite robust and healthy," he added.

The second half (October-March) of 2018-19 is also likely to see moderation of GDP growth on the back of lagged impact of higher interest rates, high oil prices, a weak rupee and a liquidity squeeze faced by non-banks. 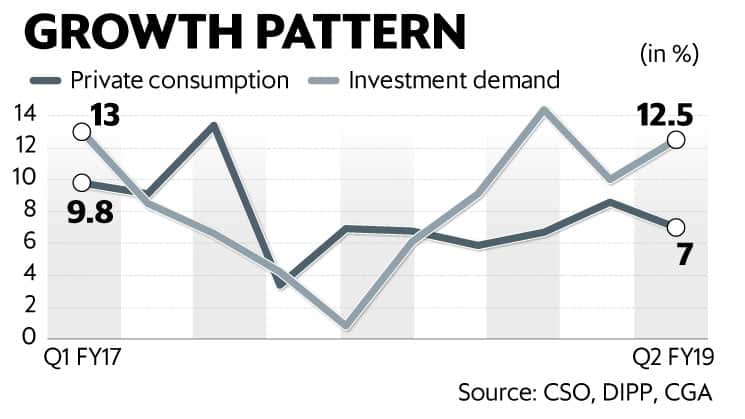 “For fiscal 2019, we are lowering our GDP growth forecast by 10 bps to 7.4% from 7.5% estimated earlier. The forecast has a downward bias, given that global growth prospects are turning weaker than estimated earlier. Also, if liquidity issues persist in the financial system, demand could get further dented," Crisil chief economist D.K. Joshi said.

Given the risks posed by the rise in commodity prices and the depreciation of the rupee, as well as the availability and cost of financing for some sectors, Aditi Nayar, principal economist at ICRA Ltd, said she expects a shallow recovery in GDP growth to 7.2% in 2018-19 from 6.7% in 2017-18.

The International Monetary Fund in its October World Economic Outlook has called for a further tightening of monetary policy in India as inflation was expected to pick up, while keeping its India’s growth projection unchanged at 7.3% for 2018-19.