China’s decision to cut tax on iron ore production will help its miners reduce costs by $3-4 a tonne, according to a Financial Times report. While this may help Chinese mines produce even as prices decline, it can worsen supply pressures. Last week, iron ore with 62% grade for delivery to Qingdao was trading at $47.5/tonne, down by a third from the start of 2015 and by 60% from a year ago.

Large additions to supply by miners such as Rio Tinto Plc and BHP Billiton Plc have punctured prices. Smaller, higher cost iron ore producers are feeling the pressure on sales, margins and cash flows while the bigger ones enjoy a lower cost structure.

In a recent report, Citi Research has forecast iron ore prices at $37 a tonne in the second half of 2015 bringing down its full-year annual price forecast to $45 per tonne from $58. It expects prices to hover around $40 till 2018 and to pick up only from 2019 onwards. 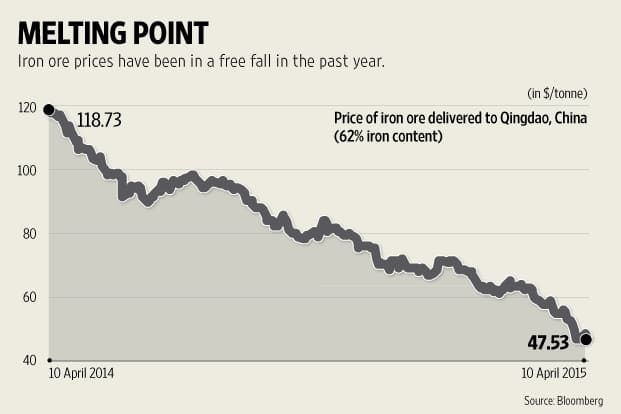 This situation of declining profitability comes at a time when India’s iron ore output is set to pick up as regulatory issues are being resolved. Citi expects Sesa Sterlite Ltd’s Indian iron ore Ebitda (earnings before interest, taxes, depreciation and amortization) margin to fall from 9.6% in 2014-15 to 3.3% in 2015-16 and then further to 1.7% in the next fiscal year. However, revenue may hold steady because of higher output.

Falling prices also coincide with the Indian government proposing rules for states to allot mines through e-auctions. Bids will be based on sharing with the government instead of a fixed per-tonne payment as devised for the coal block auctions. A revenue-sharing arrangement ensures that both miners and the government benefit during good times and share the pain during tough times such as the current period. But the state of the mining industry—falling profitability and cash flows—may well reduce its appetite for these auctions.

These levies could have been absorbed easily when prices were soaring and the industry was making super-normal profits. But their bunching together at a time when the industry is facing a sharp slump will pinch hard.