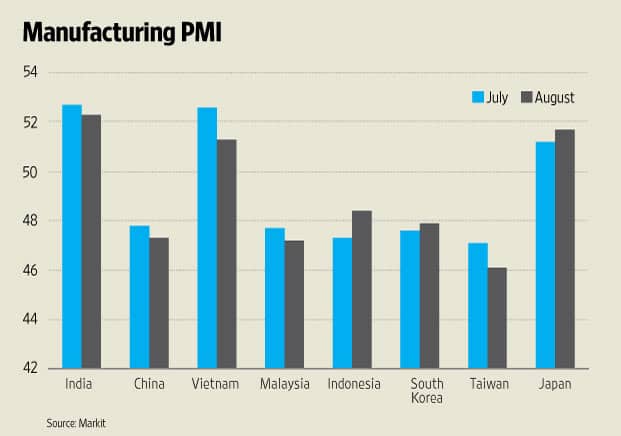 Here is a compilation of comments in the Markit press releases about the Asian PMIs for August:

China: The quickest deterioration in operating conditions for over six years.

South Korea: A solid deterioration in operating conditions at manufacturers.

Taiwan: The fastest deterioration in overall operating conditions faced by manufacturers for 35 months.

Malaysia: The strongest deterioration in operating conditions at manufacturers in nearly three years.

India: At 52.3 in August, down from July’s six-month high of 52.7, the seasonally adjusted Nikkei India Manufacturing Purchasing Managers’ Index (PMI) pointed to a further, although weaker, improvement in the health of the sector.

The key takeaways from the data are:

1) The Asian region is seeing a huge slowdown, partly the result of the spluttering of their export-led growth model and partly the effect of the slowdown in China.

2) India stands out as a beacon of growth in Asia.

3) As Pollyanna de Lima, economist at Markit, points out about India: ‘As inflation concerns fade and demand growth loses momentum, further accommodative policy should not be discounted.’

In other words, a rate cut could further boost Indian growth.