Inflation went up sharply in Q1

Inflation computed by taking the GDP deflator works out to 7.7% against 6.4% in the previous quarter

Inflation computed by taking the gross domestic product (GDP) deflator for the first quarter of fiscal 2013 (FY13) works out to 7.7% year-on-year compared with 6.4% in the previous quarter. The Reserve Bank of India (RBI) will now have even less reason to loosen monetary policy. 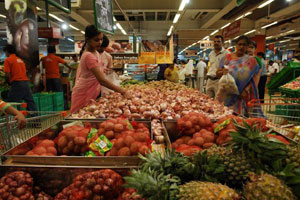 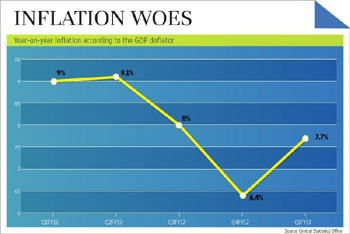 The chart shows the inflation rates in the last few quarters, using the GDP deflator. Inflation has been steadily going down from 9.1% in the second quarter of FY12 to 6.4% in the fourth quarter. However, it has gone up again in the first quarter of the current fiscal year. With the benefit of hindsight, the increase in the inflation rate in the June quarter seems to suggest that RBI may have been too hasty in cutting its policy rate by 50 basis points on 17 April. A basis point is one-hundredth of a percentage point.

Incidentally, inflation computed according to WPI does not show a sharp jump between the March and June quarters. However, there is a similar jump in the Consumer Price Index in the June quarter compared with the March quarter, largely due to higher food prices.