After four successive quarters of falling short of the top end of its quarterly revenue guidance, Wipro Ltd has finally managed to beat its projections for the quarter ended September. 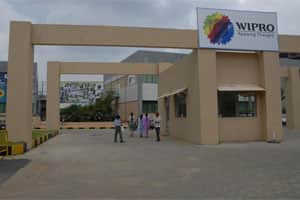 But the markets were far from impressed. Wipro’s shares fell by 2% on the National Stock Exchange on Monday, while the CNX IT index ended the day’s session flat.

Even though the headline revenue growth number looks decent, this was propped up by inorganic growth. Organically, revenue growth was about 2.9%, hardly enough to excite investors.

It wasn’t as if the markets were expecting anything extraordinary, given the fact that the company only recently went through an organizational restructuring. Even so, an organic growth rate of less than 3% is not enough to change investor perception about the stock.

According to an analyst with a foreign brokerage firm, growth can be expected to remain sluggish in the near term, and there’s nothing in the September quarter results to re-rate the stock.

For a change though, the results aren’t very disappointing either. Margins in the information technology services business fell by 200 basis points sequentially, which was expected, given the wage hikes and the integration of the Science Applications International Corp.’s acquisition, a company that operates at lower margins compared with Wipro. One basis point is one-hundredth of a percentage point.

A pre-results report by Nomura says, “We see the economic uncertainty setting back Wipro’s revival efforts, adding to the high risks to growth in FY13 on account of weak near-term deal flow and slow decision-making reducing the possibility of a near-term revival."

Given this backdrop, Wipro’s stock may continue to underperform that of peers, as it has in the past one year.