OTHERS : Mumbia: Benchmark indices BSE Sensex and NSE’s Nifty 50 advanced 1% led by gains in FMCG and finance stocks. The Indian rupee strengthened for the eighth straight session to hit a fresh three-month high against the US dollar after crude oil prices dropped below $60 a barrel. In global markets, stocks advanced in Europe and Asia and U.S. futures pointed to a higher open as investors switched focus to the outlook for trade and interest rates in the wake of another miserable week in markets, Bloomberg reported. Oil prices recover after a nearly 8-percent plunge the previous session, but Brent failed to hold above $60 per barrel. Markets are also bracing for a crucial meeting between U.S. and Chinese leaders at the end of the week. Here are the highlights from the markets: 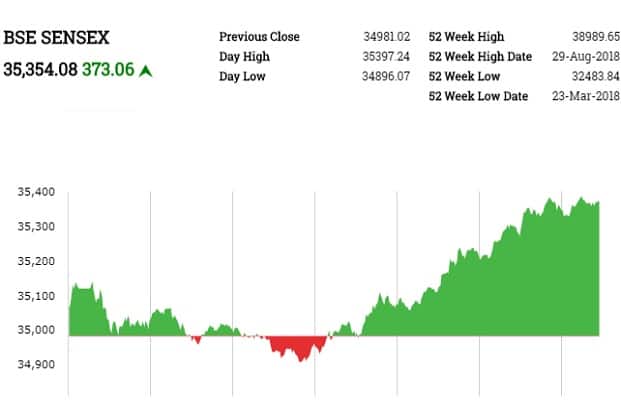 Shares of Oil India Ltd declined as much as 2.9% to Rs 199.2 per share, their lowest in 10 days. Moody’s said on Friday that the company’s proposal last week to buy back shares worth around Rs 1,086 crore is credit negative. Moody’s expects the company’s net borrowings to increase to Rs 11,000 crore by March 2019, up from Rs 9,000 crore as of March 2018. Net borrowings increase is also driven by expectation that company will continue to pay high shareholder dividends and have higher capital spending in FY ending March 2019. Reuters

Big FMCG companies have shown good growth, so smaller firms racing ahead is not a worry for investors. Since nothing is permanent keep a watch on that https://t.co/Kc2NTxmhQ8 @ravi_ananth

Hotel Leelaventure shares hit a 20% upper circuit to trade at 10.62 per share after the company said it is evaluating various offers that could add value to the company. It, however, added that it does not have any binding contract with any investor as of now. The clarification came after the Financial Express reported that Thailand-based Minor International plans to buy a majority stake in the company for $350 million..

The Tata conglomerate is now likely to be the potential white knight for the debt-laden company, but no proposal has been made yethttps://t.co/HXE0PXqU3c

Lupin gets USFDA approval for generic version of Anafranil capsules 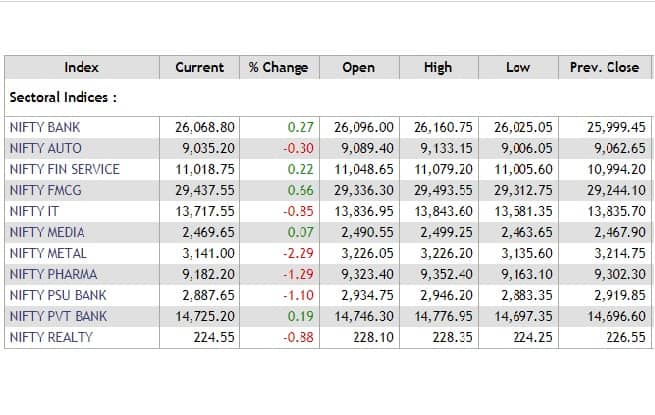 Vodafone Idea has little choice, but to wait for Reliance Jio to relent on the tariff war. https://t.co/ZHz7Dj0AJe

Shares of metal companies traded lower today, with the Nifty Metal Index down over 1%, as metal prices fell amid weak demand in China. Steel-linked metals nickel and zinc lost ground as expectations of weaker demand from Chinese mills dented prices, reported Reuters. All other base metals fell amid caution ahead of trade talks between United States President Donald Trump and Chinese President Xi Jinping later this week.Shanghai zinc hit a two-month low of 20,330 yuan a tonne, while London zinc was down 0.46% at $2,507.5 a tonne. London nickel traded 1% weaker and Shanghai nickel dipped 0.3%. 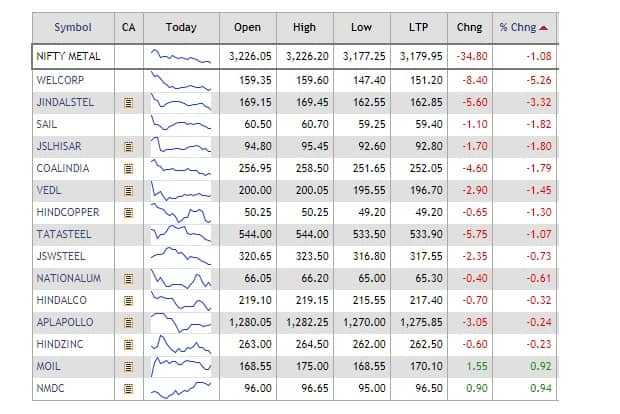 By the time the results are out, most of the uncertainty is priced in and the equity market moves on from the verdicthttps://t.co/fhfyIDFshL

IT stocks fall as rupee advance for 8th day

Shares of IT companies declined today as the Indian rupee advanced for the eighth session and hit a three-month high. At 10.12am, the rupee traded at 70.42 a dollar, up 1.07% from its previous close. The Nifty IT Index was down nearly 1.5%, dragged mainly by Tech Mahindra, Infosys and HCL Tech. 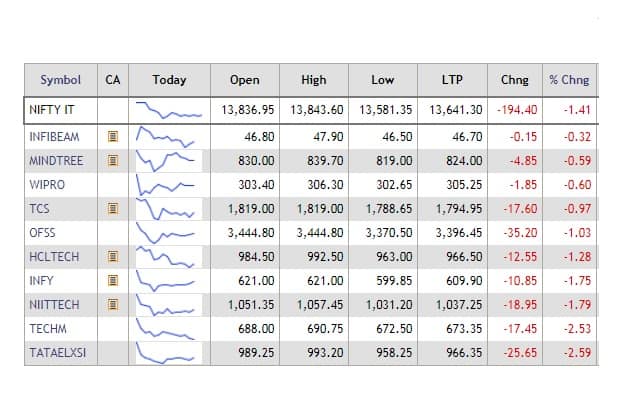 Shares of oil marketing companies Hindustan Petroleum, Bharat Petroleum and Indian Oil rose around 4% as crude oil prices traded below $60 per barrel. BPCL shares rose as much as 3.8% to Rs 332.90 per share, HPCL gained 4.1% to Rs 253 per share and IOCL advanced 3.5% to Rs 143.15 per share. Oil prices won back some ground after hefty losses on Friday, but remained under pressure with Brent crude below $60 per barrel amid weak fundamentals and struggling financial markets. Front-month Brent crude oil futures were at $59.20 per barrel, up 40 cents, or 0.7%, from their last close.

Bharti Airtel shares up over 3% on Africa unit IPO progress

Yes Bank shares fell as much as 4.85% to Rs 186.05 after a news report that the investors debate about the fate of mutual fund holdings of the debt issued by two promoter companies after the bank’s stock price halved from its peak in August.

Rupee trades higher against US dollar

The Indian rupee strengthened for the eighth straight session on Monday to hit a fresh three-month high against the US dollar after crude oil prices dropped below $60 a barrel, easing worries over the current account deficit and inflation. At 9.13am, the rupee was trading at 70.39 a dollar, up 0.46% from its Thursday’s close of 70.70. The currency opened at 70.52 a dollar. Markets were closed on Friday due to Guru Nanak Jayanti. The 10-year government bond yield stood at 7.681% from its previous close of 7.711%.

Trend in the rupee and crude oil prices would continue to influence trading sentimentshttps://t.co/6Y9Ca8Chvc

Oil prices steadied after plunging nearly 8% in the previous session, but remain under pressure with Brent crude below $60 per barrel amid weak fundamentals and struggling financial markets. Front-month Brent crude oil futures were at $59.23 per barrel at 0202 GMT, up 43 cents, or 0.7%, from their last close. U.S. WTI crude futures, were up 11 cents, or 0.2%, at $50.53 per barrel. The gains did little to make up for Friday’s selloff, which traders have already dubbed ‘Black Friday’.Gold prices were little changed on Monday with investors looking to a G20 meeting this week for signs of a thaw in the Sino-U.S. trade conflict, although a stronger dollar amid fears of a slowdown in global growth weighed on bullion. Spot gold was little changed at $1,222.36 per ounce at 0114 GMT. U.S. gold futures were flat at $1,223.3 per ounce.Metals: Steel-linked metals zinc and nickel fell by almost 1% in early trade on Monday, extending last week’s drop on expectations of lower demand from Chinese steel mills. LME zinc fell to $2,480 a tonne, the cheapest in more than a week and traded last at $2,496, still comfortably far from near two-year lows below $2,300 hit in August. LME nickel fell 0.8% to $10,825 a tonne, near a 13-month trough plumbed on Friday at $10,735. Reuters