What keeps the Maruti Suzuki stock ticking? It is investor faith in the auto maker's story of premiumization of its product portfolio

The transition to the goods and services tax (GST) hit Maruti Suzuki India Ltd’s profitability for the June quarter, as it did for scores of other firms. The management, in an analysts’ call, clarified that a 50 basis point impact due to compensation given to dealers for GST-led losses and a 30 basis point hit on account of higher-than-normal discounts dragged operating margin down to 13.3%. This was far lower than the 14.2% pencilled in by analysts polled by Bloomberg. A basis point is 0.01%.

Higher raw material costs also ate into margins. As a percentage of sales, they rose by 220 basis points year-on-year. Thankfully, volume growth was 13% year-on-year, which along with price hikes taken earlier lifted net revenue by 17.5%. The robust revenue supported operating profit that rose by 5.2% to Rs2,331 crore. However, this too disappointed the Street. 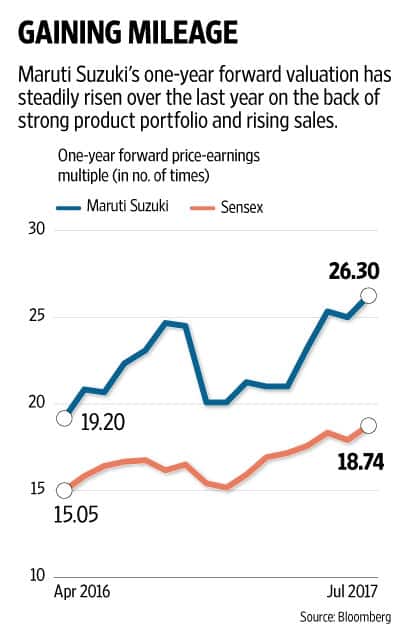 Still, the stock held out. Perhaps investors were awaiting clarity on the margin miss, which was only detailed in the conference call after market hours. Maruti Suzuki’s shares, which have rallied four times more than the benchmark Sensex in a year, closed a tad higher at Rs7,592.30 apiece. At this price, the firm commands a rich valuation of 26 times the estimated FY18 earnings per share.

What keeps the stock ticking? It is investor faith in Maruti Suzuki’s story of premiumization of its product portfolio. Its recent models have been runaway successes. The management also reiterated in the analysts’ call that the average waiting period is still 16 weeks for its new range of vehicles. This would bring down the discounts offered and improve realizations.

Besides, there is increasing confidence in the company’s ability to indigenize production and contain cost increases. Royalty for some new models may be paid in rupee terms, which would bring down earnings fluctuations due to currency movements.

Maruti Suzuki would gain from macroeconomic tailwinds too. A report by HDFC Securities Ltd says that falling interest rates, growing rural demand with its wide dealer network and the growth in retail spends due to the 7th Central Pay Commission will keep volumes growing in the next couple of years.

In other words, after the GST-led blip, the company is likely to get back on course to sustain current valuations.