During the past five years, Punjab and Sind Bank (PSB) witnessed strong growth in business, with advances growing at a robust 36.2% compounded annual growth rate (CAGR) and deposits increasing at a 28.2% CAGR.

Growth over the past five years was around 1.5–1.6 times the industry growth, which resulted in market share gains in both advances and deposits. The bank was able to sustain reported net interest margins (NIMs) in excess of 3.0% for the past five years, except for FY10 (2.7%). However, the current account savings account (Casa) ratio fell down from 52.1% in FY06 to 25.0% in FY10.

In terms of slippages also, the bank has been able to keep slippages well within 1.0% over FY07–10, which is commendable compared with its peers that saw their slippages jump up during the subdued growth environment of FY09. The bank also has around Rs900 crore of technically written off accounts, which provides a large pool for recoveries which will go straight to income. Already recoveries from written-off accounts have been strong, ranging from Rs100–200 crore each during FY07–10 and at Rs64 crore in the first half of FY11. The bank has a provision coverage ratio (86.8%) well in excess of the required ratio (70%), providing further buffer from asset quality pressures.

Attractive valuations: The bank’s low Casa ratio is expected to lead to NIM pressures in the current rising rate environment. Considering the recent hikes in fixed deposit rates by many banks and the resultant sharp correction in stock prices, especially of low Casa banks, the timing of the issue seems somewhat inopportune. However, we believe the issue’s attractive pricing factors in the expected NIM pressures, when compared with relative valuations of peers with similar low Casa ratio. The bank’s peers are trading between 0.9 times and 1.1 times estimated FY12 adjusted book value; while at the upper end of the price band (Rs120), the bank will trade at 0.8 times estimated FY12 adjusted book value.

Strong business growth: During the past five years, PSB witnessed strong growth in business, with advances growing at a robust 36.2% CAGR and deposits increasing at a 28.2% CAGR. 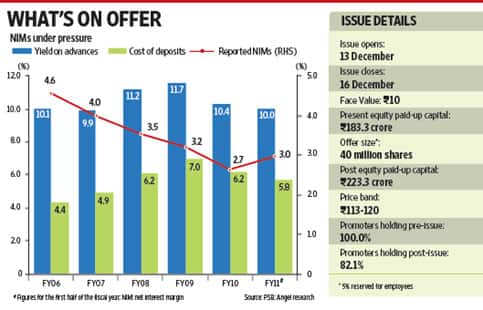 Consequently, the bank’s NIMs came under pressure and dropped from 4.6% in FY06 to 2.7% in FY10 and 3.0% in the first half of FY11. The management expects to maintain or improve NIMs from hereon.

Operational efficiency improving: During the past five years, the bank’s cost-to-income ratio has come down from 61.8% as of FY06 to 45.0% in FY10 and 51.2% in the first half of FY11, primarily on account of strong operating performance and a around 15.7% decrease in employee base over the same period.

As a result of strong business growth and a decrease in employee base, business per employee has gone up considerably from Rs2.8 crore in FY06 to Rs10.5 crore as of the first half of FY11.

Edited excerpts from a report by Angel Securities. Your comments are welcome at mintmoney@livemint.com