Central banks have a tiger by the tail

Markets are basking in the warm glow of Yellen, Kuroda and ECB governor Mario Draghi's unconditional support. But the risk is the irreparable damage such a policy does to central banks' credibility

Are the markets realizing at last its central bank gods have feet of clay? After much nail-biting when Bank of Japan governor Haruhiko Kuroda’s big bang turned out to be a whimper, markets staged a relief rally when US Federal Reserve chair Janet Yellen expectedly didn’t raise interest rates, only to start worrying whether Fed will hike in December.

Regardless of what happens in December, a look at the accompanying chart should provide some solace to the markets. The chart shows Fed’s own median forecasts of Fed funds rate, unemployment, inflation, core inflation and gross domestic product (GDP) growth at the Federal Open Market Committee (FOMC) meeting last December, when it raised Fed funds rate to 0.25-0.5% and at its recent September 2016 meeting. 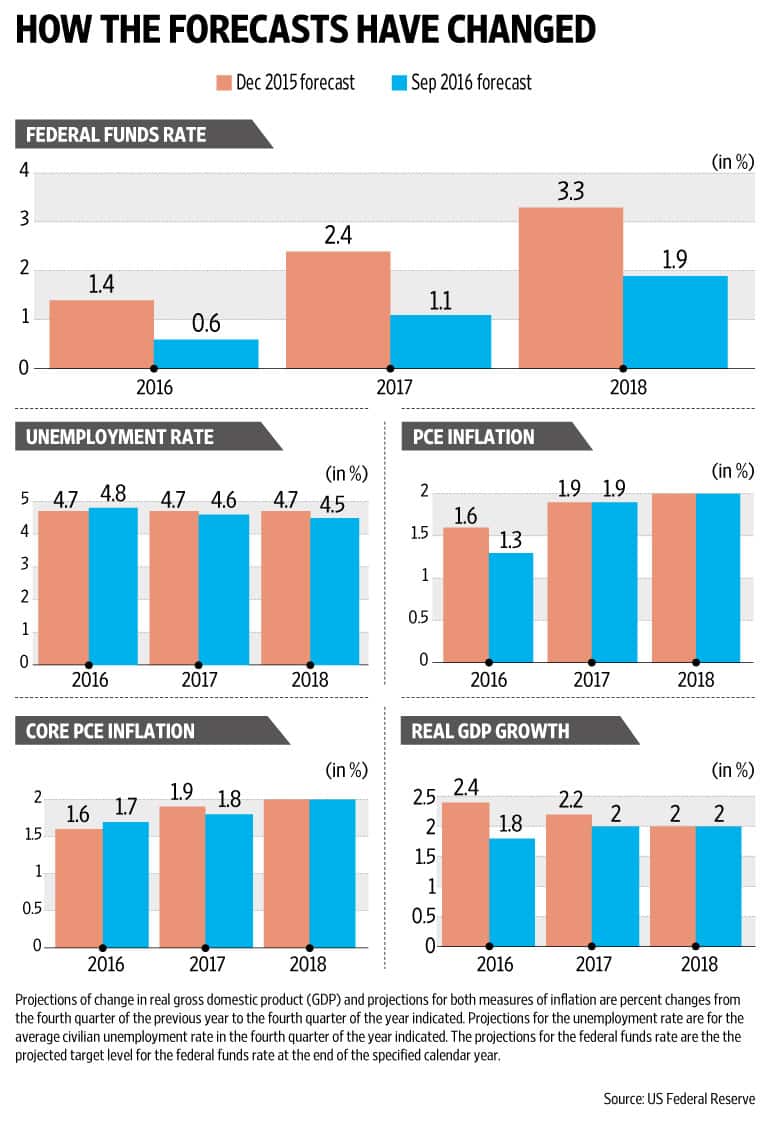 Why have Fed’s own projections for its rate increases come down so dramatically? As the chart shows, the unemployment rate projected for 2016 last December is only slightly below the current forecast and the forecasts for 2017 and 2018 are in fact lower now than they were last December.

Is it inflation? True, headline inflation projections for the current year are lower than they were last December. But the forecast of core PCE (personal consumption expenditures) inflation for end 2016 is actually higher now than it was in December 2015. Nor is there any big change in forecasts for the next two years.

The message from Fed’s numbers is US growth is going to be lower for longer, which in turn means US interest rates are going to be lower for longer. And here’s the clincher that shows monetary policy is going to remain ultra-low for a long time. The data from the chart shows that Fed’s real policy rate (the Fed funds rate minus inflation) is predicted at -0.7% by the end of this year, at -0.8% by the end of next year and at -0.1% by end-2018.

Why then keep rates so low, even as warnings about the ill-effects of such a policy abound? The answer is that central bankers are mortally afraid of puncturing the bubble in asset markets. They have a tiger by the tail. True, markets are currently basking in the warm glow of Yellen, Kuroda and European Central Bank governor Mario Draghi’s unconditional support. But the risk is the irreparable damage such a policy does to the central banks’ credibility.