Mumbai: The income-tax (I-T) department in New Delhi is scrutinizing at least 6,000 frozen demat accounts to trace unaccounted-for money and undisclosed stock market transactions between 2006 and 2008. 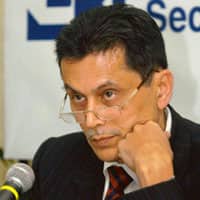 Foresight: Sebi’s C.B. Bhave had warned in 2007 that all market intermediaries should learn from the fraudulent IPO allotment case. Santosh Hirlekar / PTI

A demat, or dematerialized, account is used to buy, sell and hold shares, much like a regular bank account, except that it holds securities instead of money. Investors don’t need to possess physical certificates to show they own these shares, which are stored electronically in the account.

Another senior income-tax official, based in Mumbai, who also didn’t want to be identified, said National Securities Depository Ltd (NSDL) and Central Depository Services (India) Ltd (CDSL), India’s two biggest depositories, have handed over details of demat accounts with huge balances that have been frozen.

The depositories handle most of the securities held and settled in dematerialized form in the Indian market.

The tax department in New Delhi has forwarded details of about 2,000 frozen demat accounts to its Mumbai branch for further investigation.

The tax investigation has its roots in an initial public offering (IPO) scam the Securities and Exchange Board of India, or Sebi, the capital market regulator, uncovered in April 2006 when the stock market was in the middle of a bull rally. In that scam, fictitious demat accounts were used to corner large chunks of shares meant for allotment to small investors.

The transactions were later transferred to the accounts of large financiers who funded the share applications in the first place. Under Sebi norms, 35% of any IPO is kept for retail investors.

In an emailed response to queries from Mint, Shishir Jha, commissioner and spokesman for the Central Board of Direct Taxes, or CBDT, confirmed that the I-T department is investigating the demat accounts.

“At this juncture, I can only say that the matter is still under investigation. The department will act against anyone found to have contravened tax laws," he said.

A senior CDSL official, who didn’t want to be named, said the list includes accounts that had been frozen till October due to non-compliance with regulations requiring individuals and entities to submit their PAN, or permanent account number, that’s assigned to all taxpayers and is mandatory for opening and holding a demat account.

This official added that the department wants to probe possible tax evasion by individuals/entities. “There is a possibility that the account holders are not filing tax as they have not submitted PAN," he said. An email sent to NSDL remained unanswered.

The Mumbai I-T official said the investigation would look only for unaccounted money, while declining to give details of the account holders being investigated.

“As of now, the department has started probing demat accounts which have a balance of Rs10 crore and above," he said.

“Earlier, the department used to investigate few cases related to frozen demat accounts, but now it will go through the entire list to ascertain if there are any unexplained investments," the official added.

Data from depositories in December show that NSDL has frozen 597,000 accounts for PAN non-compliance, while CDSL has frozen around 70,000 accounts. NSDL holds 9.6 million demat accounts and CDSL around 6.4 million accounts.

The list of frozen demat accounts includes a few promoter holdings. One of them is Elder Health Care Ltd.

An executive from Elder Health Care’s key promoter Alok Saxena’s office said, “The demat account, which is frozen now, belongs to Shalini Kumar, one of the promoters of the company. The account was in her maiden name, Shalini Saxena, and the PAN was not updated." Shalini Kumar is Alok Saxena’s sister.

The executive, who didn’t want to be named, said new documentation to update the account, which has about 2,500 shares of Elder Health Care, has been submitted.

“But it seems the update hasn’t taken place yet, and we are going to follow it up with the bank now," he said.

According to a depository official who didn’t want to be identified, demat accounts holding shares of Value Industries Ltd, formerly known as Videocon Appliances Ltd, have also been frozen, and they could be promoters’ holdings.

A. Fernandes, an accounts officer for Value Industries, denied this, saying, “No demat account of promoters is frozen."

Preliminary investigations by the I-T department in New Delhi show that about 50% of the accounts are in the names of other people, or fictitious people, and some have shares pledged to banks and financial institutions before the accounts were frozen.

Following the 2006 scam, Sebi published a 252-page interim report that described the fraud as a “well-knit game by rank opportunists".

In a December 2007 interview with Mint, C.B. Bhave, who was then heading NSDL and is now chairman of Sebi, had said all market intermediaries, including NSDL, should learn from the fraudulent IPO allotment case and correct their systems to ensure similar scams do not recur.

“During the past one-and-a- half years, we have taken some steps to make sure that fraudsters cannot take the system for a ride," Bhave said then. “The depository, on a weekly basis through a software, finds out whether common addresses exists for more than 10 accounts and if they do, the depository participants are asked to check the genuineness of the clients."

C.H. Unnikrishnan contributed to this story.