Containers, which account for about half of India's exim trade volumes, grew by a decent 5.2% in August

Trade volumes at major ports may have grown by an unexciting 2% in August. But market participants are seeing a silver lining in the underlying export import (exim) data.

Containers, which account for about half of India’s exim trade volumes, grew by a decent 5.2% in August.

So far this fiscal year, they are up 4.3%, better than the 2.4% rise in the year-ago period, shows data compiled by ICICI Securities Ltd. 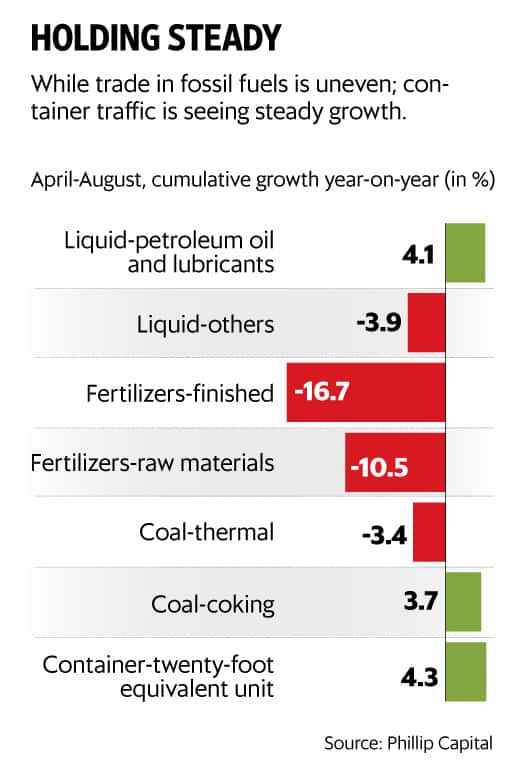 According to Maersk Line, improving trade with mature markets—Europe and Americas—can help container volumes maintain the positive growth momentum in the rest of the calendar year also.

While the full-year growth may still be in single digits, anaemic global trade means India’s exim numbers are seen as a bright spot, especially by trade liners and logistics solutions providers.

“We can expect Indian trade to clock 8-9% growth for the full year 2016, which will be four times the growth of global trade," Maersk Line said in a statement.

Non-ferrous metal prices may flatten out in second half

The near-term outlook for non-ferrous metal prices indicates a flat trend in the second half of fiscal year 2017, after an uptrend in the first half, according to ratings agency Icra Ltd.

Since global capacity utilization is 80%, if rising prices prompt higher output, prices could get affected.

In the domestic market, apparent consumption in the first quarter was healthy, with a 25% increase in aluminium consumption over a year ago, 10% in copper and 13% in zinc, due to higher demand from power transmission and distribution, and the automobile sectors.

Icra cautions high consumption levels may not continue, especially in aluminium, as they may be partly due to an inventory build-up. Its longer-term outlook for base metals remains positive.

Prices are now 9.5% higher compared to the September quarter, according to HDFC Securities Ltd. This is detrimental for cement companies. Cement companies are expected to take a hit due to higher petcoke prices starting in the September quarter in some measure, especially those without a high forward cover, according to the brokerage firm.

While cement companies have taken price hikes in some regions, it may only help set off the increase in operating costs. “We remain negative on large caps on prohibitive valuations," said HDFC Securities.