12-year gold bull run is over for now

After 12 years of an uninterrupted rally, gold prices faltered for the first time in the second half of 2011. Since then, global gold prices have corrected nearly 45% from their peak of $1,900 per ounce. Legendary investor Jim Rogers, in an interview published in businessinsider.com in July 2013, said that a 40% correction from peak is not uncommon for a commodity that has rallied for so long. He, in fact, didn’t rule out a correction of another 5-10%.

Most of the correction happened in 2013, when prices fell nearly 28%. This was accompanied by slowing demand as well. This leads to two questions: are the global gold prices low enough to see demand revive, and is there still a downside risk to prices?

The rally that went too far

In theory, the fact that gold prices rallied non-stop for 12 years isn’t surprising given that prices really hadn’t moved much for 20 years before that. But towards the last leg, the speed picked up substantially. From the start of the rally in January 2000, when gold was trading at around $290 per ounce to its peak in September 2011, prices went up at a compounded annual growth rate (CAGR) of around 25%.

According to Naveen Mathur, associate director, commodities and currencies, Angel Broking Ltd: “After the financial crisis, the rally in gold picked up pace due to monetary easing in developed countries. There were also concerns on inflation as crude prices were quite high at the time. Risk assets were not doing well; there was abundant liquidity but nowhere to invest."

All these factors put together meant a price surge supported by rising demand. But the world has changed since. 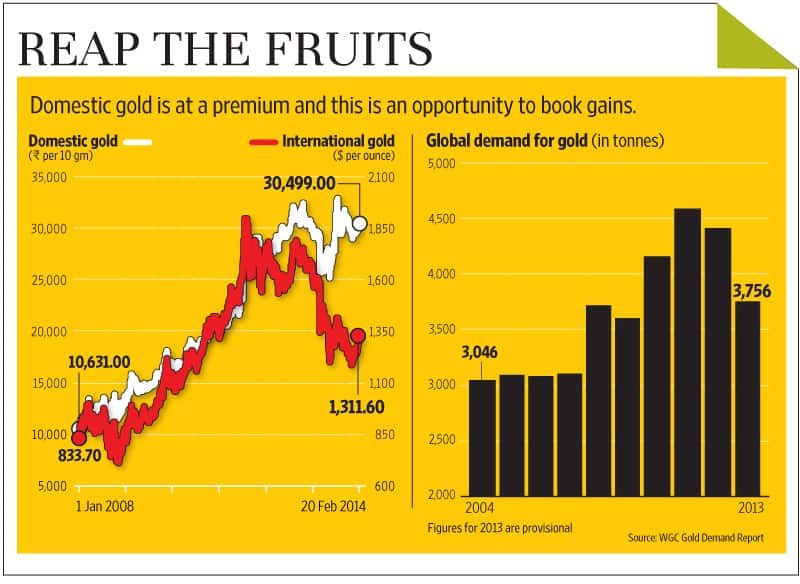 The US economy is showing signs of recovering, as is the global economy. Rising dollar and US treasury yields mean that central bank purchases of gold are already slowing. Says Hitesh Jain, senior analyst, commodities, India Infoline Ltd: “Gold is like an alternative currency. Now that the struggles of US dollar are over, prices may remain subdued from here on."

Globally, gold demand peaked in 2011 at around 4,590 tonnes and has fallen to around 3,760 tonnes (provisional data from World Gold Council, WGC) in 2013, mostly due to selling by exchange-traded funds and lower demand from central banks.

Additionally, the quantitative easing or the liquidity stimulus is now considered less necessary and is slowly being pulled back. So, the pillars that were till recently supporting higher gold prices are thinning, and attention is shifting to risk assets such as equity. Experts say that the downside for gold is restricted to around $1,150 per ounce, below which production becomes unviable.

On the other hand, gains are limited too. If global economic recovery picks up pace, then in the short to medium term, we could even see some minor fall in prices. Sudheesh Nambiath, India Analyst, GFMS, Thomson Reuters, says, “The risk-on sentiment and popularity of equity market continues to prevail for now. Gold should gain some traction by the last quarter of the calendar year."

However, not everyone agrees with this. Some experts suggest that the downside could be limited and short-lived. According to a report by Renisha Chainani, manager, commodities research, Edelweiss Comtrade Ltd, WGC believes that while the general consensus appears to be that the US Federal Reserve will continue to taper during the year, the gold prices already reflect these expectations. The report adds, it is likely that the US recovery will be weaker this year and monetary policies will be amended to reflect this—a positive for gold.

Risk is higher in India

Domestic gold prices are trading at least 6-7% higher than global prices. We import almost all the gold we consume. So, the domestic price of gold is largely dependent on the exchange rate or the value of the rupee versus the dollar. In August last year, when the rupee fell sharply to around 69 to a dollar, gold prices shot up briefly almost to 33,000 per 10g. Now, the domestic gold price premium is enhanced by the import duty being increased to 10% last year and the 80:20 scheme where gold importers are required to provide 20% of the imported gold to jewellery exporters.

More recently, as the current account deficit has fallen from its peak in 2013 and the global economic scenario becomes more affable for risk assets, it is unlikely that domestic gold prices will remain at a level of 30,000 per 10g for much longer. An anticipated roll-back of the import duty and removal of the 80:20 scheme for import will also reduce prices a bit. Mathur says, “As and when this scheme is removed, supply will come back. That means demand and supply may be matched and prices may fall." He adds that a more medium-term equilibrium in domestic gold prices will also depend on the outcome of the general elections and the policy that will evolve.

This will have an impact on foreign fund flows and the rupee value. If the outcome is positive, and the rupee appreciates, domestic gold prices could go down. Mathur adds: “The upside in prices will be dictated more by global gold, and there the outlook is not bullish. So, a range of 26,500-30,000 (per 10g) is likely."

This means there could be some pain for investors in the short term.

Gold is not a productive asset—no income such as interest or dividend gets generated from investing in gold. It does, however, preserve value and investors lap it up in times of turmoil. In India, gold is the preferred store of monetary value. Nambiath says, “The demand has undoubtedly increased in India after the financial crisis. It is the most easily understood asset for investment in any section of the society and that will continue."

There are other financial market dynamics as well that support gold buying in India.

As a hedge for money to maintain value alongside inflation, it is recommended that only 5-10% of your portfolio should be invested in gold. However, given our penchant for gold (until last year, we were its largest consumers globally), many of us may have much more than 5-10% gold in our investment basket.

At present, there is an anomaly—domestic gold prices in India are trading at a premium despite a bearish trend in global gold. Therefore, this is a good time to offload some of that excess gold as there could be more downside in domestic prices once import policy is reversed. Globally, too, it will be some time before there is a rally from this point on.

In the long term, given the limited supply of gold, an uptrend may resume eventually. But a sharp rally like what we saw in the past 10 years is unlikely anytime soon, especially since the global economic growth and state of corporate earnings are improving, making other assets more desirable.