Foreign institutional investors (FIIs) have pulled out $1.5 billion from Indian shares so far in February

“Our global strategists like Korea, Indonesia and Brazil the most, but are neutral India. Other markets look more attractive, compared to India. Earnings growth has to come by, and all the current noise around PNB is also hurting," said Gautam Chhaochharia, head of research at UBS Securities India Pvt. Ltd. 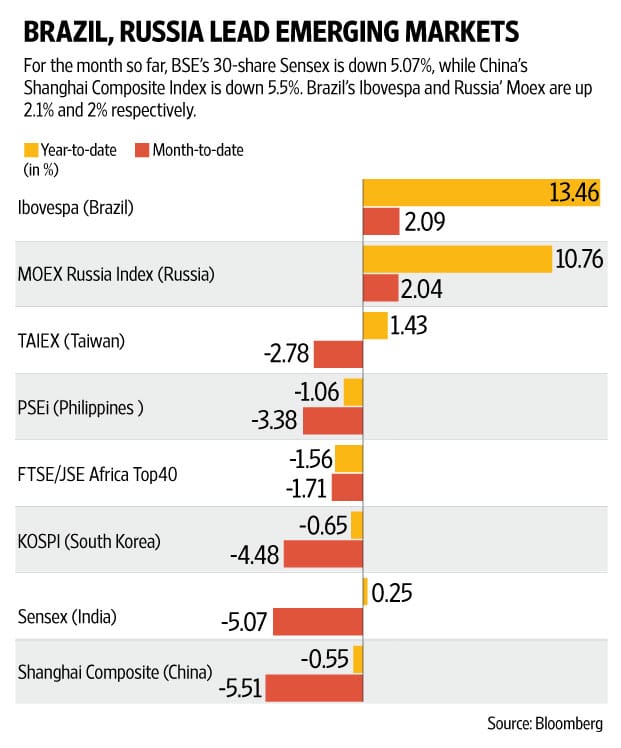 Corporate earnings showed the first signs of recovery in the December quarter as the negative effects of demonetization and the subsequent goods and services tax (GST) implementation started to reverse, but analysts stopped short of calling it a full-fledged turnaround.

“A year ago, India was the market with least hassles in its path, but now, other emerging markets look better off in comparison," he added.

Foreign institutional investors (FIIs) have pulled out $1.5 billion from Indian shares so far in February, following a sell-off in the US market which had worsened due to leveraged trade on volatility-linked products.

At the same time, domestic institutional investors (DIIs) jumped right back in after lacklustre interest in January, pumping in a net of Rs13,760 crore in the asset class so far this month, helping the Indian market curb some losses.

Brazil’s Ibovespa and Russia’ Moex are up 2.1% and 2% respectively.

For Shankar Sharma, vice-chairman and joint managing director of First Global Securities Pvt. Ltd, Brazil is the top pick among emerging markets, as he is very bullish on commodities, while India was the least preferred market among BRIC peers. BRIC stands for Brazil, Russia, India and China.

“Macros have improved drastically. Politics has gotten its act together," Sharma said of Brazil.

“Within BRIC—India is now fourth—because macro challenges are building up. Inflation will be rising fairly sharply over next several months, as commodity prices get stronger," said Sharma.

For some, India still was one of the top bets in emerging markets; however, even they see 2018 as a flattish year.

Patankar believes that US interest rates will firm up in 2018, with at least 3-4 rate hikes.

“If such is the case and the DXY (US Dollar Index) strengthens/stabilizes, there will be headwinds for EMs as local central banks have limited room to cut and yield differential flows abate," said Patankar.

“That said, in EMs, I expect the earnings cycle to kick in and we should see steady numbers. India will be a bit bumpy in 2018 especially as politics, crude, fiscal (situation)on the one hand produce headwinds and earnings provide a tailwind. I expect a flattish 2018 at best in India," added Patankar.

While the PNB fraud bothered some, it didn’t tarnish the image of India as an investment destination.

On 14 February, state-run PNB said it has unearthed fraudulent transactions of around Rs11,400 crore in one of its branches in Mumbai and filed a complaint with the Central Bureau of Investigation (CBI) on the fraud amid concern that the contagion could spread to other banks.

The case involves fraudulent transactions by Nirav Modi and Mehul Choksi, who are under investigation by multiple probe agencies.

In July last year, US bank Wells Fargo admitted it may have forced customers into unwanted products and improperly closed accounts or frozen funds.