Being a bundled product, changes on the investment side affect the insurance component as well

Ever since the Insurance Regulatory and Development Authority (Irda) put in place product design guidelines spelling out cost caps, and trimming exit loads (or what you know as surrender charge) to a bare minimum, unit-linked insurance plans (Ulips) have turned into a new leaf. At the same time, costs in mutual funds (MFs) have gone up, making some Ulips better than MFs in terms of cost.

Given the cleaner product structure, some insurers have started focusing on selling Ulips even though most prefer to stick to selling traditional plans. “The current charge structure is more customer friendly. The surrender charges are a bare minimum in the initial years and nil after the fourth year, which makes Ulips very cost efficient and a good value proposition for long-term investors," said Niraj Shah, senior vice-president, and head-products, ICICI Prudential Life Insurance Co. Ltd, one of the insurers that sell more Ulips than traditional plans. In the first quarter of FY15, Ulips comprised over 78% of its product mix.

But Ulips are bundled products. And since they put insurance and investments together, your decision can’t be based on costs alone. You need to take an all-round look from an insurance and an investment standpoint. Here’s why it’s not a good idea to mix two financial needs. But if you are keen to buy a Ulip, then read on to understand what to look for in such a plan.

Ulips come with a lock-in of five years. This means that for the first five years, you can’t withdraw your money. So, if you are cash strapped and need to liquidate some investments, Ulips will not help. Therefore, with Ulips, be sure to have a long-term horizon.

The front loaded nature of a Ulip also discourages early liquidity. The rules currently allow such plans to levy charges in a way that the net reduction in yield is not more than 4% in the fifth policy year, coming down to a difference of 2.25% by the 15th year and thereafter. This means that if your fund value is growing at 10%, then all cost heads, except mortality charge, put together should be such that the net return on your investments is not less than 6% by the fifth year and not less than 7.75% by the 15th year. 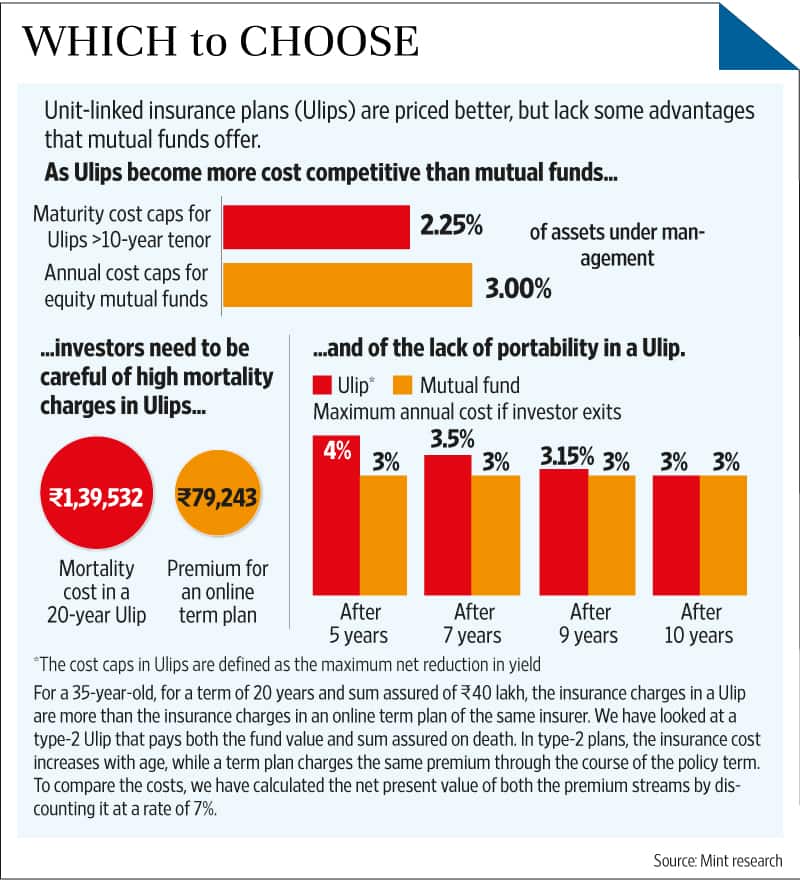 In comparison, other financial products, such as an MF, have expense ratios that are evenly spread out through the course of the investment.

This means that even if your Ulip outshines on maturity from a cost point of view, in the initial years, it is saddled by the weight of charges. “Ulips start to do better usually from the 10th year onwards. Only investors who have a long-term horizon should look at Ulips," said Kapil Mehta, managing director, SecureNow Insurance Brokers Pvt. Ltd.

In other words, if you quit midway, even without a surrender charge, your Ulip may not do well.

The front-ended nature of Ulips also makes portability difficult. “As of now, Ulips allow you to switch between funds but the choice is limited, and a person will rarely want to switch from an equity fund to a debt fund," said Srikanth Meenakshi, founder and director, FundsIndia.com. In the case of Ulips, when you port your policy from one insurer to another in the initial years, you end up bearing the brunt of front-ended costs twice, and this may dilute the plan’s cost efficiency.

We are, however, starting to see some exceptions. Take, for instance, Click2Invest, an online Ulip by HDFC Standard Life Insurance Co. Ltd. This plan does not have front-ended costs such as the policy allocation charge, and it does not even charge a recurring policy administration charge. It only has a fund management charge of 1.35% of the fund value per annum and a mortality charge that decreases and becomes nil once the fund value becomes equal to the sum assured. This is a type-1 Ulip with a fixed sum assured of 10 times the annual premium if you are below 55 years of age.

Ulips aren’t only about investments; you also need to think about how portability affects insurance cover. When you buy a new Ulip, you also buy fresh insurance cover, which could mean high mortality charges. This will affect returns.

Plus, an exit from your Ulip will also imply bidding farewell to the insurance cover as well. “When you buy a bundled product, two individual financial needs are put together. You can liquidate your Ulip in case you need money, since the surrender charges are minimum, but you will have to let go of the insurance component as well. And buying insurance at a later date may cost you dear," said Pankaj Mathpal, a Mumbai-based financial planner.

You must also remember that the mortality charge in a Ulip may be more expensive than an online pure term cover. “Mortality costs in Ulips are about 50% higher than the costs in online term plans. This is primarily because Ulips are not medically underwritten whereas term plans are. The other reason is that mortality costs are excluded from the calculation of net reduction in yield and cost caps, so insurers can make mortality related profits," said Mehta.

As an example we looked at the illustration of a type-2 Ulip for a 35-year-old male for a term of 20 years, sum assured of ₹ 40 lakh and an annual premium of ₹ 1 lakh. Being a type-2 Ulip—the sum assured as well as the fund value on death will be paid—the mortality charge increases with age. In a term plan, the premiums remain the same. So, to get a better handle on costs, we calculated net present value by discounting it at 7% for both the plans. The Ulips cost ₹ 1.39 lakh whereas the term plan cost ₹ 79,243 (see table).

It’s important to look at mortality cost because it is not included in the cost caps and can drag down returns considerably. This is especially true for very high sum assured or when older people opt for Ulips.

There is little doubt that Ulips have become much better than before and insurers that are focusing on Ulips in their portfolio are making serious efforts to make these more cost efficient. From a pure numbers standpoint, as costs in Ulips have come down but gone up for MFs, some Ulips may outshine MFs. But you can’t overlook the downsides of investing in a bundled product.

It’s still early days for the new Ulips and given that some insurers that have turned their attention to selling Ulips are taking steps to make these a value proposition for customers, we are hopeful that other dimensions that stop us from recommending Ulips will be taken care of eventually.