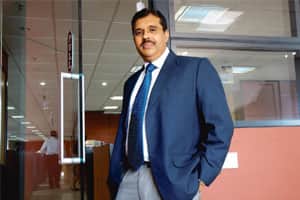 What was on your agenda when you joined DBS Chola?

I had to ramp up my investment services and sales and marketing team. Proper leadership was required and we did not have the right people in many locations. I also had to build the fixed income funds team from scratch. The team had seen a lot of changes and debt funds call for a special skill set compared with any other treasury operations, especially after the October 2008 crisis. I did not disturb my equity fund management, but we supplemented it with analysts, whose experience was equal to or more than that of fund managers.

Then, the funds had an uneven performance and there was a need to strengthen our internal processes—while giving fund managers enough freedom—to ensure our portfolios met certain standards.

We also needed to make the fund house more acceptable. That was tough given our limited budget for advertising in newspapers or television.

True, we are skewed to debt and money in debt can come in and go out in fairly large tranches. Therefore, our focus is to get more retail investors. This is not an overnight exercise, but we are at it. We have already expanded from 19 centres at the point of acquisition by L&T Finance to 34 locations as on date. We should (establish) about 41 centres in about a month’s time and (be) at 56 locations by the end of June.

We are seeing modest results. In March, while the industry on an average saw redemptions, our fund house saw net inflows into our equity funds. We have done some publicity for our performance.

We saw your recent advertisements of your equity funds returning 100% or more. Are absolute returns, such as these, more important or risk-adjusted returns?

Our intention was not to entice people with absolute returns that had been exhibited in the past. The intention was that L&T Asset Management Co. Ltd as a brand stands for professionalism and a foundation based on principles.

We felt that the first step we need to take is to say that a large number of our equity funds were delivering attractive performances. Further, this was not in isolation. It was on account of our growing investment team and improved processes that we had put in place in the last year-and-a-half that we were now delivering results.

In future, if we can publicize our risk-adjusted return performance and other such qualitative aspects, we would be doing that also. For instance, we now disclose 100% of the portfolio on our website every month, unlike earlier.

For a small-sized fund like yours, is it difficult to monitor many stocks?

One of the initial steps I took was to reduce the number of stocks. When I joined DBS Chola, I observed that we were exposed to 220 companies despite having a small team. I felt we had to rationalize. So we did two things. We increased the size of the research team.

We also encouraged fund managers to shoulder some of the research responsibility and we reduced the number of stocks to 145. As our size grows, we shall be in a position to increase our team’s size and bring in more stocks.

Only time will tell. As a fund manager, I had to present my fund in the past also. Now, it is perceived that the role of the CEO is only to market the fund. But that may not be true. A CEO also needs to be sensitive to the finer aspects of fund management, such as the product’s quality, its message and how best we can communicate these qualities to our investor. Being a fund manager for many years gives me the insight to focus on processes that make performances stronger and consistent.